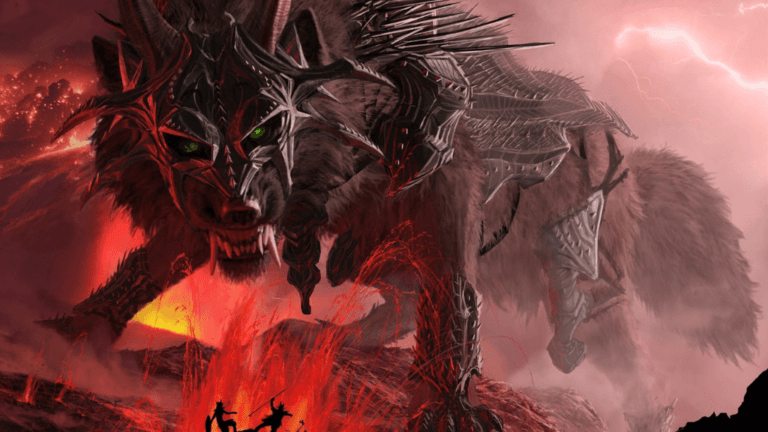 Norse mythology is full of fearsome beasts with the power to wreak havoc over the nine worlds of the Norse cosmos.

One of the most important and dangerous among them is the mighty Norse wolf Fenrir. A beast of terrifying strength, he stands out among the Norse beasts as he is destined to kill Odin himself during the final apocalyptic battle of Ragnarök.

Read on to learn more about the monstrous Norse wolf Fenrir.

Fenrir is one of the children of the trickster god and giant Loki, and the giantess Angrboda.

This means that he is not in fact a wolf, but rather born of the race of giants.

While enormous size was not a characteristic of the Norse giants, Fenrir did grow to a huge size, so that his open jaws could reach from the ground to the sky. The Norse wolf also had prodigious strength.

Fenrir is one of three children of the giant pair, the others being Jormungandr, also called the Midgard Serpent, and Hel, the giantess who rules over Helheim, one of the Norse lands of the dead.

These children of Loki and Angrboda were considered so dangerous and monstrous, that the gods of Asgard decided that they needed to protect the Norse cosmos from them, by placing them where they could do the least harm.

Aesir gods threw Jormungandr into the waters surrounding Midgard, the world of men, and sent Hel to the underworld. Fenrir, the most fearsome of the three, they knew that they needed to imprison.

The Imprisonment of Fenrir

Imprisoning Fenrir was no easy task, even for the gods, as the great strength of the Norse wolf meant that he could break any chain. The gods attempted to restrain Fenrir twice with chains they had made.

The first was called Leyding, which they convinced Fenrir to put on as a show of his strength, as he could easily break the chain. This was true, and Fenrir snapped it apart with a single sharp kick.

The gods then made a chain twice as strong, called Dormi, which Fenrir again broke easily.

Desperate for a way to restrain the beast, the gods asked the dwarves, the master smiths of the Norse universe, to construct a chain that could not be broken by the Norse wolf.

The dwarves created Gleipnir, which resembled a ribbon more than a chain, but was indestructible. The fetter was made from six impossible things:

This combination of impossible elements enchanted the chain to do the impossible.

This time the gods invited Fenrir to the isolated island of Lyngvi, and again challenged him to show his strength by putting on this new shackle, and then breaking free.

Fenrir was suspicious of the request, considering the lightness of the ribbon. He only agreed to participate in the game if one of the gods would put their hand in his mouth, as a show of good faith that the gods would not leave him imprisoned if he could not break the chain.

Naturally, knowing their plan, the gods were reluctant to agree to this request. However, eventually, the god Tyr proved brave and self-sacrificing enough to offer his hand according to the Prose Edda. Fenrir allowed himself to be shackled to the rock Thviti by Gleipnir.

When Fenrir found that he could not escape, and when he realised that the gods would not free him and that this was their plan from the beginning, the Norse wolf tore off Tyr’s hand.

The howling of Fenrir as he realised his fate allowed the gods to wedge a sword into the wolf’s open mouth, silencing him.

Being wedged open in this way, huge amounts of drool flowed from the Norse wolf’s mouth, which formed a river which the Norse called ‘Expectation’, a clear reference to the prophecy that Fenrir would play an important role in the Ragnarök apocalypse, including killing Odin himself.

Despite being aware of Fenrir’s role in the end of the world, according to one source, the Aesir gods did not simply slay the wolf because they so respected their hold places, including the island, that they did not want to taint it with the Norse wolf’s blood

According to the Ragnarok prophecy (Poetic Edda) of Norse mythology, when the apocalypse begins, the Norse cosmos will be shaken by earthquakes.

This will destroy the rick to which Fenrir is anchored, and the Norse wolf will have grown to such size and strength that he will be able to break his chains.

Free, Fenrir will rampage through the nine worlds, with his mouth still wedged open by the sword, devouring everything before him. Fenrir will be accompanied in this by his two wolf children, Skoll and Hati, who have been chasing the sun and the moon for an age.

These two wolves will finally catch their prey, devouring the sun, moon and stars, plunging the Norse universe into a timeless and chaotic darkness.

When Fenrir reaches Asgard on his rampage Odin will meet him in battle, but the Norse wolf will prove victorious, and devour the king of the Aesir gods. Odin will be avenged by one of his sons, Vioarr.

He will have a magical boot that allows him to stand in Fenrir’s mouth without being desired. This will allow him to use his mighty strength to kill the wolf by ripping its jaws apart. But Fenrir’s death will shortly be followed by the death of all things and the end of the Norse world.

The final battle between Odin and Fenrir is depicted on a 10th century runestone from the Isle of Man that shows a bearded man with his right foot in a wolf’s mouth and holding a spear towards the wolf’s head.

This is thought to represent Odin being devoured, as a spear was one of Odin’s attributes. On the other side of the stone is a scene though to represent Christ’s triumph over Satan. As such, this may be a piece of syncretic art, designed to draw together Christian and Pagan beliefs as part of the conversion process.

In Norse mythology Fenrir was a symbol of the chaotic forces of the universe, which take strength, courage and ingenuity to overcome.