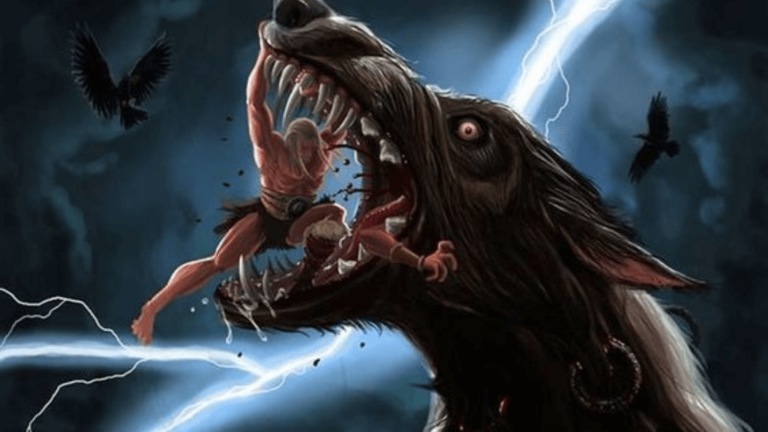 Vidar is one of the many Aesir gods venerated by the Vikings, but little knowledge has come down to us about him. However, although he is obscure today, he seems to have been an important deity in the Norse pantheon.

One of the many sons of Odin the Allfather, Vidar was known by several kennings. He was Vidar the silent, the possessor of the iron shoe, the enemy and slayer of Fenrir, the avenger, and he who inhabits the homestead of his father.

These kennings offer an interesting glimpse of the character and importance of Vidar. Today’s we will dig into exactly what we know about this Viking god.

Vidar was one of the many sons of Odin, very few of which the chief of the Aesir gods produced with the giantess Gridr.

Balder the beautiful, destined to be slain by Loki and therefore put the events that will result in Ragnarok into motion, is the only son that we know Odin had with Frigg.

Thor is the son of Odin with the goddess Jord, who is also considered the embodiment of the earth itself.

Vidar is the son of Odin with the giantess Gridr. Very little is known about her, but her name means vehemence of violence.

She also features in the Prose Edda where she helps Thor on his journey to the land of the giant Geirrodr. She tells Thor about Geirrodr to help prepare him for the encounter and she also gives him her belt of strength Megingjord, iron gloves Jarngreipr, and her staff Gridarvol. These later became attributes of Thor.

Vidar’s name means “widely ruling”, but this does not seem to be closely linked with the powers with which he was associated.

He is described as a warrior god and an excellent fighter. It is said that only Thor had greater strength than Vidar.

But unlike Thor, who seems to have been quite boastful, Vidar is known as the silent god.

This is thought to reflect the connection between Vidar and vengeance. It may simply reflect the fact that vengeance is a quitter kind of violence, or it may specifically reflect rituals associated with revenge combat. It is thought that rituals before this type of fight may have involved remaining silent, perhaps as a form of cleansing.

The Vikings believed that a man offended had the right to challenge another man to a duel, called holmgang. In theory, you could challenge anyone, regardless of social status, and it would bring great shame to refuse.

When making offerings to Vidar, the Vikings suggested burying a weapon in cold water or ice. This may again associate with vengeance, and the idea of it being a cold form of violence.

As well as these icy places, Vidar was associated with wilderness. His hall is described as a place where brushwood grows and the grass is high. He is also described in one source as being happiest in nature.

But Vidar was also known as the god of the thick shoes. It is said that he was constantly adding to his shoes with pieces of leather. Shoemakers were always encouraged to dedicate off cuts of leather left over when making their shoes to Vidar.

But the association between Vidar and shoes has little to do with the art of shoemaking.

Vidar’s association with shoes and with vengeance primarily stems from the role it is prophesized that he will play in the Ragnarok apocalypse.

According to the prophecy, many of the gods will die in the great battle that ensues between the forces of Loki and the giants and the forces of Odin and the Aesir.

Odin himself is predicted to be killed by the mighty wolf Fenrir, a son of Loki.

The gods so feared Fenrir that they tricked him so that they could chain him up on a deserted island where he could do no harm. They also wedged a sword in his mouth, locking it open.

The events leading up to Ragnarok will allow the great and powerful wolf to break his shackles. He will then run through the nine worlds of the Norse cosmos, devouring everything before him in his huge open mouth.

Finally, Fenrir will devour Odin himself.

But Vidar is destined to avenge the death of Odin. His thick shoes, which are probably also enchanted, will allow him to stamp down on the lower jaw of Fenrir. Continuing to hold Fenrir’s mouth open with his mighty strength, he will drive his sword down Fenrir’s throat and into his heart, killing him.

We have already seen the sources of most of Vidar’s kennings.

He is Vidar the silent because of his association with revenge, he possesses iron shoes that will allow him to battle Fenrir, which is also why he is called the enemy and slayer of Fenrir. He is also the avenger because he avenges the death of Odin.

But why is Vidar also described as occupying the homestead of his father?

This may relate to the events that are prophesized to happen after Ragnarok.

According to the Ragnarok myth, Sutr, the fire giant, will set the world of fire with his burning sword, and that air will be poisoned by the venom of Jormungandr, who will slay and be slain by Thor. After this, the world will sink into the water.

Many accounts end there, with the end of all things.

However, some accounts suggest that the world will re-emerge from the water, and that some of the gods will survive to rebuild.

Among the surviving gods are said to be Vidar, and also Vali, another son of Odin, this time with the giantess Rindr.

It is said that they will meet in Ithavoll, a field near Asgard that survives the destruction, and there they will forge a new world, starting with shrines and temples.

So, perhaps this kenning for Vidar suggests that he will take the place of his father as the leader of the Aesir gods, therefore occupying his homestead.

While Vidar was clearly nowhere near as popular as Odin and Thor, as we do not see the same surviving dedications to him, he was clearly an important deity for the Vikings.

He is described in the Skaldskparmal, which describes the Aesir visiting Aegir to feast, as among the twelve presiding male deities at the banquet.

He is also briefly mentioned as being present at the banquet described in the Lokesena, where Loki complains that he has not been invited to the feast, and then goes on to insult all of the Aesir gods.

When Odin gives in and says that Loki should stay, he tells Vidar to pour the giant a drink, which Vidar does.

Beyond mythology, Vidar may also appear in some surviving artworks.

It is argued that these may actually be images of Christ slaying a wolf, but even if this is the case, then the story is probably inspired by the story of Vidar.

All of this suggests that Vidar had some importance among the Vikings. This is further reinforced by the 13th-century Icelandic chronicler Snorri Sturluson, who compares Vidar to Aeneas, the Trojan hero that survived the Trojan war and went on to found Rome.

Do you think that the idea of him as a silent god relates to his role in vengeance, or do you think it relates to another aspect of the deity?

Would you dedicate pieces of leather to reinforce the soles of Vidar’s shoes?

3 thoughts on “Vidar: The Silent God”