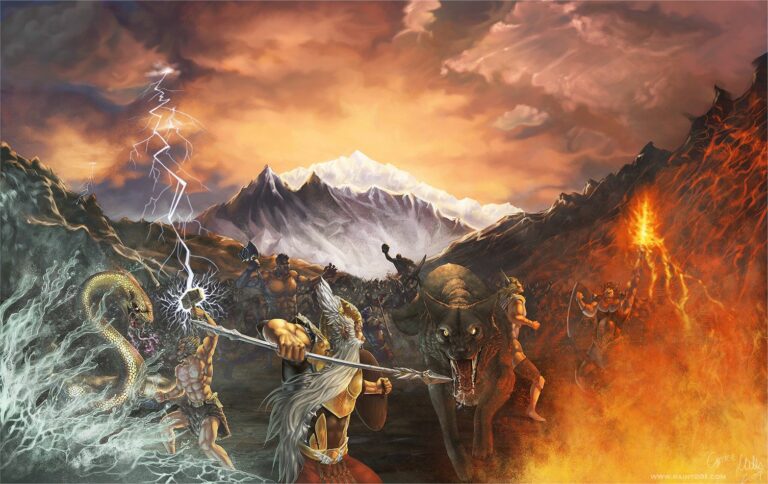 What is Ragnarok? The Real Story

Any Viking enthusiast will be familiar with the Marvel film Thor: Ragnarok and the idea that Ragnarok is the story of the end of the world in Norse mythology. But Marvel take significant liberties for the sake of entertainment and the continuity of their timeline.

What really happens in the story of Ragnarok, and why is this apocalyptic account such an important part of Viking legend?

In Old Norse, Ragnarok means ‘fate of the gods’ or ‘twilight of the gods’. Ragnarok is exactly that. It is the cataclysmic destruction of the cosmos and everything in it, including the Norse gods. But Ragnarok hasn’t actually happened yet. It is recorded in Norse mythology as a prophecy. As far as we know, the Vikings and their gods are still awaiting their apocalypse.

Records of the Ragnarok prophecy survive in three poems preserved in the Poetica Edda, a 13th century compilation of earlier traditional stories, and the Prose Edda, written in the 13th century by Snorri Sturluson. While their account of the omens that will signal the coming of Ragnarok and of the destruction of the world itself broadly match, the sources offer different interpretations of what will happen in the aftermath of the cataclysm.

While Ragnarok has not yet happened, according to Norse mythology it is inevitable and has already been set in motion by the series of events that surrounded the death Odin’s son Balder. Perhaps the key part of this story is that the trickster god Loki, responsible for the death of Balder, was imprisoned following the death of the most noble and beloved of the Norse gods. He is chained to two boulders with a venomous snake suspended above his head, dripping venom on his face. Up until this point, while Loki was fond of making mischief, he has a relatively friendly relationship with the Norse gods. This break between Loki and the Norse gods may be a prerequisite for Ragnarok.

The shackling in Asgard of Loki’s son, the great wolf Fenrir, also appears to be a prerequisite for the end of days. He was imprisoned in Asgard by the Norse gods using magical chains made by the dwarves. They also wedged a sword in his mouth, keeping it open and preventing him from biting down on anything after taking the god Tyr’s arm.

Meanwhile the world of men will experience a series of portents. There shall be a winter more bitter and cold than any other, that will last for three winters with no summer in between. The resulting hardship will rob mankind of its laws and morals and humanity will descend into chaos and war. Brother will slay brother, father will slay son, and son will slay father.

The wolves Skoll and Hati, that have been hunting the sun and moon for time immemorable, will finally catch their prey, plunging the world into darkness. The great tree Yggdrasil, which holds together the nine worlds of Norse mythology, will shudder, causing earthquakes so strong that even mountains will fall.

The dome of the earth will split open, and through the crack the giants from Muspelheim will spill into the other realms. The monstrous wolf Fenrir will break free of his shackles and run through the world devouring everything before him. Jormungand, the Midgard Serpent, that dwells in the sea and encircles the world of men, will rise from the sea, covering the earth in water and spitting his venom all over the world, poisoning the land, sea and air.

The earthquakes rocking the nine worlds will shake free the ship Naglfar from its mooring. Made from the fingernails and toenails of the dead, Loki will sail the ship to Asgard. He will be joined on board by his daughter Hel, the goddess of the realm where the dishonourable dead dwell, and the dead themselves. Of the dead condemned to Helheim, only the gods Balder and Hodr will be returned to fight alongside their Norse god kin. Loki will also be joined in battle by his two sons, Fenrir and Jormungand.

Loki’s forces will join an army of giants led across the Bifrost bridge into Asgard by Surt, who has a sword that flames brighter than the sun. He will use this sword to set the realm of the gods, and all the nine worlds, on fire.

Meanwhile Heimdall, the guardian of the Bifrost bridge, will sound his horn to summon the divine sentry of Asgard. Odin will be joined in battle by the fallen warriors passing their afterlife in Valhalla. At the side of Odin and the Norse gods, they will fight more valiantly than any man has ever fought before.

Almost all of the Norse gods will find themselves fighting to the death as part of Ragnarok.

Odin will ride his steed Sleipnir, ironically another son of Loki, into battle at the head of his army of fallen warriors. Despite their courage, Odin and his warriors will be defeated by Fenrir, who will devour them, with his mouth still wedded open by the sword placed there by the Norse gods. One of Odin’s sons, Vidar, will in turn kill Fenrir.

Wearing enchanted shoes made from every scrap of leather ever discarded by a human shoemaker, he will wedge his foot into Fenrir’s jaw and ram his sword down his throat. Odin being devoured by Fenrir is the most popular scene to appear on Viking depictions of Ragnarok. The death of Odin, more so than the death of any other Norse god including his son Thor, seems to mark the end of the world as the Vikings knew it.

Many of the Norse gods will die in a fight to the death with their mortal enemis. Hard, the wolf guardian of Helheim, and Try will slay one another. Heimdall and Loki. Frefy and Surt. Thor and Jormungand. Thor will kill Jormungand with his hammer, but he will be covered in so much venom that he himself will die only a few seconds later.

The two forces will fight until almost all are dead, and all the nine worlds are set ablaze.

The Aftermath of Battle

In some accounts of Ragnarok, at the end of the battle all the nine worlds of Norse mythology will sink into the sea, leaving nothing but the void. Ragnarok is the end of all things.

In other accounts, there is a renewal. It has been suggested that while the void represents the original pagan Norse mythology, the renewal version shows Christian influence. But we do not know for sure where the two variations come from.

In the renewal version, some of the Norse gods survive to rebuild. In particular, Odin’s son and avenger Vidar makes it, as do Thor’s two sons Modi and Magni, who inherit Thor’s hammer. Other sources suggest that Odin’s son Balder, killed by Loki as part of the series of events that leads to Ragnarok, will also return to life after Ragnarok. A man and woman, called Lif and Lofthrasir, meaning ‘life’ and ‘striving for life’, also survive by hiding in a wood called Hoddmimis Holt. Together they repopulate the world. A new sun, the daughter of the previous one, will rise into the sky.

The new Norse world will look much like the old one. The surviving Norse gods will live in Idovall, which somehow remained untouched. There they will recreate the splendour of Asgard with the finest house being called Gimli and featuring a gold roof, just like many of the structures in old Asgard. There will also be a new Helheim, called Nastrond, which means ‘shore of corpses’.

All the doors of this place will face north and the screaming cold wind. Its walls will be made of writhing snakes which pour their venom out into a river that runs through Nastrond. The thieves and murderers that find themselves there will be fed on by the dragon Nidhug.

What does this tell us about the Vikings?

What does this fatalistic view of the end of the world in Norse mythology tell us about the Vikings? We might think that it reflects a very grim view of the world, and this would be understandable.

The Vikings lived in hard conditions, as reflected by their description of new hell facing the north wind. It also seems to show a view that the future is already written, and unescapable, as even the gods cannot divert its will. Why strive when you do not have the power to change anything?

Rather than leaving the Vikings defeated, this fatalistic view of the world seems to have given the Vikings courage and strength. If one’s death is already written, you need not fear it, as it will come no matter what you do. You cannot avoid death, but you can meet it bravely.