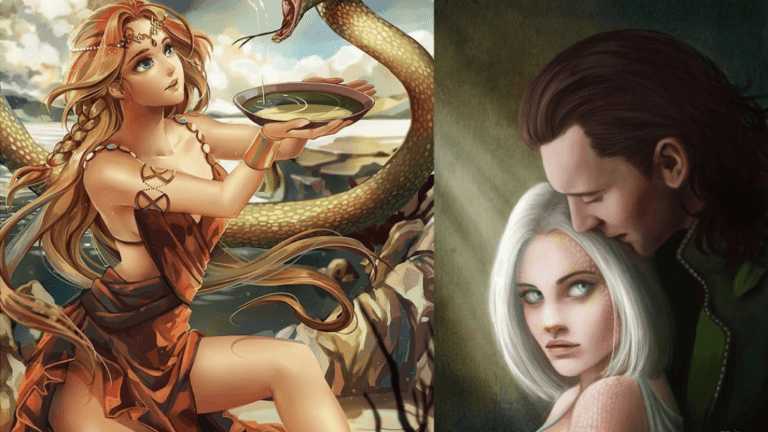 While the surviving Norse sources have a lot to say about the exploits for Odin, Thor and Loki, relatively little information is preserved about the majority of the other Norse deities.

Instead, we are left to piece them together from the etymology of their names, passing references in the surviving prose, and surviving depictions.

Sigyn is one such Norse goddess. While her name suggests that she was a Norse goddess of victory, she is mainly known as the second wife of Loki and for her devotion to him. But let’s try and discover a little bit more about this enigmatic but potent Norse goddess.

Rather, the authors who preserved these stories, mostly Christian writers who were looking to draw parallels with Christian stories and the predominantly male Christian saints, were primarily concerned with examining the stories of the male Norse deities.

Sigyn certainly appears to have been an important Norse goddess as she is listed in the Skáldskaparmál in the Prose Edda as among the principal Aesir gods and goddesses alongside the likes of Odin, Thor, Frigg, Balder and Tyr.

In Old Norse, Sigyn’s name means “victorious girlfriend”, which suggests that she was probably a Norse goddess of victory in war, described as a girlfriend, as victory is what accompanies battle.

This would be consistent with many other polytheist religions that also venerated female personifications of victory in war, alongside their male deities of war. For example, the Romans worshipped Mars as the god or war, and Victoria as the goddess of victory.

The Norse goddess Sigyn may well have been venerated by the Vikings in the aftermath of victory. Unfortunately, any record of her role in war has been lost due to the focus of the surviving sources on Odin as the god of war.

Sigyn was the wife of Loki, the trickster giant, though she was not his only wife. The giantess Angrboda was also a wife of Loki, and together they had three monstrous children: the great wolf Fenrir, the Midgard Serpent Jormungandr, and the giantess ruler of the underworld, Hel.

That Sigyn should choose to mate with a giant should not be considered unusual, as most of the Norse gods appear to have had giantess mistresses, including Odin and Thor, which whom they had children, so many of the Aesir gods were part giant.

Sigyn, as the wife of Loki, had two sons, Narfi and Vali, but very little is known about them, except about their deaths.

The Destruction of Sigyn’s Family

The most important surviving Norse story in which Sigyn figures described the destruction of her family. It begins when Loki tricks Hodr, the brother of Balder, into killing his brother as part of a game often played by the gods.

Balder was so beloved by the Aesir gods that they killed Hodr for his role in Balder’s death, even though Hodr was an unwitting patsy. Their plans to revenge themselves on Loki were much harsher.

First, they dealt with Loki’s two sons by Sigyn, even though they do not appear to have played a role in the crime. Vali was turned into a wolf, losing his senses, and tearing his own brother Narfi apart.

Narfi’s intestines were then used to chain his father Loki to three rocks in a secluded cave. There, a poisonous serpent was placed above Loki’s head to drip venom onto his face for eternity. This caused him extreme pain, causing his whole body to convulse, and send earthquakes throughout the nine Norse worlds.

We must imagine Sigyn’s pain at the loss of her sons, and what she thought of their unfair treatment for the crimes of their father. In the aftermath, she decided to stick by her husband, sitting with him in his isolation with a bowl to capture the venom of the snake and alleviate his pain. Sometimes she would need to leave to empty the bowl, and this is when earthquakes would still shake the world.

This is why Loki is sometimes referred to as “the burden of Sigyn’s arms”. Some scholars suggest that it is for her role as the wife of Loki that Sigyn is called “girlfriend”, though I personally think this unlikely.

In the prophecy of Ragnarok, the Norse end of the world, it is said that Loki will break his chains and join the confrontation against the Aesir gods. Sigyn’s role in the apocalypse is not recorded, so we must speculate as to whether she joined her Aesir brethren, or whether she continued to stand by her husband and seek vengeance for her children. Perhaps the split loyalties of the Norse goddess of victory is one of the reasons why neither side can win the battle of Ragnarok.

As far as we know, only one depiction of Sigyn survives, on the 11th century Gosford Cross found in Cumbria, England.

It depicts several scenes from Norse myth, including a long-haired woman holding an object over a bound and prostrate figure, with a serpent suspended above their heads. Surely this is Sigyn and Loki.

Interestingly, Sigyn wears her hair in a long plait, much like a Viking warrior in battle. Perhaps this is a subtle nod to her role as Norse goddess of victory.