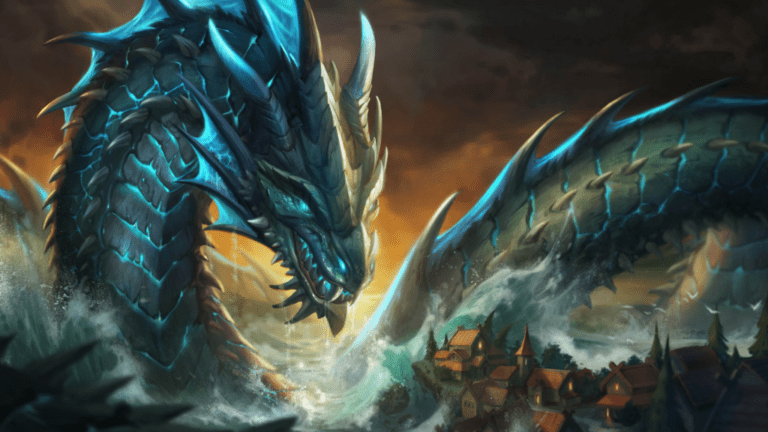 The world of Norse mythology is full of terrifying monsters, but perhaps none more so than Jormungandr, also known as the Midgard Serpent.

Maybe it is his proximity to the world of men, dwelling in the ocean that surrounds Midgard (home of human), or maybe it is our innate fear of serpents, but no other monster raises the same fear as this serpent who will trigger Ragnarok, the end of the world in Norse mythology.

While Jormungandr has the appearance of a mighty serpent, he is in fact a giant, son of the trickster Loki, who despite living alongside the Aesir gods in Asgard was a giant, and the giantess Angrboda, whose name means ‘bringer of anguish’ in old Norse.

Jormungandr was brother to two further children of the giant couple, the giant wolf Fenrir, and the giantess Hel.

Odin was so fearful of the havoc that these beings might cause on the universe that he placed each of them somewhere that they could cause the least harm.

He sent Hel to the underworld to reign over the land of the dead. He chained Fenrir up in Asgard using an enchanted ribbon made by the dwarves. Finally, he threw the then small serpent  Jormungandr into the ocean that surrounds Midgard, which is why he is also known as the Midgard Serpent.

Before this, when Jormungandr was small, he was tied to a pine tree in order to keep him under control, but Thor warned the gods to keep their distance as the serpent had spat black venom at him, but missed.

This story marks a connection between Thor and Jormungandr that will continue, and the Midgard Serpent is often characterised as Thor’s ultimate nemesis.

In this Midgard sea Jormungandr grew to such an enormous size that he could encircle the entire world of men and hold his own tail in his mouth. This is why he is called Jormungandr, which means ‘earth necklace’ in old Norse.

The mouth with which Jormungandr grabbed his tail was full of sharp teeth dripping venom. His mouth was large enough to swallow a god or a giant whole.

Jormungandr was associated with the Ouroboros, a symbol of a serpent biting its own tail and forming an unending circle. While this symbol does not seem to have been particular common among the Vikings, it has appeared across cultures throughout time, being present in ancient Egypt and ancient India.

The Greek philosopher Plato refers to the Ouroboros as the first living creature in existence. In most cultures this serpent symbol represented the circle of life, that has no true beginning or end, with everything simply transforming into something new.

The most important role that Jormungand has to play in Norse mythology is as part of Ragnarok, the prophesied end of the world, but he also appears in two other stories from Norse mythology.

According to one story, during an unusual period of peace between the Aesir gods and the giants, Thor goes to visit the giant king Hymir in order to retrieve a large cauldron that will be needed for a mighty feast.

Hymir, aware of the stories of Thor’s appetite, slew three of his bulls in order to provide meat for the visit. But to his dismay, Thor ate two of the beasts in just one meal. Hymir then decides to go fishing, as he cannot spare any more of his cattle to feed the god of thunder.

Annoyed with Thor, Hymir enlists him to help, sending him to get the bait. He expects that Thor will hunt some small game to use, but instead Thor slays what remains of Hymir’s bulls and cuts off their heads to use as bait. While this enrages Hymir, the heads nevertheless prove excellent bate, and the giant king catches two whales that will surely be enough to feed the god.

According to Norse mythology, Thor did not help Hymir with the fishing, simply looking out over the sea. But when Hymir asks Thor to row them back to shore, Thor’s thoughts are revealed, as he decides to take the boat deeper in order to catch bigger fish.

This makes Hymir extremely nervous, as he knows that this is where Jormungdar dwells, and he knows the prophecy that Thor and Jormungandr will encounter during Ragnarok. He warns Thor against fishing in these waters, but the god pays no heed.

Eventually something mighty pulls on Thor’s line, almost unbalancing the god. Hymir knows immediately that this is Jormungandr, as what other creature would be able to challenge the god.

Despite Hymir’s warnings, Thor is undeterred and starts to pull the creature up, and readying his hammer to batter the beast. Terrified by this prospect, just as the serpent’s body is reaching the surface, Hymir cuts the fishing line, letting the monster sink back down into the depths.

Thor is so outraged with Hymir that he throws him overboard and leaves him there. He was probably eaten by Jormungandr for his efforts to save the world from an early end because of the arrogance of the god Thor.

The other story from Norse mythology that involved Jormungandr is also a story about Thor. In this story Thor encounters the giant king Utgarda-Loki and performs a number of deeds for him.

At some point, the giant king goads him into trying to lift a colossal cat in order to show off his prestigious strength. However, the cat is actually Jormungandr, disguised by magic. As a result, as hard as Thor tries, he can only lift the serpent-cat enough that one of its paws leaves the ground.

The giant later explains the ruse to Thor, and explains that it is in fact a good thing that he did not succeed in lifting the serpent-cat, as Jormungandr’s huge size meant that the feat may have altered the boundaries of the universe.

By far the most important role that Jormungandr has to play in Norse mythology is as part of Ragnarok, the prophesized battle at the end of the world in which the Aesir gods and giants will fight to the death, and cause the total destruction of the Norse cosmos.

It may be that Jormungandr himself triggers Ragnarok. According to Norse mythology, the apocalypse will be preceded by three years of relentless winter in Midgard, the world of men.

Jormungandr will become uncomfortable in the icy waters that surround Midgard, and make his way to the surface. His huge bulk means that this movement will cause powerful earthquakes across the nine worlds of the Norse Cosmos. This led to the saying that when Jormungandr releases his tail, Ragnarok will begin.

These earthquakes will allow his brother, the wolf Fenrir, to break the chains that hold him in Asgard. It will also allow his father Loki to escape his prison.

He has been chained to two rocks, with a venomous serpent dripping painful venom onto his skin, for his role in the death of Balder, a son of Odin and the most beloved of the Aesir gods.

Loki will lead an army into Asgard to fight the Aesir gods, and will fight to the death with the Aesir god Heimdall. Fenrir will devour Odin himself, before being slain by one of Odin’s sons.

In the final battle Jormungandr will find himself facing Thor one final time. Thor will fight harder than he has ever fought before and eventually pummel the Midgard Serpent to death with his hammer.

However, after his victory, Thor will be covered in so much of Jormungandr’s venom that he will only be able to walk nine steps before falling to his own death. Jormungandr will breathe so much of his poison into the air that he will poison all of the nine worlds of the Norse cosmos.

While Jormungandr is portrayed as an enemy of the Aesir gods in this story, it is hard to see him as the villain. Surely it is understandable that he would want revenge on the group of gods that treated his family so viciously.