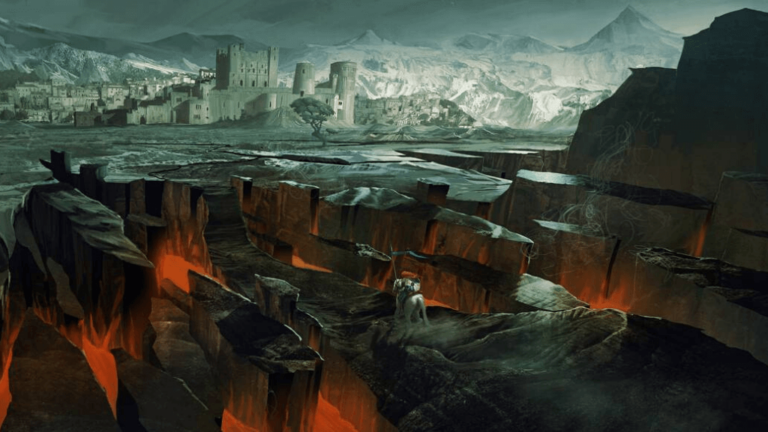 The Vikings called that the land in which they, human beings, dwelled Midgard (Middle Earth) or Mannaheim (Home of Man). They believed that it was one of the nine worlds that made up the cosmos of Norse mythology.

It was separated and protected from the rest of the cosmos by a great body of water in which dwelled Jormungandr, the Midgard Serpent, who would only emerge from his watery depths at the end of the world.

But how was Midgard constructed, where exactly does it sit in the Norse cosmos, and what will happen to it at the end of the world? Read on to find out.

The Creation of Midgard

According to Norse mythology, Odin, the king of the Norse gods, and his brothers Vili and Ve created Midgard from the body of the first giant Ymir. Ymir, an enormous celestial giant, was busy reproducing, with giants and other creatures sprouting from his legs and armpits.

The gods were extremely worried about these chaotic forces that Ymir was releasing into the universe, so they decided to kill him.

The trio then rolled his body into the center of the universe and used it to construct a new world. His flesh was used to make the land, and his blood the oceans. His bones were mountains, his teeth cliffs, and his hair trees. His brains were scattered over this new world to form clouds.

The gods also took Ymir’s skull and charged four dwarves with holding it above the world to create the sky. They were named Nordri, Sudri, Austri, and Vestri, giving the points of the compass their names. The sun, moon, and stars were made from scattered sparks that were caught in the skull.

After making the world, Odin and his brothers created mankind, breathing life into an ash tree and an elm tree to create man and women, Ask and Embla. They gave these beings all the things that they would need, but also saw that they would be helpless to protect themselves within the universe.

So, they fenced Midgard off from the rest of the universe using the eyebrows of Ymir. But they made sure that they would be able to access the world to protect it by connecting it to Asgard via the rainbow Bifrost bridge.

For men, Midgard is the only one of the Norse worlds that is fully visible. The other realms intersect with theirs and may be partially visible at times, but are largely invisible, and only known through oral traditions passed down across the generations.

The Location of Midgard

As the name suggests, Midgard was at the center of the Norse cosmos, kind of in the Goldie Locks spot.

The Vikings believed that all the nine worlds of Norse mythology were held within the roots and branches of Yggdrasil, the Tree of Life. Asgard, the realm of the gods, was up in the highest branches of the tree, while Helheim, the underworld, was down in the roots.

Midgard probably sat in the trunk of the tree, between the two. It is also described as being midway between Niflheim, the land of ice in the north, and Muspelheim, the land of fire in the south, so at the perfect place in the center of the universe.

It was surrounded by Jotunheim, the sparsely populated wilderness realm of the giants. It was the influence of the giants on mankind that the gods feared most, and this was the reason they created the protective fence around Midgard.

This greater landmass was then surrounded by a huge body of water, in which lived Jormungandr, the Midgard Serpent.

Jormungandr was one of the children of the trickster giant Loki with the giantess Angrboda, alongside the great wolf Fenrir, and the giantess queen of the underworld Hel.

The gods so feared the offspring of what they considered a monstrous union that they decided to place them in locations across the universe where they could do the least damage.

When Jormungandr was still young and relatively small, the gods of Asgard threw him into the ocean that surrounded Midgard. There the serpent grew to such a size that he could encircle the whole world and hold his own tail in his mouth. It is believed that he will stay in the water like that until the arrival of Ragnarok.

Ragnarok is a prophecy told by the Volva about how the gods themselves will die, taking most of the universe with them, including Midgard.

According to the prophecy, the world of men will see many omens of their coming doom. Three winters without summer will ravage the lands, and war will break out, turning brother against brother, father against son, and breaking the ties of kinship.

The sun and moon will then disappear, and the earth will shake so fiercely that the trees will be torn out of the soil and mountains will fall.

After all this, Jormungandr will finally emerge from the water, spewing his venom into the air and poisoning the land. His movement will cause massive tidal waves that will see the entire earth descend into the water.

Older versions of the Ragnarok prophecy end there. But in later recordings, which probably represent a Christian influence, Midgard will emerge from the water again to allow the cycle of creation to repeat itself.

What do you think? Will Midgard re-emerge from the ashes of Ragnarok, or is the end of the world the end?