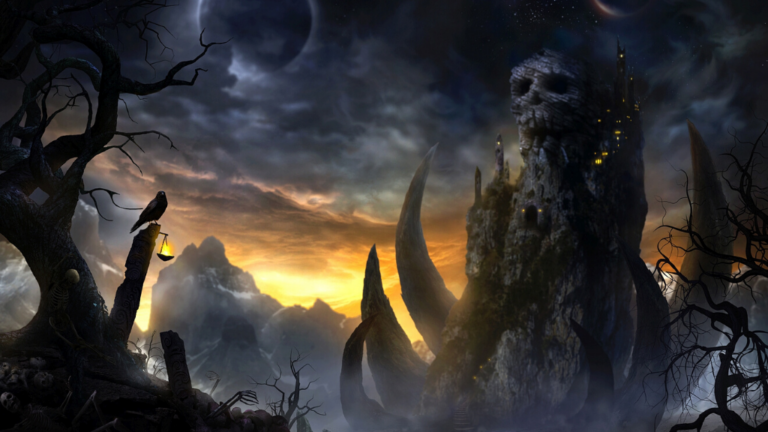 Helheim, which literally means “house of Hel” in Old Norse, was one of the nine worlds within the universe of Norse mythology. It was an underworld realm of the dead, where those who did not find themselves in Valhalla, the afterlife of brave warriors, were destined to spend eternity.

But despite the similarity in their names, Helheim should never be confused with the Christian Hell. It was a uniquely Viking world that reflected Viking values and beliefs. Read on to learn more.

Since Helheim means “the house of Hel”, the first important question to answer is “who is Hel?” She was the daughter of Loki with the giantess Angrboda. Her siblings were the great wolf Fenrir, and the Midgard Serpent, Jormungandr.

The Aesir gods so feared the offspring of what they considered a monstrous union that they decided to place each of the children somewhere in the cosmos that they could do the least damage.

Jormungandr was thrown into the sea that surrounds Midgard, the world of men. Fenrir was chained up on a deserted island using magical bonds made by the dwarves that could not be broken.

Hel is described in the sources as being half black and half flesh-colored, a description that is probably meant to indicate that she is half living and half dead. For this reason, the gods sent her to Niflheim, a primordial land of mist that was also a realm of the dead.

Inexplicably according to this story of fear of the children of Loki, she was also given jurisdiction there. For this reason, many referred to the realm as Helheim, the house of Hel.

So, Helheim was one of the realms of the afterlife in Norse mythology, but was not the only one.

The Vikings believed that those that died bravely in battle were taken to live in either Valhalla or Folkvangr, halls within Asgard where they would live in a warrior’s paradise until they were called on again to fight alongside the gods at the end of the world.

Vikings that drowned at sea might find themselves in Ran, an afterlife at the bottom of the sea ruled over by a sea giantess of the same name. The Vikings also talked about a place called Helgafjell, which seems to be a holy mountain where some of the dead would pass their days pretty much doing the same things that they did when they were alive.

But this doesn’t really seem to reflect earlier ideas, as in earlier accounts it is virtually impossible to tell the difference between Valhalla, Folkvangr, and Helheim, as they are rarely named. So it is most likely that Helheim was just one of several places where a Viking might find themselves after death.

The Road to Helheim

Helheim was one of the nine worlds that made up the Norse cosmos. All of these worlds were held together and connected by Yggdrasil, the Tree of Life. The Vikings said that the worlds were nestled in the tree’s roots and branches.

Helheim was probably located in the roots of Yggdrasil, as it is described as being downwards and northwards of, well, pretty much everywhere.

While what we know of Helheim itself is pretty sketchy (as we will see below), the road to Helheim, known as Helvegr, is described consistently in a variety of different sources.

According to the tale of the death of Balder, a son of Odin and one of the most beloved of the gods, Hermod made his way to Helheim in order to bargain with Hel for his spirit. He descends the trunk of Yggdrasil on Sleipnir, the special eight-legged horse of Odin (and another child of Loki), and then travels for nine nights through dark valleys until he reaches a river called Gjoll, which means loud noise.

He found a bridge traversing the river called Gjallarbrú (which means bridge over Gjoll – they were very imaginative with their names) where he encountered a giantess Modgudr, whose name means furious battle. She seems to have been some kind of gatekeeper, but she let Hermod pass on his business. The god then arrives at a fence, which has a gate, but it is protected by a fearsome guard dog known as Garm. Hermod jumps the fence in order to gain access to Helheim.

A similar description is given in the account of the journey of the hero Hadding to Helheim recorded by the Danish historian Saxo Grammaticus. He is led down into the realm of Helheim by a mysterious woman, who takes him through a dark and misty land, and then a sunny and fertile land where herbs grow year-round.

They eventually reach a raging torrent that is flowing with weapons, presumably the same Gjoll. They cross a bridge, and on the other side see armies of fallen warriors locked in eternal battle. They then come to the same wall, which is variously called Helgrindr, fence of Hel, Nagrindr, corpse fence, and Valgrindr, fence of the fallen.

We actually don’t know very much about what Helheim was like, as it is only described by Snorri Sturluson, a 13th century Christian author that is clearly heavily inspired by Christian ideas of Hell.

He recounts a dark and dreary hall, called Elvidner (misery), where the goddess of death eats from a dish called “hunger”, with a knife called “famine”, suggesting that no amount of eating can fill the empty stomachs of the dead. He also refers to a bed that is called “sick bed”, again suggesting that no amount of sleep can ease the weariness of the dead.

But considering what we know of Viking beliefs in the afterlife, and that Helheim was not just a place for the wicked, it is more likely that Helheim was a reflection of the mortal world, with people living in conditions quite similar to their normal day-to-day lives.

This is what we see with Valhalla, a place where warriors can pass their time doing the things that warriors love. We also see this with Ran, as a specific afterlife for the drowned. Both Valhalla and Ran suggest that the Viking afterlife reflected the way that the individual lived and died. This is why they were buried with the things that they would need for that life.

If Norse mythology did have an equivalent of the Christian Hell, it would have been a place within Helheim called Nastrond, where the dragon Nidhoggr chews on the corpses of the wicked.

Place of No Return

What Helheim does have in common with the Christian idea of Hell was that it was a place that was completely cut off from the rest of the cosmos, by the river Gjoll, and from which no one could return.

When Balder died, Odin sent Hermod to negotiate with Hel to return him to Asgard. It seems that she had the power to let someone pass out of Helheim, though there is no record of her ever exercising that power. But it is surprising that even Odin himself, as king of the gods, creator of the universe, and a death deity through his connection with Valhalla, had no power to free his beloved son from Helheim.

But the dead are destined to leave Helheim one day. According to the prophecy of Ragnarok, the Norse end of the world, Loki will lead an army of the dead to fight against the Asgardian gods. They will exit from Helheim on a ship made from the fingernails and toenails of the dead, with Hel at the head of the ship alongside her father.

What do you think? Was Helheim really a dark place of torture and misery, or was it an afterlife that largely reflected the day-to-day life in the mortal world, but lacking that spark of joy that only comes with living.