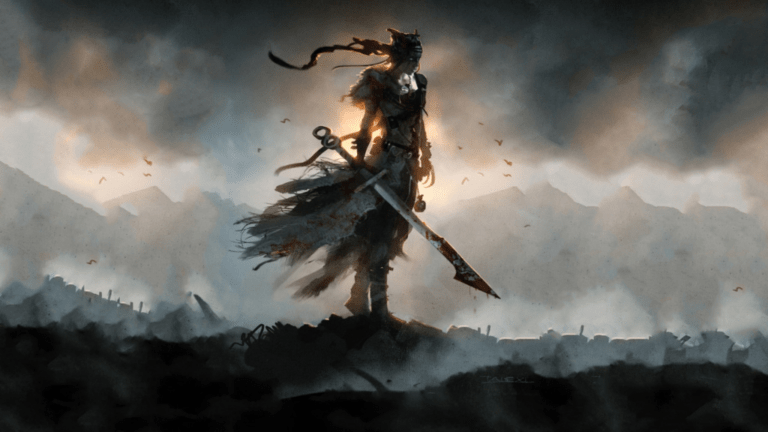 Hel, goddess of death, could there be a more fearsome being in the world of Norse mythology?

But don’t be taken-in by the portrayal of the Norse goddess of death in the Marvel universe. While the Norse goddess was the ruler of the underworld, she was never represented as pure evil. Hel was a more complex character in Norse mythology.

Read on to discover more about the real Norse goddess of the death and the role that she will play in Ragnarök.

Hel, the goddess of death, was in fact a giantess, a child of Loki, the giant trickster that lived among the Aesir gods, and Angrboda, a fearsome giantess.

This made Hel the sister of the monsters Fenrir, the mighty Norse wolf, and Jormungandr, the Midgard Serpent.

The Aesir gods feared these three children due to their monstrous parentage, and prophecies of the chaos that they would wreak on the Norse cosmos.

In order to contain the problem, Odin sent each of the children to the place where they could do the least harm. In the case of Hel, he sent her to Niflheim, one of the Norse lands of the dead, and gave her jurisdiction over the realm.

As the goddess of the underworld, she had responsibility for hosting the souls that found themselves there.

The small serpent Jormungandr was thrown into the waters surrounding Midgard, where he grew to such a great size that he could encircle the entire world and hold his own tail in his mouth. Fenrir was tricked into be chained up on a deserted island by magical ribbon made by the dwarves.

The goddess of death is described in the sources as half black and half flesh-coloured, which some scholars has interpreted as her being half living being and half corpse. Hel is also said to have had a downcast and fearsome look.

Her name, which means “hidden” in Old Norse, is probably a reference to the fact that the underworld was hidden from the realm of the living.

Hel ruled over the realm of Niflheim, also often called Helheim in reference to the goddess of the underworld.

This was the place where the Norse dead that did not die on the battlefield found themselves. Warriors that died in battle were taken either to Valhalla, the hall of Odin, or Folkvangr, the hall of Frigg.

All other dead would find themselves in Helheim, under the jurisdiction of the goddess of the underworld, who would decide their fate. So, unlike the Christian concept of Hell, it was not a place of torment for the wicked and cruel.

The 13th century Icelandic historian Snorri Sturluson described the realm of the goddess of death in terms that resemble Christian ideas of Hell.

He describes halls where the goddess of death eats from a dish called “hunger”, with a knife called “famine”, suggesting that no amount of eating can fill the empty stomachs of the dead.

He also refers to a bed that is called “sick bed”, again suggesting that no amount of sleep can ease the weariness of the dead. But Snorri was writing in Christian times and was highly influenced by Christian ideas.

Earlier sources describe Helheim as located beneath one of the three roots of Yggdrasil, the world tree, with the other two roots leading to Jotunheim, the realm of the giants, and Midgard, the world of men.

The goddess of the underworld guarded the realm of the dead, and the goddess of death is described in some stories as appearing to those destined to die, telling them that they would soon join her in her realm.

Hel, Goddess of the Underworld and the Death of Balder

In all the stories from Norse mythology, the goddess of death plays her most important role in the death of Balder.

When Balder, beloved son of Odin and Frigg, is slain in a game, thanks to the machinations of Loki, Balder finds himself in Helheim.

Devastated by the loss, Odin and Frigg send Hermod, another of the Aesir gods, to Helheim in order to ask Hel, as goddess of the underworld, to allow Balder to return to the world of the living.

Hermod pleads with Hel, explaining that Balder is the most beloved being in the Norse cosmos, and therefore should be returned.

The goddess of death actually agrees to return Balder, but only on the condition that every single thing in the Norse cosmos weeps for him, as proof of this universal love.

The Aesir gods successfully ask all things to weep for Balder. Only one giantess, thought to be Loki in disguise, refuses to weep. Therefore, the goddess of death kept her prize.

Balder stayed in Helheim as a companion of Hel until Ragnarök, when the chaos that spread across all the worlds of Norse mythology allowed him to return to Asgard and fight alongside the other Aesir gods.

As is apparent from the above discussion, Marvel took a lot of liberties in their portrayal of the goddess of the underworld in order to create their Ragnarök story.

In the first instance, Marvel’s Hel is the daughter of Odin, rather than Loki. Marvel also suggests that Odin cast Hel out and made her the goddess of the underworld due to fear of her ambition as they conquered the universe together.

But in the original Norse myths, Odin sent Hel to the underworld due to fear of her parentage and prophecies of the role that she would play in future destruction.

According to the prophecy, Loki will break his own chains (he was imprisoned for his role in the death of Balder) and will sail on a ship made from the fingernails and toenails of the dead to Asgard. He will be accompanied on board by his daughter Hel, and an army of the dishonourable dead. Her final fate in the battle is not recorded.

Does Hel’s participation in the final battle against the Aesir gods represent a bloodthirsty character determined to bring death to the Norse cosmos in order to bring everyone under her sway? Or is she a woman participating in a battle to get vengeance for the way that Aesir gods treated her and her family, banishing them to the corners of the universe out of fear and prejudice?