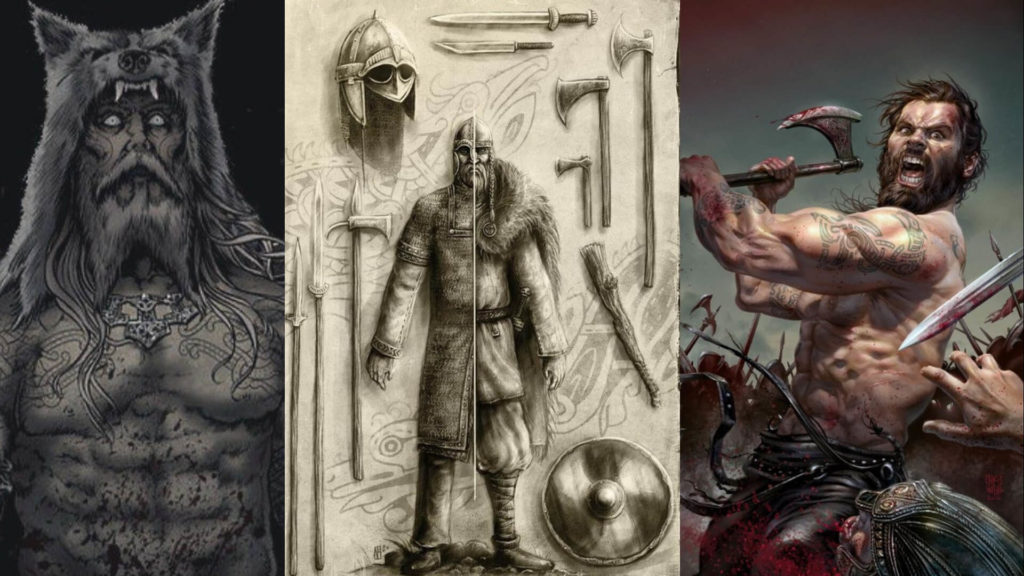 When you think of the Vikings, the first thing that comes to mind is the Viking Warrior, tall, powerful, bearded with a horned helmet and armed with an axe. These fearless warriors invaded the European continents from the 8th to the 11th century.

Already, to be clear, Viking warriors have never resembled this modern stereotype, there was a special way to become a viking warrior  : 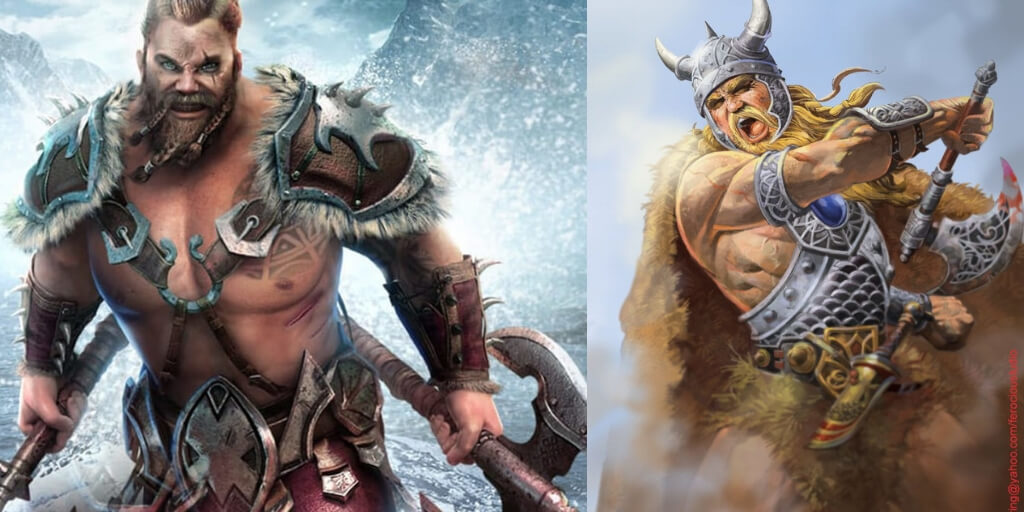 The vast majority were farmers, hunters and other working classes. There were of course career “soldiers”, but they were not the majority.

We will see that the armor adorned with bone and skull, full helmets and double-edged axes were not what was actually used…sorry for the folklore…

1. How were the Viking warriors dressed?

It is very rare to find clothing from the Viking age: Some pieces of cloth preserved in the graves of members of the upper Viking social classes have been discovered but this remains almost anecdotal.

For this reason, it was necessary to supplement the research with other sources in order to reconstruct their clothing. Thus, archaeologists and historians have been inspired by Gotland’s stella,  multiple Oseberg tapestries in particular, literary works and other representations of this period. 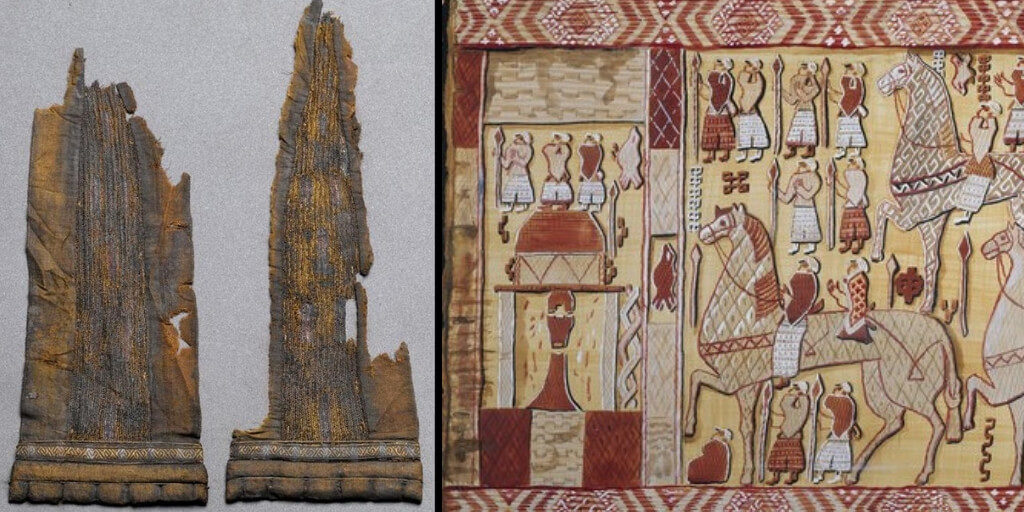 An object has been found in graves many and many times, it is the Thor’s hammer. This norse jewelry represents a singular hammer with a short handle.

These people from what we now call Denmark, Norway and Sweden, lived in what we can call very cold climates! (Ok, we live in the south of France and for us everything is cold… but still!!)

Their clothes were of course adapted to this temperature and the Vikings wore multiple layers of clothing to protect themselves from it. This is especially true for Viking warriors who have to sail for long periods of time in the open sea. 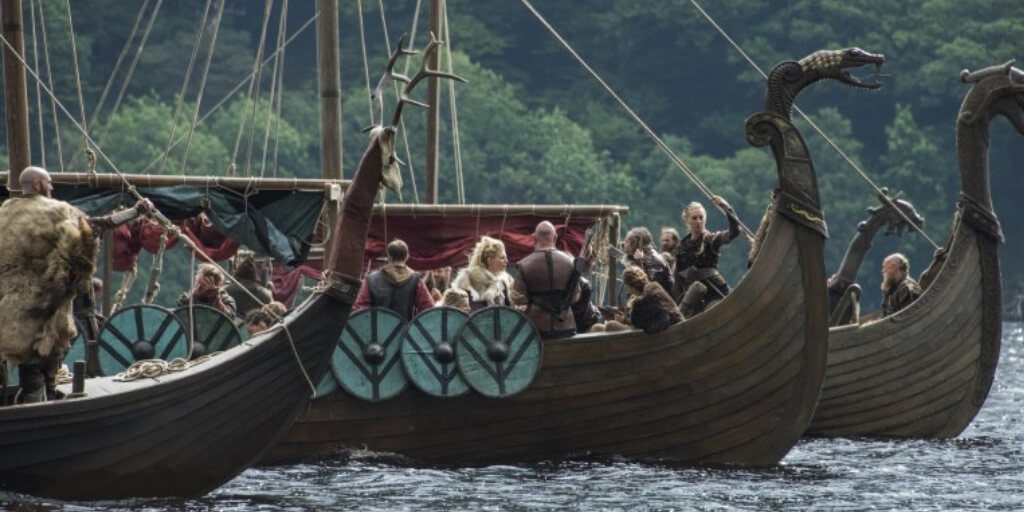 As we have seen, they did not have large helmets with horns and other leather and flat armour… Viking warriors wore lambda peasant clothing, sometimes with a round shield and for the richest among them a guyed helmet with a chainmail.

Clothing, trousers and tunics were made from locally available materials, such as wool and linen (It is interesting to note, however, that for the richest personalities, certain materials such as silk and gold thread were imported from far away to display their distinctive social status.)

One of the essential elements of their outfit was the capes and coats! Because yes, to protect themselves from the cold during long sea voyages, they had to be equipped. Imagine yourself in a boat, for several weeks, certainly wet… Life the hard way of life…

So to reduce the suffering a little bit, coats and capes were the best allies :

Of course, ease of movement being the priority in combat, they quickly got rid of this useless surplus to cut heads…

Well, that’s just it! To cut off a head, you need a sword or an axe? Let’s talk about the Viking warrior’s combat equipment. While it is true that Vikings liked axes (mainly because it was an object used in everyday life and therefore all Vikings had them), they largely preferred spears.

The spear was therefore the weapon most used by Viking warriors, contrary to what one might have thought, through the various modern representations of the Viking warrior par excellence.

As for swords, they were very rarely used in combat, but when they were, they preferred a sword to a rounded one-handed sword, designed to cut and not plant.

The most famous and mysterious sword is undoubtedly the “Ulfberht” sword. Its name comes from the inscription +VLFBERHT+ engraved on the blade. It is the most represented sword in films and books on the Viking theme. It is however a very rare sword, less than 200 authentic units have been discovered so far. 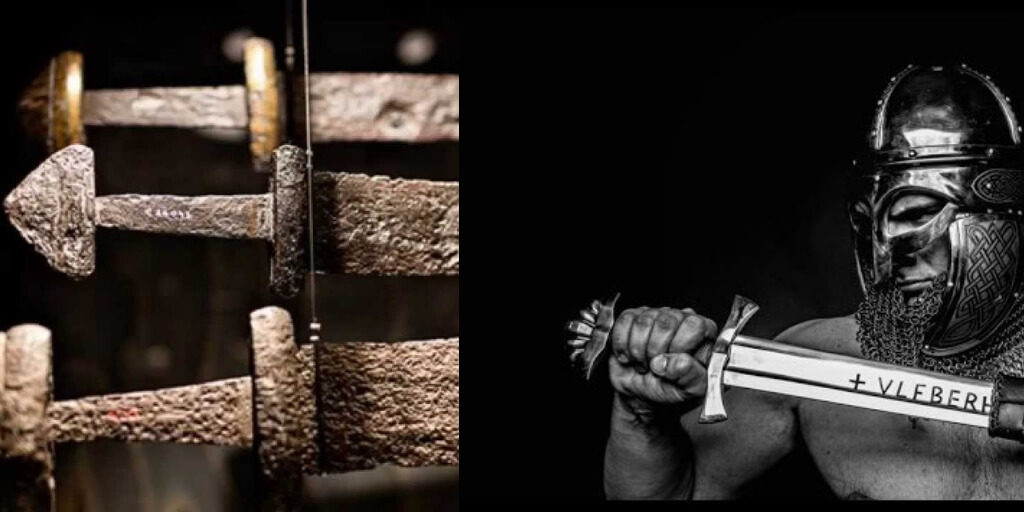 The particularity of this sword is the metal in which it was made, which is made of Damas steel. This type of steel has long since disappeared today, but what is surprising is the origin of this metal so far from the northern lands. This raises the point of the very extensive trade that the Vikings practiced, but that is not the point….

It must be understood that the Viking invasion lasted 3 centuries… so the outfits and equipment have evolved over time. The main characteristic that warriors seek for their clothing was freedom of movement, for this it is imperative to get rid of unnecessary protection and suffocating clothing.

They favoured loose-fitting clothing and the bare minimum as protection. Leg protectors thus lost more and more popularity from the 8th century onwards.

Most of the armour was made of steel, as it was customary to make them in Europe at that time.

Nordic mythology, Icelandic sagas and also historical sources report the existence of extraordinary warriors within the Scandinavian army of the Viking age. Among these vikings were the most famous vikings in history.

When people talk to me about wild warriors, the first thing that comes to mind is a bloodthirsty barbarian dressed in animal skin.

These warriors called Berserker and Ulfhednar were organized in fraternity and reportedly worshipped Odin. Described as elite warriors in the king’s service, under the aegis of the god Odin, they were admired. But their uncontrolled behaviour causing harm to their own clan also devotes fear and contempt to them.

As for the origin of these names, etymology shows the correlation with animal skins. Ulfhednar for “wolf pelisse” and Berserker for “bear pelt” from the old Norse, but also “bare chest” “unprotected” from the Norwegian. 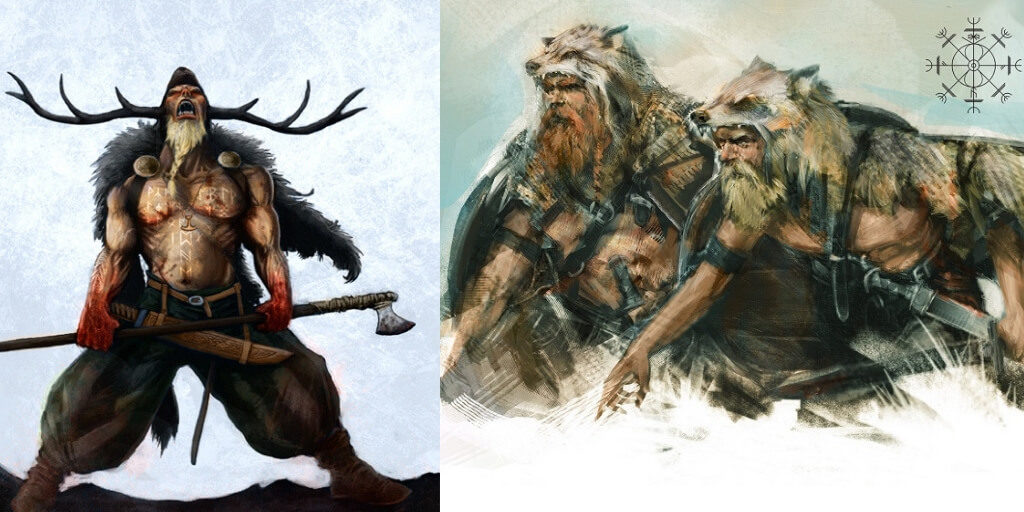 For some researchers, there is no doubt that the origin of these warriors’ names is directly linked to an ancient name of the bear. This refers to their clothing but also to their ability to put themselves in the animal’s skin by their shape and behaviour during the fight.

It is therefore the animality that characterizes the “berseker” bear warriors and the “ulfhednar” wolf warriors also called “wild-beast warriors” which are nowadays very often represented by amulets in the shape of the head or leg of these animals.

From a historical point of view, researchers such as Georges Dumézil argue that the “wild-beast warriors” phenomenon is undeniable and dates back to the 5th and 7th centuries.

In addition to their impressive clothing, these warriors were characterized by the rage in which they entered combat. This fury was called Berserksgangr, meaning “the berserkr march”.

It can be presented by :

There are several theories that have been put forward throughout history to try to explain this extraordinary behaviour.

We thus gather the idea of the shamanic trance, mental illness or even genetic defect. Massive consumption of alcohol and mushrooms are also being considered.

The Jomsvikings (Jomsborg Vikings) were an elite corps of mercenaries from the 9th to the 11th century. These warriors were known for their bravery in battle, attached to a bastion, they formed an intrepid warrior fraternity, dedicated to the cults of Odin and Thor.

This legendary fraternity is surrounded by mysteries.

Indeed, the place of the Jomsborg fortress, whose name they shared, has never been identified with certainty. However, archaeological discoveries allow us to verify what the Icelandic sagas of the 12th and 13th centuries tell us about them. 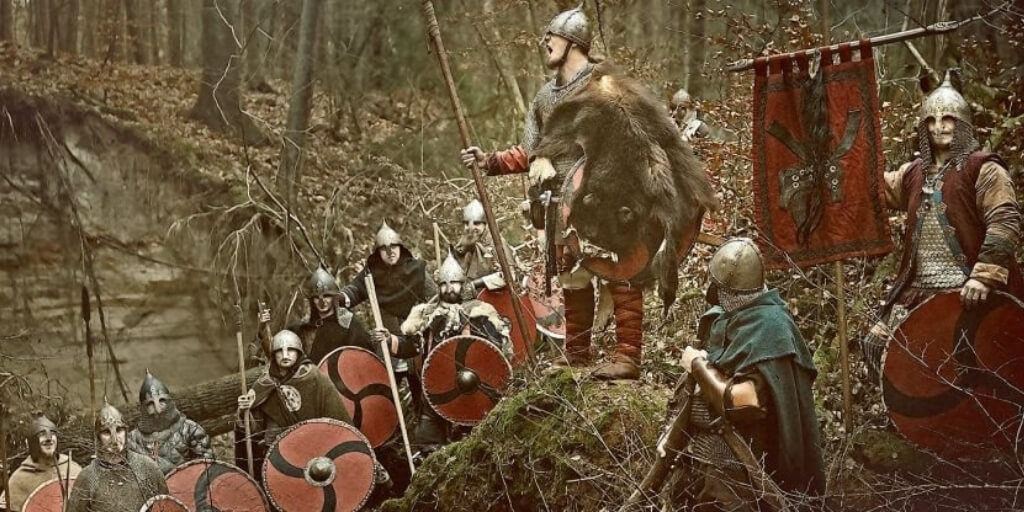 The Jomsvikings practiced a strict code of conduct. Violation of any of these rules could result in immediate and unequivocal expulsion from the order.

All these rules tended eminently to unite the troupe into an authentic fraternity.

The Varangian guard, “Varègue guard”, was an elite corps of the Byzantine army, from the 10th to the 14th centuries, initially composed of Scandinavian mercenaries.

The Varègues were the personal guardians of the Byzantine emperor to whom they took an oath of loyalty.

The loyalty of the Varègues became legendary among Byzantine authors. In the Saga of St. Olaf, a Varega chief thus addresses the emperor :

“Even if there were fire in front of me, I and my men would gladly throw ourselves into it if I had the impression, O king, that I could thus gain your good pleasure”.

The guard performed certain police functions to enforce laws or arrest the emperor’s political opponents.
It was also used in many battles, as a backup in the most critical moments, or when a conflict reached its peak. 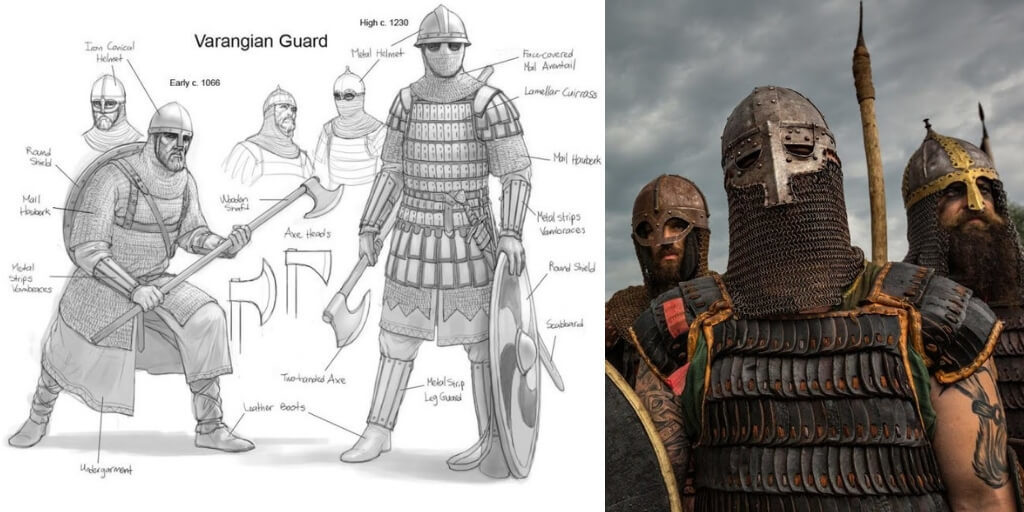 Byzantine chroniclers of the time indicate that the Varègues were particularly frightening, both in their appearance because of their large size, and in their equipment – including the emblematic axe measuring, on the model of the Danish axe, 1.40m long with a blade width of 17cm – and that they attacked with rage without worrying about their blood or injuries.

Thanks to their Viking heritage, the Varègues were also appreciated for their maritime skills. Thus, in addition to battlefield operations and palace functions, some of the younger or less experienced members of the Guard were chosen to hunt down pirates.

I hope you enjoyed this article and that it was useful to you!