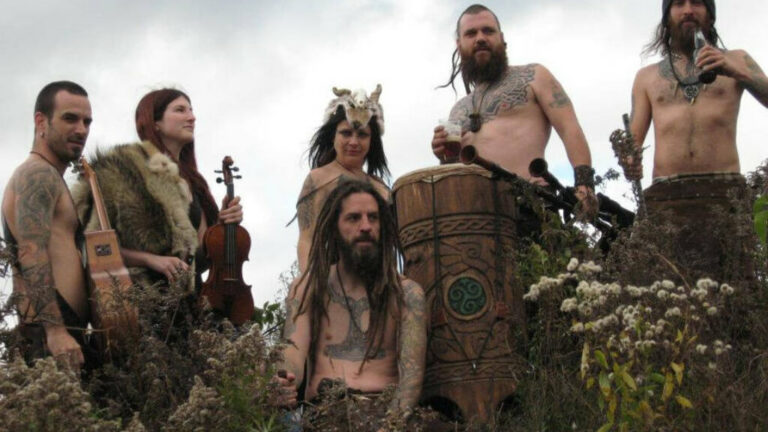 As well as being warriors that terrified and raided their neighbors, the Vikings had a rich culture with elaborate religious beliefs, sophisticated literature, stunning art, and, of course, traditional music.

Our knowledge of Viking age music, like our knowledge of the traditional music of many cultures, is limited. We do not really have any idea what it sounded like. We do, however, have an idea of what kinds of instruments the Vikings played from a limited number of Viking instruments that survive in the archaeological record.

So, what musical instruments did the Vikings play?

Viking flutes probably most closely resemble modern-day recorders, as they were slender cylindrical instruments with a series of holes that the player could cover or leave open in order to produce different notes when blowing into the instrument’s mouthpiece. Most surviving flutes have just three holes, but examples with up to seven holes have been found.

These Viking instruments were mostly carved from animal bones, usually the leg bones of cows or deer, but examples using the bones of large birds also survive. Similar flutes were probably also made from wood, for example hollowing out the branch of an elder tree.

Numerous variations of flute-like instruments were probably used by the Vikings, including simple whistles that may have been given to children, to more elaborate wind instruments. One such example is an instrument known as Skalmejen that was found in excavations of a shipyard on the Fibrødre River near Flaster in Denmark.

This 11th-century flute-like instrument has quite a bit of mystery about it as no one really knows how it was used. It has been suggested that it was part of a bagpipe-like instrument, but it was not found alongside other pipes or the organic remains of a bag. Others have suggested that with the addition of a mouthpiece it could have been played as a kind of oboe.

Similar to the Viking flute was the Cow of Goat Horn. Made from the horn of a cow or a goat, these too had four or five holes bored into the horn that players could cover or leave open in order to produce different notes.

A well-preserved example of a four-hole cow horn survives from Västerby in Sweden with a mouthpiece at the small tip of the horn. A slightly larger horn 27 centimeters long and with five finger holes was found in Konterud in Värmland.

While in films we are accustomed to seeing simple versions of these horns, without the note holes, being used to sound the alarm or call men into battle, no archaeological evidence for these horns survive. Nevertheless, it is likely that these did exist among the Vikings as according to the Vatnsdaela Saga horns were used to call men into battle.

Vikings are also depicted using these types of horns on the Bayeux tapestry, an English tapestry dating from shortly after the battle of Hastings in 1066.

At the excavations at Coppersgate in York, England, archaeologists recovered a Viking pan flute dating from the 10th century. From this single find it has been speculated that this was another instrument commonly used by the Vikings.

The York panpipe has five pipes, and as our only surviving example, we can not be certain if variations existed. However, considering the significant variation that existed when it came to flutes and horns, it is likely that pan flutes were also not uniform.

Probably one of the most commonly mentioned instruments in the Norse sagas (see below) was the Viking lyre, which resembled a small, handheld harp. Described in the sagas as an instrument of the Viking elite, lyres were made from wood, were generally oblong in shape, and had six strings made from sheep guts. There is also evidence for lyres for five or seven strings.

Viking lyres probably closely resembled the Anglo-Saxon lyre found at the famous ship burial at Sutton Hoo which dates from the 7th century, and the lyre discovered in 2002 at Trossingen in Germany dating from the 6th century. Fragments of 18 lyres have been found throughout Scandinavia and its colonies.

In depictions of people playing the lyre from across medieval Europe, it seems that it was usually held upright resting on one leg with one hand behind the instrument with the fingers spread against the strings. The other hand would strum the strings of the instrument, either with a plectrum, or by strumming with the back of the hand, using the fingernails to strike the notes. The hand at the back of the instrument would have been able block certain strings while strumming in order to prevent them from producing sound or change their note.

A bow for playing stringed instruments was invented in the Middle East and made its way to Europe where it was widely adopted, including by the Vikings.

It seems that the bow was applied to the Viking lyre to create what was known in Scandinavia as a Talharpa. The lyre evolved to have only four strings in order to be played with the bow, that was strung with horsehair.

Similar horsehair bows were also used to play a violin-like instrument, which the Vikings probably discovered through their contact with the Byzantine empire. Known as a Rebec, an example was discovered in an excavation of the Viking town of Hebedy.

A lur was a trumpet-like instrument made from either wood or bronze that came in a variety of different lengths. Several have been discovered in Viking longboats, and their function was probably more practical than musical. One of the Icelandic sagas describes a lur being used to marshal troops and frighten the enemy. They may also have been used by farmers to call their livestock. They were also probably used as part of religious rituals.

Wooden lurs were generally made from one piece of wood split lengthwise, with the interior hollowed out and the two halves tightly bound together with willow bands. Lurs found at Herning and Holing in Denmark range from between 78 and 79.5 cm long, while the Lur found at Oseberg ship-burial was 106.5 cm long. The Oseberg example is particularly fine and was found in an oak box richly decorated with iron ornaments, suggesting that it was a tool of some prestige.

Cast bronze lurs were bit more elaborate, and could be either straight or curved. With a mouthpiece at one end, bronze lurs often had a decorative ornamental plate at the other end with somewhere between six and ten round depressions.

Six bronze lurs were found in the Brudevaelte Mose bog in northern Zealand, presumably deliberately deposited there as the mouthpieces were discovered gathered in a bunch and tied together with a woven band. This suggests that the objects were deposited there for religious purposes. Swedish rock carvings from the Bronze Age also show men playing lurs participating in religious rites.

The Vikings are also thought to have used drums, as both musical rhythm instruments, and for religious and practical purposes.

Little evidence for Viking drums survives, but they probably resembled the Bodhran Celtic hand drum and the skin-headed drums used by the Sami people of northern Scandinavia. These were made with a shallow round or oval wooden frame supported by one or two crossbars inside that looked a bit like wheel spokes. A rawhide head was then stretched taught over the frame.

Players would grip the crossbars from underneath, but they could also touch the hide from underneath for tuning or dampening purposes. The head was played either with a bare hand or a striker. The size of drums was limited by what a person could hold and play in this way.

A variety of other instruments would have been part of Viking age music. Vikings certainly used their voices, and likely stomped their feet and clapped their hands to create rhythm. A wide variety of bells and whistles also survive from Viking archaeology. These were used to keep evil spirits away from children as they slept, but were also probably used as musical instruments.

An elaborate musical rattle survives from Stövernhaugen in Norway that consists of three iron rings threaded on a large oval ring, and attached to the top of a stave 170 centimeters long. The stave would have been tapped against the floor to produce a drumming noise and causing the iron rings to crash together to produce a rattling sound.

That musical instruments were relatively common among the Vikings is also suggested by various references to Viking instruments in the Nordic sagas.

Mastering music and verse was clearly considered a sign of accomplishment among the elite of the Vikings. In the Orkneyinga Saga, Rognvald Kali Kolsson claims to have mastered both, and King Harald Hardrada claimed to have mastered the harp and poetry in the Morkinskinna Saga.

According to heroic poems Atlakvida and Atlamal, when the hero Gunnar was thrown into a snake-pit he tried to calm them by playing his harp – which he happened to have with him – but to no avail. This may have been because he played the harp with his toes, presumably because his hands were bound. This same event is depicted in a stave church portal from Hylestad that was carved in the early 13th century.

How did Viking Age Music Sound?

Viking age music may not have been to everyone’s taste. The Arabic traveler Ibrahim Ibn Ahmad Al-Tartushi, who recorded his experiences in the Danish town of Hedeby said, that: “Never before I have heard uglier songs than those of the Vikings in Slesvig. The growling sound coming from their throats reminds me of dogs howling, only more untamed.”

Decide for yourself. Some Nordic music notations survive on the last page of the 14th-century Danish Scanian Lawbook. The notations are notable not only as a rare example of Nordic traditional music notation, but because the lyrics were written in runes, when from about the 12th century everything written in ink was written using the Roman alphabet.

The opening lyrics of the song read: “Drømde mik en drøm I nat”, which roughly translates to ‘I dreamt a dream last night’. Several interpretations of how the notes should be played can be found.