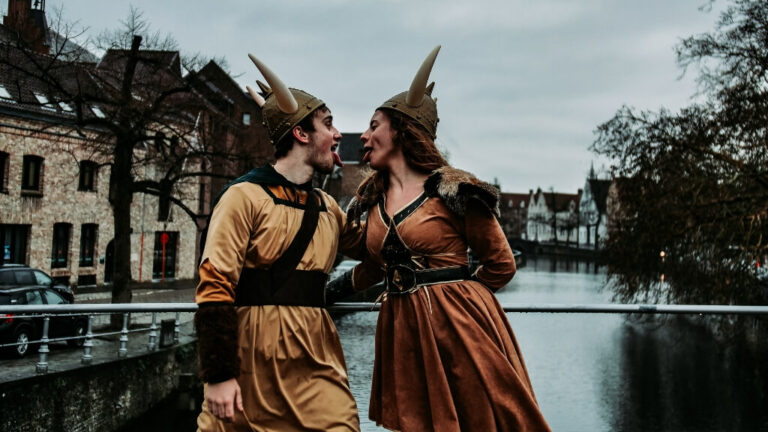 If we believe popular culture, the Vikings were very fashionable people! But when we take away the glamour added for the television cameras, what do we really know about Viking clothes? Farmers and warriors living in some of Europe’s colder climates, Viking clothes were comfortable, warm and functional. But that doesn’t mean that they didn’t have an eye for style.

Let’s take a look at what the historical clothing that the Vikings actually wore.

How do we know?

Before jumping into the matter of Viking clothes, let’s consider how we know what we know about Viking clothing.

Unfortunately, fabrics decay easily, and only survive in specific environments, like the dry Egyptian dessert or a peat bog. This means that only fragments of the materials that the Vikings wore survive today. Consequently, insights into Viking clothes relies heavily on what is written in the abundant surviving Viking sagas. This does mean that our knowledge is not as detailed as it could be, and that we know more about what the wealthy wore than the lower classes.

It does seem that Viking clothing choices were very similar across the Germanic people in Northern Europe, so looking at the historical clothing of other peoples in the area also provides some insight.

Our knowledge of Viking jewelry is much stronger since it has survived much better over the ages. In some cases, traces of fabrics have imprinted on the backs of belt buckles and brooches, corroding a pattern into the metal. This provides interesting information about things such as weave and thread count of Viking clothes.

The clothes of a typical Viking man consisted of trousers, shirt and an over tunic. They layered their clothes as a strategy to protect against cold. Most Viking clothing was made from linen made from flax, or wool.

Undershirts were usually made from linen, which was more comfortable against the skin than wool. A surviving example from Viborg was made with two layers of linen. It has a square neck opening with a flap that is secured with cords and fabric and loops.

The over tunic, called a kyrtill, was usually made from wool and could have long or short sleeves, probably depending on the weather. Tunics fell down to the knees and were put on overhead and did not have fastenings. They might feature a small split to expand the neck opening, which was usually closed simply, for example with a bead and thread. This was the most prominent clothes that a man would wear, and was usually died to be colorful, and may have been decorated. Some material fragments show signs of decoration, but not enough to allow for reconstructions. Modern reconstructions with decoration rely on Viking art.

Trousers were made from either linen or wool. They were generally secured with a simple drawstring waistband. Like tunic sleeves, trousers also varied in length. If a man wore shorter trousers, they would also use hose to cover the rest of their legs. These were made from two long pieces of cloth, usually wool, that were wrapped around the leg from knee to ankle.

The Vikings also commonly wore belts, usually made of bronze. Rather than using these to secure heir trousers, Vikings wore their belts over their tunics, and used them to secure knives, other tools and small pouches. Belts were made from leather and usually relatively thin, only about 2 centimeters wide. Warriors would also sometimes wear another leather strap over one shoulder to secure larger weapons such as a sword.

When temperatures fell, men would also wear heavy woolen cloaks for additional warmth. A simple rectangular design, it was often brightly colored and with striking fabric design. It was fastened at the right shoulder with ties or a penannular brooch. This style allowed the Viking to conceal what he was carrying, but keep his right arm free to handle weapons or tools.

Wealthier Vikings would have worn slightly more elaborate clothes, and they were heavily influenced by the style of the Byzantine courts, which the Vikings raided over the centuries. For the wealthy, silk was one of the most sought-after luxury materials. For example, the Mammen prince, a famous burial surviving from Jutland, suggests that his cloak was embellished with silk details displaying gold and silver thread and lined with marmot fur.

Wealthier Viking warriors may also have worn chain mail when they went into battle. Viking chainmail was expensive to produce as it required thousands of interlinked iron rings to be riveted together individually by hand. Nevertheless, some wealthy Vikings had chainmail shirts, which were probably long sleeved and extended below the knee. This would have been worn over the top of a padded leather tunic, which more humble Viking warriors often wore to offer some protection against edged weapons.

The Vikings also often used caps made of wool, sheepskin or leather, typically made in the Phrygian style with triangular pieces of fabric sewn together. Some had ear flaps for extra warmth. According to the Grágás, a medieval Icelandic lawbook, there were severe penalties for pulling the cap off another man’s head. If the hat had no chin strap, the penalty was a fine If the hat had a chin strap and was pulled forward, the perpetrator could be banished. If the hat had a chinstrap and was pulled backward off another man’s head, the victim had the right to kill their assailant in retaliation.

For those who could afford it, Viking warriors would wear an iron helmet into battle. These usually had a simple bowl-shaped design and nose guard protruding from the center. More expensive helmets also had a guard around the eyes that formed a sort of mask. Contrary to popular belief, they did not have horns. This would have added no additional protection, and would give opponents something extra to grab during battle. If horned helmets existed, they were probably used for ceremonial purposes only.

While the very poor probably did not use underwear, the sagas suggest that wealthier Vikings also wore underwear, though no examples survive. But in the Fljótsdaela saga one hero is described leading his tent at night wearing only his tunic and underpants. In another saga Gisli is described walking at night in nothing but his shirt and linen underpants.

Viking shoes were made from goatskin or calfskin, and according to shoes surviving from a Viking settlement in York, they could vary greatly in style. Viking boots were rarely higher than ankle length, and were often closed with stitching on the inside, which probably made the shoes more durable. Some evidence survives of heeled Viking boots, but these were probably worn by merchants and the wealthy, rather than your average Viking. Shoes were secured with either laces that wrapped around the ankles or buttons. Men and women’s shoes appear to have been very similar.

The clothes of a typical Viking woman consisted of a long chemise made of linen, and a shorter woolen strap apron overdress, sometimes called a hangerock.

A Viking woman’s overdress extended from shoulder to halfway down the calf and was suspended from two straps fastened at the front by means of two brooches, usually made from bronze. In the 9th and 10th centuries these brooches were normally oval shaped, but were gradually replaced with disk-shaped brooches in the 10th century. They often wore a third broach to fasten their cloak. There is some evidence that, at least wealthier women, wore tunics that were longer at the back than the front, and may have trailed on the ground behind them.

Women’s cloaks were similar to men’s cloaks, and they also wore belts in order to carry tools and small bags. Women’s belts appear to have been made from woven fabric rather than leather. As well as hanging things from their belts, Viking women would have hung smaller items from their brooches.

It seems that women also wore a knotted kerchief as a head covering, probably for warmth, and maybe to keep hair out of food, since women did most of the food preparation. It is not clear whether this was for everyday use or just special occasions, as some of the sagas mention elaborate headdresses.

Little evidence survives about the clothes of Viking children, but they probably wore very similar clothes to Viking adults. The Flijótsdaela saga describes the clothes of Helgi and Grimr, young boys of 12 and 10 years respectively. They are said to have had plain tunics made of rough homespun wool, as well as trousers and cloaks.

How the Viking made their Clothes

Viking clothes were mostly made from linen made from flax or from wool.

To make woolen clothes, the Vikings would first shear their sheep by hand, tearing the wool from the sheep in a painless process. The wool was then cleaned and combed into long fibers that would be spun into yarn. This was done using a wooden staff called a distaff, which they would spin with one hand, spooling the wool fibers into yarn.

The woolen yarn was then woven into material using a vertical loom. The resulting fabrics, which were a shade of white, were then died using plant dies. Common colors included black, yellow, blue, purple, brown and red. Red was the most expensive color as it was made from madder root, which did not grow in Scandinavia and had to be imported. Unfortunately, colors tended to fade quickly.

When it came to making smaller pieces of clothing, like socks or hats, the Vikings would not knit their wool yarn, but rather use a technique called needle binding which basically involved using large needs to tie the yarn in knots. This results in an extremely strong fabric.

To prepare animals skins, like used for shoes, animal skins were treated with beeswax to make then soft, and then rubbed with fish oil to make them waterproof.

Brooches have been mentioned several times as a way of keeping Viking clothes in place. These were both functional, but also fashionable, as a way of adding individuality to an outfit. They were usually elaborately decorated. The most common Viking brooches are sometimes called turtle brooches as they were shaped similar to a turtle shell. The Vikings also often used tri-lobed brooches, allowing for three pieces of fabric to be brought together.

Viking men and women also wore arm rings, neck rings and finger rings as ornamentation. There is no evidence that the Vikings ever wore earrings, though they would have known about them from their contact with other peoples in Europe. Viking jewelry was made from gold or silver and could also be used as bullion when the need arose. Pieces could be cut off a piece of jewelry and exchanged for goods and services. This is why the dead were often buried with their jewelry, as it was believed that they would need currency to live comfortably in the afterlife.

Both men and women also wore necklaces made from beads. Average Vikings used beads made from amber or glass, while the wealthy could use imported gemstones or crystals. Necklaces were worn around the neck, but women would sometimes also suspend them between the brooches that they used to fasten their dresses.

Jewelry was also often adorned with pendants bearing significant symbols, such as Thor’s hammer or a wolf. These were probably amulets designed to honor the gods, and call their protection in times of need. Other common jewelry designs were geometric shapes or plaited bands.