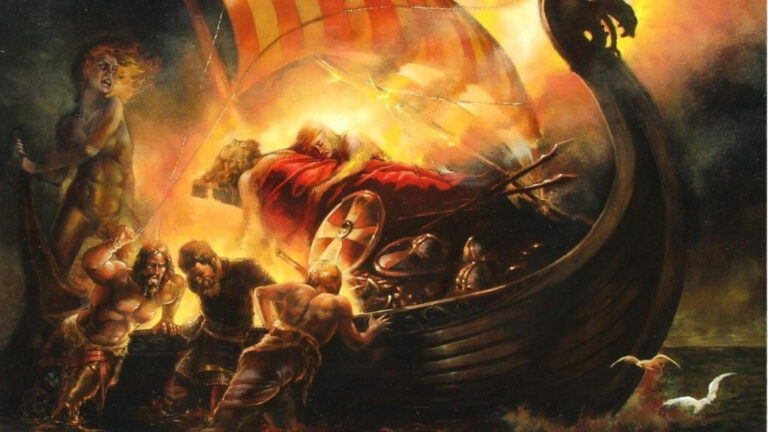 Death was an essential part of life for the Vikings. A warrior people, death on the battlefield was common and considered an honorable and even desirable end.

Living before the epoch of modern medicine, for the Vikings disease could be rampant and minor accidents fatal. Death also meant significant changes in the lives of the living as property was inherited and new men brought to power.

So, how exactly did the Vikings treat their dead, and what was involved in a Viking funeral? Is it possible to have a traditional Viking funeral today?

While stories and archaeological remains suggest that beliefs varied among the different Viking peoples, once consistent belief was that death was not the end. In general, the Viking believed that spirits of the dead passed to another world, several of which are described in Viking myth.

The most famous Viking land of the dead was Valhalla. This was a grand hall in Asgard, the realm of the Aesir gods, ruled over by Odin, king of the Aesir gods and the god of war and wisdom. With the assistance of the Valkyries, Odin chose fallen heroes from the battlefield to live in Valhalla. There, the dead heroes would feast and fight until the arrival of Ragnarok, the end of the world, when they would fight alongside Odin and the gods of Asgard.

Warriors might also find themselves in Folkvangr, the field or people or the field of warriors, that belonged to the goddess Freya. According to the Poetic Edda, half of the warriors that fell on the battlefield would go to Valhalla, and the other half to Folkvangr. Those who died at sea were sometimes said to be taken to the underwater dwelling of the giantess Ran.

The dead were also thought to find themselves in Helgafjell, the holy mountain. This was sometimes described as a specific place, but also sometimes simply as mountains in the vicinity. There the dead led lives very similar to the living, reunited with their families and loved ones.

The Vikings might also find themselves in Helheim, a world beneath the ground ruled by the goddess Hel. Helheim was parted from the world of the living by a rapid river that keeps the living and the dead separated. The gates to the realm are heavy, and once they have been passed, the soul cannot return. Helheim should not be conflated with Christian ideas of hell, it was an afterlife for anyone who did not die in battle.

Nevertheless, the sagas tell of warriors cutting themselves with blades before death in order to trick Hel into thinking that they had died in battle. Within Helheim was a special place, called Nastrond, which was a realm of darkness and horror for the wicked.

Cremation, often on a funerary pyre, was a popular ceremony as it was believed that the smoke from the fire would help carry to deceased to the afterlife. Some modern researchers believe that special plants and woods were added to the funerary pyre in order to produce a particular smoke and smell.

After being burned, the cremated remains of the deceased were then buried, usually in an urn.

The burial of both cremated remains and bodies varied significantly. Some have been found in shallowly dug graves, while others were interred in elaborate burial mounds that could hold multiple bodies. Viking communities also had grave fields, not dissimilar to modern cemeteries.

Grave monuments that marked the site of a burial were meant to both honor the dead, and allow their living descendants to reinforce their social position based on their ancestors. For example, in Jelling, Denmark, Harald Bluetooth created an elaborate royal memorial for his grandparents and to honor himself.

What exactly happened at the Viking funeral that accompanied that cremation or burial varied significantly and depended on local customs. One thing that is certain is that large amounts of alcohol beverages were consumed. According to the account of the Arab traveler Ahmad ibn Fadlan, when one chieftain died, a third of his wealth was inherited, a third was used to supply his grave clothes and goods, and a third was spent on alcohol for his funeral.

It seems that only after the Viking funeral, and the drinking of the funerary ale, could heirs take up their inheritance or become the new master of a homestead. So, a Viking funeral not only sent the dead to the afterlife, but was also an opportunity to reorganize the social hierarchy of the living. The importance of this dual role is shown by funerary monuments that also record inheritance. For example, the 5th century Tune Runestone from Ostfold remarks on both the funeral ale in honor of the deceased master, and declares his three daughters as his rightful heirs.

According to some accounts, the drinking of the funerary ale happened seven days after the death of the person. It may be that the person was temporarily interred for the seven-day period, and then buried in their final resting place as part of the funeral rites.

Popular culture would have us believe that it was common for Vikings to be buried in their magnificent longships, often set alight while sailing off into the sunset. While longships featured in some Viking burials, they were expensive, so they were a luxury reserved for the wealthy. They were also not likely sent to sea, as they would not burn hot enough to incinerate completely, so this would simply result in burned chunks of ship and body washing up on shore.

The wealthy may have built their funeral pyres in longships, or created pyres that resembled the ships, but it was more common for the wealthy to be buried in their ship, with its entire contents intact. While this ritual was only attainable for the wealthy, it was not restricted to men.

The most famous known ship burial, the Oseberg ship, was for a woman, probably a queen or priestess. Dating to around 830 AD, the ship was 70 feet long, nearly 17 feet wide, had 5 oars on each side, and had a pine mast more than 30 feet high.

Boats were probably thought to provide safe passage into the afterlife. The boat was so significant that the Vikings would also sometimes outline burials in stones designed to resemble ships. There are also examples of Vikings being buried with wagons or horses, which were also probably supposed to serve as transportation in the afterlife.

Another custom that was reserved with the wealthy and important was marking death with human sacrifice. There do appear to be examples of servants and slaves being sacrificed and buried alongside their master in order to continue serving them in the next life.

One Viking burial site in Flakstad, Norway, contains multiple bodies in a single grave. Analysis of the remains, their diets and DNA, suggests that the majority of the bodies were likely slaves.

Similarly, according to the reported eye-witness account of the 10th-century traveler Ahmad ibn Fadlan, in one instance a female victim was sacrificed as part of the funeral rights of a Viking chieftain. He claims that the girl was forced to drink large amounts of alcohol before being raped by most of the men in the village and then strangled with a rope and stabbed by a village matriarch. Her body was then burned with the chieftain’s in his funerary pyre.

Most Vikings were buried with more mundane funerary goods, including worldly possessions that reflected their profession in life. It seems that the Vikings believed that they would need items to live well and confirm their social status in the next life.

Grave goods often included jewelry, which was both a symbol of status and source of currency when required. There is evidence of a blacksmith being buried with an entire set of tools, and women being buried with items used to complete household duties. Naturally, in the case of warriors, weapons were included among grave goods.

Weapons found in Viking graves often had their blades bent. This may have symbolized the final death of the warrior, but was probably also designed to deter grave robbing, as quality blades were expensive to produce.

The Viking believed that if the dead were not appropriately cared for, they could come back to haunt the living in the form of Draugr. These are the undead of Norse mythology, and while some stories describe them as drinking blood, they are more like zombies than vampires.

If a community suspected that they were being haunted by a Draugr, they would exhume the recently deceased and examine the bodies for signs of being undead. If the suspect was wealthy and respected, they would re-bury him in a better fashion in order to appease his spirit. If not, they would drive a stake through the deceased’s body in order to pin it to the ground and cut off its head.

If you have always dreamed of being buried like a Viking, you can certainly be buried like a common Viking, cremated or inhumed with the grave goods of your choice. If you are craving the burial of a Viking chieftain, even without the slaves, you are out of luck.

A ship funeral pyre simply won’t burn hot enough to properly cremate a body. Cremation takes up to three hours in a 1,400 to 1,800 degree Fahrenheit chamber. If you are interested in the rather historically inaccurate burning ship at sea, it will not burn hot enough to consume the body and it is likely that charred pieces of ship and body will wash ashore. Therefore, unsurprisingly, this is completely illegal pretty much everywhere.

If you want a send-off in a burning ship on land, you might be able to do it on private property if the body has already been cremated professionally. There are also artisans out there that make coffins in the shape of miniature longships for use at the crematorium.

A party that involves lots of alcohol to help the living honor and say goodbye to the dead, now that is a Viking tradition we can pull off today.