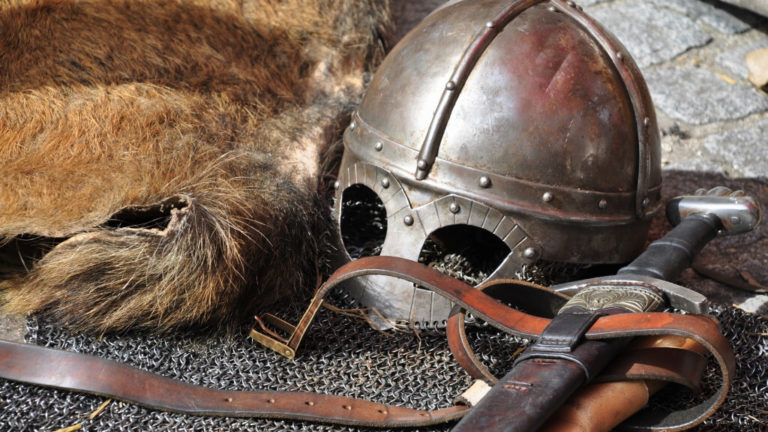 Many stories of terrifying Viking warriors have come down through history. Their ferocity in battle is legendary. But what often makes one set of warriors more successful than another is not their greater ferocity, but their superior technology when it comes to weapons and fighting techniques.

The Vikings themselves understood the importance of their weapons. It was very common for the Vikings to name their weapons, and they are often referred to almost as unique characters in the various Norse sagas.

Swords, known as Ulfberht, were not the universal Viking weapon that popular culture would have us believe. Swords were difficult to make and therefore expensive, so they were a symbol of prestige.

Viking warriors would save booty from raids to buy swords, worth about half a gold mark, or 16 cows. They were highly valued and often passed from generation to generation.

Swords are also found among grave goods, but of the over 100 Viking weapons found in burials, only 16 are swords. Many Viking poems praise chieftains and warriors by describing the fine quality of their sword.

The famous Vikings also often named their swords, and other weapons. Leg-biter was the sword of the Viking King Magnus Barelegs. The Norse sagas feature 92 named swords.

The hilt was usually made from wood, horn or antler, and had a counterweight pommel usually made from cast copper alloy. Swords of the very wealthy might have a gold or silver hilt. Scabbards were hung across the right shoulder and made of wood or leather and were often lined with wool or fabric.

In Norse mythology the fertility god Freyr has a magical sword, Skirnir, that is capable of fighting on its own. He gave up the sword in order to win the heart of the giantess Gerd. Consequently, he is destined to die at Ragnarok without his sword to defend him.

A more common Viking weapon and tool was the axe, or Skeggox (bearded axe). Most Vikings would carry a small axe on their belt. Viking battle axes were usually single-headed and made from iron. They had crescent-shaped heads with a cutting edge between 10 and 45 centimeters in length and a long handle.

This gave the wielder excellent reach when engaging the enemy. Some lager axes had a handle as long as a man and were wielded with two hands. Smaller axes were designed to be thrown or swung. Some axes were known to be able to cut through chainmail and helmets.

Usually plainer than the more prestigious swords, some wealthy warriors had aces with heads elaborately decorated with inlays of precious metals.

Like many other Viking weapons, many axes were given names; 17 axes are named in the surviving Norse sagas. They were often named after she-trolls of Norse myth. King Magnus Barelegs’ axe was named Hel, after the goddess of the underworld.

In one of the sagas, the outlaw Hardar is encircled by his opponents, but manages to kill six of them with his long axe before the head came off and Thorstein Gullknapp killed him with his own axe.

The spear (geirr) was actually the Viking weapon that they used most, and was the standard weapon for the Scandinavian peasant class. Most Viking warriors carried a thrusting spear, which had a metal head between 20 and 60 centimeters long mounted on a wooden shaft.

When in a legitimate battle, as opposed to undertaking an ambush or a raid, the Vikings would take to the battlefield in a wedge formation with their best men, the infamous berserkers, at the front of the wedge.

They would throw spears, and use their spears for stabbing the enemy as the wedge made its way into the enemy ranks, before breaking off into hand to hand battle.

Spears were generally cheap to produce as they used less metal and were made with inferior quality metal than other Viking weapons. Nevertheless, the spear was hallowed as the Viking weapon of Odin, the Norse god of war and the king of the gods, which had the spear Gungnir that was enchanted to never miss its target. The Vikings are also known to have named their spears, with 7 spears named in the Norse sagas.

While the Vikings are famous for fighting in close combat, many warriors were also skilled with the bow and arrow, which was also used for hunting.

Made from yew, ash or elm, Viking bows had a draw force of about 100 pounds and a range of about 200 meters. Arrowheads were made from iron, wood, bone or antler, and there is some evidence that feather flights were also used. A skilled Viking archer could shoot 12 arrows per minute at the start of a melee, before joining the close quarter battle.

Viking archers would also often launch a barrage of arrows from their boats, before making landfall and meeting their enemy in close combat. They were also used in sea battles, along with throwing spears.

In the Norse sagas Gunnar single-handedly defends his home, killing ten of his foes with his bow before the string is cut and he turns to hand to hand battle. Bows were used as weapons in a nautical battle in the saga of King Olaf.

Knives were a staple in Viking life, and they were considered so essential that even slaves were allowed to carry one. The Viking battle knife, the Seax, was a larger and more lethal fighting knife. Generally a one-handed, the Seax fighting weapon was a single-edged Viking weapon with a blade 30 to 60 centimeters long and a hilt made from wood, bone or horn.

They tended to be of cruder design than swords and have a much heavier and thicker blade. Nevertheless, some fine and elaborate examples of this Viking style knife do survive, and seven named Saex fighting weapons are recorded in the sagas.

According to the sagas, Grettir preferred his Saex, called Karsnautr, which he took from Kar’s grave, to a sword when it came to battle. In another saga, Kolr thrusts a spear through Kolskeggr’s leg while he is busy fighting other opponents. In response, Kolr steps in and cuts off Kolskeggr’s leg with his Seax.

While Viking warriors do not appear to have feared a warriors death, they nevertheless arrived on the battlefield prepared. Most Vikings wore armor made from padded leather, which gave some protection from edged weapons.

This type of armor is never mentioned in the sagas, but survives archaeologically. This is probably because the wealthier Vikings that feature in these accounts could afford more elaborate and durable armor. For example, in the Saga of Olaf, Thorir Hund is described as wearing a leather tunic made from reindeer fur, and also enchanted to defend against sword blows.

Wealthier Viking warriors could afford chainmail, which they probably wore over the top of the more standard Viking armor. Chainmail was extremely expensive as it required thousands of interlinked iron rings to be riveted together individually by hand.

Chainmail shirts, which were probably long sleeved and extended below the knees, would have offered protection from cutting, but little against heavy blows of stabbing strikes.

It seems that the Vikings likes to name their armor almost as much as they named their weapons, as three coats of armor are named in the sagas. The most famous of these belonged to Harold Hardrada and was called Emma. She was so renowned that no saga that featured the king fails to mention the exquisite Emma, that reached his angles and which no weapon could bite.

Viking warriors generally carried a one-handed shield into battle, usually of round design made in spruce, fir or pine and ranging between 30 and 35 inches in diameter. They often had iron bosses that covered the hand grip to offer extra protection. They were painted in bright colors, and according to the sagas, some depicted scenes from Norse mythology.

Vikings warriors would generally craft their shield themselves in order to make it suit their size and preferred sighting style. It needed to be big enough for defence while not being too heavy of interfering with his other weapons.

While not all Viking warriors could afford helmets, those who could afford it wore them into battle for extra protection. Viking helmets were generally simple bowl shape designs with a nose guard protruding from the center.

More expensive helmets also often had a guard around the eyes that formed a sort of mask. Many were made from iron, but some were made from just leather.

Despite popular imagery, there is little evidence that the helmets had horns. Not only would these offer no additional protection, but it would give the enemy something to grab onto during battle. If they existed, they were probably for ceremonial use only.

As seafaring warriors, the ship was one of the most important Viking weapons. They were clearly capable sailors on sturdy ships as they were able to reach America half a millennium before their European cousins.

According to contemporary sources, the ships of the Viking were marvelous at sea, with flexible, clinker-built hulls (overlapping planks nailed onto a wooden framework) that allowed them to swim through the sea, and beach easily. They were often compared with dragons, birds and sea serpents.

The Vikings had a variety of different types of ships, but it was their longships (Snekkja) that were used in war. These ships were long, narrow and flat bottomed and could be either rowed or sailed. This also meant that they could enter rivers and creeks during battle.

The hulls were usually made or oak, but pine used for the masts and spars. Viking longships also had high freeboards, which were easier to defend, and also meant that they handled better in heavy seas.

They had steering-boards that projected well below the level of the keel for greater pull, but could be lifted when entering shallow waters.

They also had iron anchors and chains, which allowed the ships to be moored far enough away from land that they were safe from their enemies. The Viking longship gave the Norse warriors a significant edge in battle.