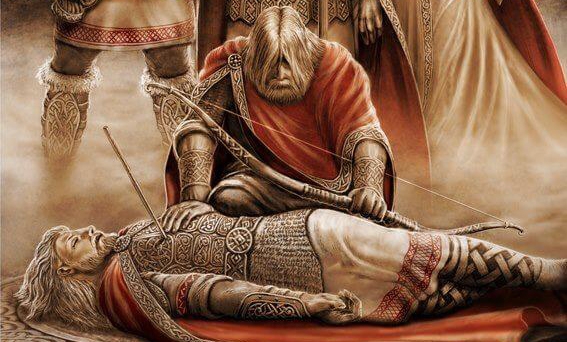 Norse mythology is full of gods and goddesses with mysterious powers and fantastic tales. Of all the Viking gods recorded in Norse mythology, none is described as more beloved by both the gods and men as Balder.

But who was, Balder, this most blessed among all the gods? And why is this celebrated Viking god most famous for his death?

Find out more about the various stories from Norse mythology that surround Balder’s death with this video from the University of Colorado.

Balder (also known as Baldr or Baldur) was the Viking god of light, joy, purity and summer, and the most beloved creature in Norse mythology. He was said to be so handsome and so noble that light emanated from his body, and even the most beautiful flowers bowed before him as he passed.

He was described in Norse mythology as the height of perfection, being both the fairest and wisest among the gods of Asgard.

These speculations have been postulated mostly because the Old Norse term baldr would imply that he had warlike traits, when in the main account of Balder from Norse mythology he is portrayed as peaceful and even innocent. However, this objection probably gives undue weight to a single account.

The medieval Danish account of Balder by the historian Saxo Grammaticus suggests that he was always up for a fight. This would match the character of his father Odin and half-brother Thor, who were considered both war-hungry and noble by the warlike Vikings.

According to Norse mythology, Balder was the son of Odin and Frigg. Odin was the king of the Asgardian gods and the god of both war and wisdom. Frigg was the goddess of marriage, fertility and motherhood, and keeper of the Domestic Arts. While Frigg is the wife of Odin, she is not the mother of all his children. For example, Thor was the son of Odin with the giantess Jodr.

Balder had his own family, a wife Nanna and a son Forseti. Little is known about Nanna from Norse mythology, except that she was the wife of Balder, and she is included in several lists of Norse goddesses. One account suggests that she was a human female, the daughter of King Gevar.

In this story from Norse mythology, Balder competes for Nanna’s affections with a human named Hodr. Despite his many blessings, Nanna chooses Hodr, and Balder falls into a deep depression. How he eventually won the maiden’s hand is not recorded in any of the surviving records of Norse mythology.

Balder’s son was Forseti, the Norse god of justice. He is described as being an extremely peaceful being that spends much of his time meditating, a description which has probably added to the image of Balder as an innocent and peaceful deity. Forseti lived in Asgard in a beautiful house called Glitnir, which had a shining silver roof and gold pillars that radiated light. This house also served as the court of justice for solving all disputes among the gods, for which Forseti was the law speaker.

According to Norse Mythology, Balder too had a beautiful house in Asgard called Breidablik, meaning broad-gleaming. It is described as the fairest place in the Norse universe, which nothing impure could enter.

According to Norse mythology, Balder started to have prophetic dreams about his death. This caused his mother Frigg great concern, so she procured an oath for everything in the Norse universe that it would never hurt, or assist in hurting, her son. Balder’s invincibility was a source or great amusement to the other gods, who started using him as target practice for throwing knives and shooting arrows, watching them bounce off him harmlessly.

Jealous or Balder, the trickster god Loki disguised himself as an old woman in order to speak to Frigg and see if Balder had any weaknesses. Frigg revealed that she had failed to secure an oath from the plant mistletoe, which was young and innocent and posed no threat to her son.

Loki immediately fashioned a dart from a twig of mistletoe. He then joined the gods, who were entertaining themselves by throwing things at Balder, and asked Balder’s blind brother Hodr why he did not join in the game. Hodr explained that he could not see Balder, and also had nothing to throw. Loki pretended to help Hodr, giving him the mistletoe dart and guiding his hand. When the dart struck Balder it slew him immediately, throwing the gods into confusion.

Not willing to accept the death of the most beloved of the gods, Hermod, yet another son of Odin, was sent to the underworld to speak with the goddess Hel and ask if Balder could be returned to them. After much convincing Hel in fact agreed, on the condition that everything both alive and dead weep for Balder, providing that he was universally loved. Everything in the world did indeed weep for Balder, except for one witch Thokk, who refused to shed a tear. Most accounts suggest that this was Loki in disguise, thwarting the plan to return Balder.

The aftermath of Balder’s death was bloody. He was ceremonially burned on his ship Hringhorni along with his wife Nanna, who either died of grief or threw herself on the pyre in a state of grief. Thor also kicked the dwarf Litr onto the funeral pyre to burn alive. Odin had a son, Váli, with the giantess Rindr who grew to adulthood in a single day for the specific purpose of killing Hodr, despite the fact he was a pawn in Loki’s trick. Meanwhile Loki was chained to three boulders and a venomous snake placed above his head to drip venom onto Loki’s face for eternity.