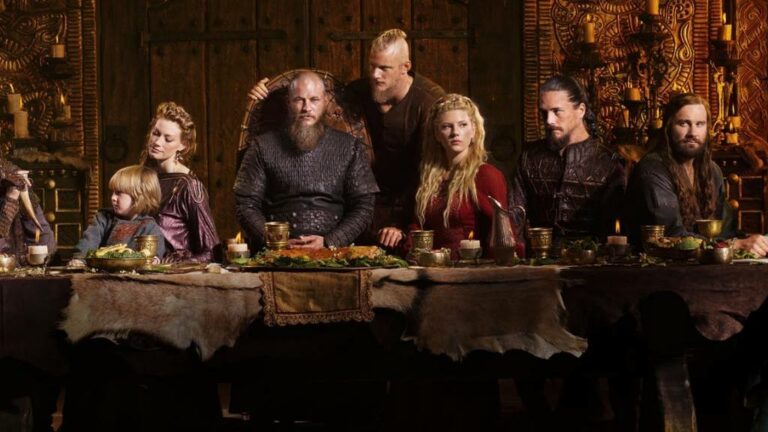 When we imagine the Viking diet, we probably think of a group of warriors roasting meat, which they have hunted, over and open fire and eating it with their bare hands while drinking mead.

While the Vikings ate a lot of meat, and certainly liked their drink, the Viking diet were more sophisticated that campfire cooking. It was also healthier. Even the poorest Viking had a much healthier diet than the average English peasant in the Middle Ages.

So, what exactly did the Vikings eat to power their warrior society?

When did the Vikings Eat?

In the Viking diet it was customary to eat two meals a day. Their day meal, called dagmal, was basically breakfast and served about an hour after rising.

The evening meal, called Nattmal, was served in the early evening at the end of the working day. Both Viking meals would have been hearty and probably include meat or fish, to give the Vikings the energy they needed to complete the day’s work. Meals were usually eaten out of a wooden bowl using a knife and spoon.

But the Vikings also knew how to eat for pleasure, and feasts were a feature of life, regularly mentioned in the sagas. They had several major feasts throughout the year, including Jól, the Old Norse winter festival, Mabón, the autumn equinox, and Ostara, the spring equinox renewal festival. There would also have been harvest celebrations, and feasts for occasions such as births and marriages.

Feasts could last for several days, for example Jól lasted from 20-31 December. At these festivals all Vikings would have been able to eat a more varied range of foods than they would normally. These would have made them not only important community events,

One of the main reasons that the Viking diet is considered to have been pretty healthy is that almost everyone in Viking society, from kings to the lowest peasants, ate meat every day. The most common meat in the Viking diet would have been pork, as pigs are easy to breed and mature quickly.

But the Vikings reared a variety of animals, the meat from which graced their tables, including cows, sheep, goats, chicken and ducks. Animals were generally slaughtered in November and the meat preserved for eating over the following months. This was so that it was not necessary to feed large herds over the winter.

The Vikings also bred horses for their meat, as well as using as beasts of burden. This brought the Vikings into conflict with Christian leaders, as church doctrine forbade the eating of horse meat.

As well as raising animals, the Vikings were hunters. They would have killed and eaten the meat from small game, such as hares and squirrels, but also larger beasts including reindeer, elks and even bears.

What exactly they would have hunted depends on where in Scandinavia they were situated. For example, Vikings living in Greenland are known to have hunted and eaten seal, caribou and even polar bear.

Naturally, as a seafaring people, the Vikings ate a lot of fish. This is a tradition that is still seen in the modern Scandinavian diet, which includes a significant amount of fish. Herring were abundant and a staple in the Viking diet, but they also ate other fish including Salmon, trout, eels, shellfish and cod.

Fish was prepared in a variety of ways: dried, smoked, salted, pickled or preserved in whey. The Icelandic dish knows as hárkal, which involves allowing a shark to ferment underground for a few weeks, is probably a relic of Viking practices.

While the Vikings certainly would have roasted their meats on some occasions, such as feasts, boiled was the most common way to prepare a Viking meal. The most common viking meal was a stew that included a variety of meats and vegetables. The stew would have been kept on the boil for several days, with new meat and produce being added as it was eaten down. This would have created a thick and tasty broth, which was eaten with bread.

The most common bread eaten as part of the Viking diet was a basic flatbread, which would have been eaten with most Viking meals. But the Vikings were inventive and had access to both wild yeasts and rising agents produced from dairy products. They used this to make sourdough style breads.

Breads were made from a variety of different crops which the Vikings farmed. The northern climates in which the Vikings lived are especially good for growing barley, rye and oats, which would have been the staple crops of the Vikings. Crops were sown in spring and harvested in late summer and fall.

The Vikings certainly also foraged for grains, as they are known to have made some beads from bark-birch bark, which is extremely nutritious when dried and ground. Archaeological excavations of Viking cesspits discovered undigested seeds from poisonous weeds, which probably inadvertently made their way into Viking meals.

Many Vikings were farmers, and Viking farms were generally a small affair, only large enough to serve the family with some produce available to sell to the community. Nothing like the megafarms that we are accustomed to today.

Most farmers would have kept cows, which were slaughtered for their meat, but were more prized for their milk. The Vikings drank milk, and also used it to make cheese, curds and butter. In the Norwegian village of Vik they still produce a cheese called Gamalost, using methods that are believed to date back to Viking times.

A pungent, golden-brown cheese with a crusty texture and strong flavour, it is made from pure skimmed cow’s milk. It contains 50% protein and only 1% fat. The Vikings also considered cheese and aphrodisiac.

The Viking raised chickens, again not just for their meat, but also for their eggs. But the Vikings also foraged for eggs from wild animals. Gull eggs collected from clifftops, were considered a delicacy.

When it came to fruits, vegetables and nuts, the Vikings would have eaten a range of farmed and foraged produce.

The Vikings are known to have cultivated cabbages, onions, garlic, leeks, turnips, beans and carrots. However, carrots were not the orange vegetable that we are accustomed to today, but either purple or white. These all would have made their way into the stew that was the basis of many Viking meals.

The Vikings are known to have apple orchards, but also foraged for much of their fruit, including wild apples and a variety of berries such as sloe berries, lingon berries, strawberries, bilberries and cloudberries.

Berries are rich in fibre, Vitamin C and manganese and would have played an important role in keeping the Vikings healthy. Hazelnuts were also plentiful in the region and were part of the Viking diet, providing them with Vitamins B, E and magnesium.

While men would have been responsible for hunting, women and children would have done most of the gathering of wild plants, including herbs. Alongside berries, they would have collected things such as nettles, cresses, coriander, cumin, mustard and wild horseradish. This reliance on foraging means that much of the Viking diet would have been seasonal.

The other major seasoning that the Vikings used was honey, which seems to be the only sweetener that the Vikings had access to. The Viking probably kept hives, at least in the southern areas of Scandinavia. The Nordic bee, also known as the Brown bee, that is native to the region is not aggressive and very unlikely to swarm. Honey would have been traded, used in cooking, and of course for making mead.

Just as the Vikings traded honey, they would have acquired other exotic foods, in particular spices, through trade. These foods were probably mainly reserved for the wealthy and for feasts.

The Viking reputation for imbibing copious amounts of alcohol appears to be well earned. They really drank ale on a daily basis. In fact, beer would have been taken by the Vikings on their ships as the fermentation and brewing process meant that it stayed fresh for longer than water. This type of beer would have had a relatively low alcohol content

Mead and imported wines would have been reserved for feasts and special occasions. Mead was made locally by fermenting honey with water, and sometimes other ingredients such as fruits, spices, grains and hops were sometimes added. It could range in alcoholic content from 3.5% ABV to 20% ABV, depending on how it was prepared.

Less good than they say for the sons of men is the drinking oft of ale: for the more they drink, the less they can think and keep a watch over their wits.