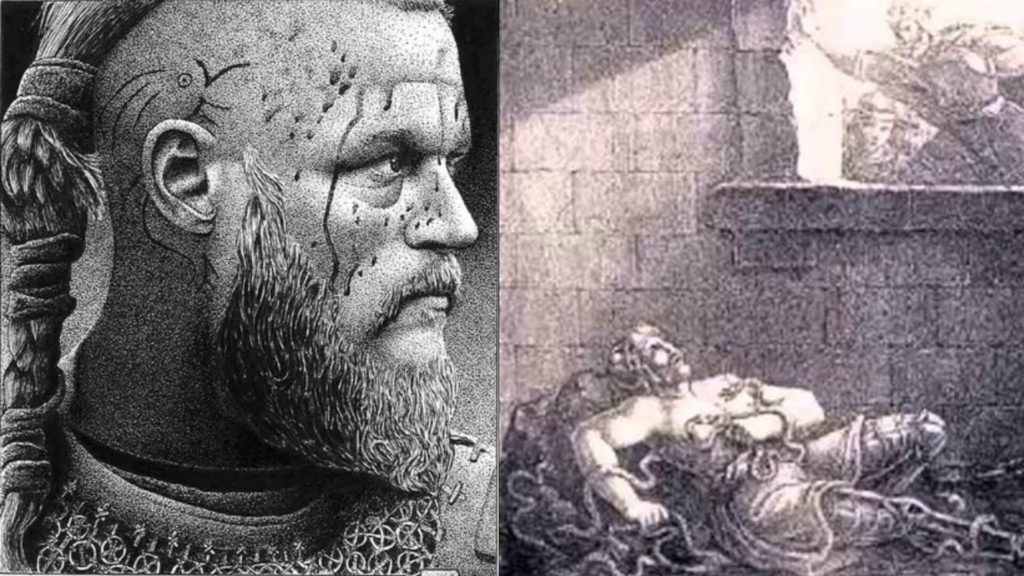 Reality or Fiction? – By Arith Härger

1.Was Ragnar Loðbrók a real historical figure, or a fictional heroic character?

We need to take into consideration two main aspects when we deal with historical sources concerning legendary heroes: In the case of Ragnar we have to take in mind that all the things that are said about him are obviously not true or even real, which makes us doubt about a real physical existence of this famous Viking.

Ragnar’s legends were written between the 12th and the 13th centuries so it’s a long historical period already far from the Viking Age, a period in which Ragnar supposedly lived. This leads us to think about the amount of truth in oral traditions, before being put to parchment in an era already culturally and religiously far from the Viking Period.

And precisely because of this factor we have another aspect to take into consideration:  earlier medieval Frankish chronicles describe a Viking named “Ragnar”, in these particular sources the name being Reginheri, the Latin equivalent of “Ragnar”.

This Viking is indeed mentioned, but we cannot say with a hundred percent certainty that this is the one – the famous Ragnar Loðbrók who did all those heroic and fantastical accomplishments.

In order to consider Ragnar Loðbrók a real historical character, we must find a real person, historically recognized by this name who actually performed a significant number of acts attributed to the legendary Ragnar Loðbrók.

Let’s explore the Sagas and historical sources were Ragnar is mentioned. He appears in the Danish History (Gesta Danorum) by Saxo Grammaticus, he is also mentioned in the Saga of Ragnar Lothbrok (Ragnars saga Loðbrókar), in the Saga of the Sons of Ragnar (Ragnarsson þáttr), in the Frankish chronicles as previously mentioned, and in the poem Krákumál.

With the exception of the Danish history which is a semi-legendary work with real historical content, and obviously the Frankish Chronicles, the other works are productions from the 12th and 13th centuries but considered fictional stories, and that’s a real problem because those are exactly the main sources about the life and deeds of Ragnar Loðbrók – mainly works of fiction.

Historical records of the 9th century (the period in which, supposedly, Ragnar Loðbrók lived) there is only one single mention of a Viking with that name, a Viking named “Reginheri”. This Viking chieftain led 120 longships up the River Seine to attack Paris.

According to the Frankish chronicles this Viking succumbed to the plague that devastated the Vikings’ besieging of Paris. Surprisingly, “Ragnar” appears once again in history the following decades. He raids Scotland and the Shetland Isles, settles in Dublin, attacks Anglesey and finally after so much glory and great deeds he dies in a pit filled with snakes at York.

In “truth” in these sources it seems Ragnar died at least five times during his career as a Viking. So at this point it seems that there is the possibility that different Viking chieftains who perhaps shared similar names, or adopted a title of a legendary hero, has their stories conflated into one character – Ragnar Loðbrók. In this manner a great legendary hero lives on, perpetually, continuing to be exalted and to be an icon and role-model for other Vikings.

But first let’s focus on Reginheri. He died in France in 845 CE. So he could not have participated in the later events which form the main part of the adventures of the legendary Ragnar Loðbrók.

In addition to this historical fact, there are no evidences that Reginheri was the father of any of the individuals who were later declared children of Ragnar Loðbrók.

Thus, this Reginheri in great part takes away the notion that Ragnar Loðbrók existed, or at least his great deeds were performed by someone else, as previously demonstrated.

Also, in all of the sources I’ve mentioned earlier, there are loads of differences from account to account, with the exception of Ragnar’s death which is told in the same manner – sort of executed in England in a pit filled with serpents. But the rest of the accounts of his life diverge and there isn’t a clear line of events that give us the notion that indeed that’s how he lived his life.

2.What about the name Lodbrók?

In the Danish History Ragnar is described has having been the grandson of the king Sigurd Hring of Norway, having succeeded his grandfathers and ruled over Norway and Sweden later on.

In this version of his story, Ragnar first married Lagertha, with whom he had three children. Later he divorced her and went to marry Thora Borgarhjört, with whom he had two children. To be able to marry Thora, Ragnar had to kill a giant serpent, or a Dragon in other accounts. In this particular event he wore furry pants/shaggy breeches, and that’s where the name Loðbrók comes from, that’s what it actually means.

So he used these pants to protect himself from the bite of the animal. With this deed he was known henceforth as Ragnar “Hairy-Pants”. It’s not very often mentioned nowadays, but in some older accounts we have the name “Shaggy Breeks” as mentioned in Scotland, which can be translated to “breeches”.

Loðbrók is not a surname, but simply a nickname, which makes it difficult to track real-life individuals with this name because it’s not a family name, therefore there isn’t a continuous usage of the name throughout the generations.

The Viking surnames were based on the given name of one’s father, the children adopted the father’s first name; this still happens in Iceland nowadays. So the children of Ragnar would have been named Björn Ragnarson or Ivar Ragnarson, for instance.

However, it’s important to remember that there are no records of the name Loðbrók during the time when Ragnar supposedly lived. This name only appears in the records 200 years later, after Reginheri’s death in Paris, and the name comes alone, without any link to Ragnar.

The name appears as “Lothbroc” in the Gesta Normannorum Ducum, in 1070 CE, in which “Lothbroc” is called the father of Björn Ironside. It was Ari Þorgilsson (1067–1148 CE), Iceland’s most prominent medieval chronicler, who, in the 12th century, mentions Ragnar and Lothbroc as the same person for the first time.

In the fragments of the Annals of Ireland there is a particular source of interest which is often related to the legend of Ragnar Lothbrok. There was a certain Ragnall (Rognvald), son of Alpdan (Halfdan), king of Norway.

This Ragnall is mentioned, as well as his deeds, but most importantly this character comes before the fall of York to the Danes, which is during 866 and 867 CE, but already after the death of Reginheri in 845 CE. But This Ragnall is the closest we get to someone from Danish royalty who has done great deeds.

Maybe it’s possible that Ragnall and Ragnar Lothbrok were the same person, although it’s clear that the names are not equivalent; these are totally different names and not etymologically related.

But could Ragnall and Lothbrok have been the same person?

We have already seen that the only historically attested Ragnar (Reginheri) cannot reasonably be regarded as a historical prototype for Ragnar Lothbrok. Thus, it appears that the best attempt to argue for a historical Ragnar Lothbrok is to propose that Ragnall and Lothbrok were both the same person, and then assume that the similar (but different) names – Ragnall and Ragnar – were accidentally confused, or perhaps it’s the product of dialects and mispronunciation.

By this we can assume for a moment that Ragnall and Lothbrok both existed and were the same person, from which it could then reasonably be assumed that a man named “Ragnall Lothbrok” existed and later on in history was misnamed “Ragnar Lothbrok” by a minor error in the Icelandic sources.

Even though, this doesn’t seem to be very plausible. Let’s take these following dates into consideration:

793 – It’s the Viking attack to Lindisfarne in Northern England.

845 – Is the first attack to Paris in which Reginheri died.

It seems clear that Reginheri isn’t the real Ragnar Lothbrok, because he died between two major events in the history of Viking Raids in which Ragnar has King of Norway and Denmark would have played a major role.

And during Reginheri’s time the king of Denmark was Horik I which he himself is a Semi-legendary Danish monarch (827-854), and Norway had no King yet until 872, Harald Fairhair (872–932). The Sagas tells us that Ragnar was king of Denmark and Norway, but this union only came in the 10th century with Harald Bluetooth (961–980).

4.Finally, who was Ragnar Lothbrok ?

In conclusion about these dates, Ragnar Lothbrok becomes a 9th century legendary king of Denmark. It is possible that throughout the ages and in different sources, names got mixed and there was a clear confusion between the early Irish Annals and the Icelandic sources, and in-between the Frankish chronicles.

Ragnar seems more likely to be the product of a composition between several historical kings and Vikings. What I mean is, if there is any historical basis for the legend of Ragnar Lothbrok, most likely it is the result of a combination of two or more distinct individuals into a single figure with the characteristics of all of the historical characters of great renown that were the symbol of the Viking Raider in many aspects.

Furthermore we must not forget that only two manuscripts of the Saga of Ragnar Loðbrók (Ragnars saga loðbrókar) survived and reached us today. They were written at the start of the 15th century, although they are thought to be retellings of a lost original written source around the 13th century.

surviving manuscript presents Ragnar’s Saga as the direct continuant of the Völsunga Saga. This is the main source of the story of Ragnar. This saga includes material telling of Ragnar’s death and the revenge of his sons, which is recounted in the next chapter of this very saga.

Further tales of Ragnar were included in the lost Skjöldunga Saga, and I repeat – lost! – but fortunately a large portion of this saga was included in a Latin version of the saga written by the Icelandic historian Arngrímr Jónsson in 1596.

But how far the translation from Old Norse to Old Icelandic, and then to Latin, was really maintained true to the original source? Which in turn was already a source written in a time culturally far from the time of Ragnar Loðbrók.

So what we have as a conclusion is that Reginheri existed, Ragnall existed, a Lothbrok existed, but they are not the same person, and their stories got mixed and a single heroic figure was created – Ragnar Loðbrók.

And I do believe that was the exact purpose; to create one single figure to be praised as the individual that represents all the traits and ideals of a “perfect Viking”, almost like a god to be honoured and to be a role model for the Norse peoples. A role model of bravery, honour and heroism.

Much like what happened to the legendary King Arthur, whose origins come from Welsh mythology, passing through Celtic and Roman semi-legendary histories, to become a war hero of the Britons and all the way to become the exemplar of medieval chivalry.

Ragnar Loðbrók in the same way became the legendary hero that represents all the pain, suffering, challenges, honour, bravery, great deeds and great historical events of the Viking Period.

Dijkstra, Jelmer; (2013). Rulers of Jorvik – A critical examination of the contemporary, Anglo-Norman, and Scandinavian sources pertaining to the rulers of Anglo-Scandinavian York. University of Utrecht.

Kacani, R.H.; (2015).  Ragnar Lothbrok and the Semi-Legendary History of Denmark.

Schlauch, Margaret; (1978). The saga of the Volsungs: the saga of Ragnar Lodbrok together with the Lay of Kraka. New York: Ams Press.