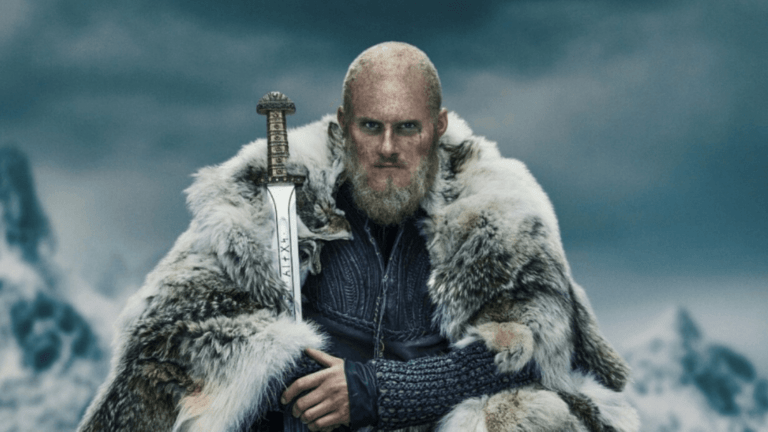 The Viking sagas are full of powerful warriors that called themselves kings while raiding across Europe – it is difficult to know how much of their stories are history, and how much are legend.

One of the most memorable of these mythical figures is the 9th century Viking raider Bjorn Ironside. One of the many sons of Ragnar Lodbrok, according to the Saga of Ragnar Lodbrok and his Sons, Bjorn and his brothers raided across Scandinavia, France, England and the Mediterranean before Bjorn returned to Sweden as king and established the Munso dynasty.

Read on to learn more about the legend of this fearsome Viking warrior.

While it is impossible to know how much of Bjorn Ironside’s story is historic, and how much is legend and stories of other Vikings that have been attributed to him, there was a real Bjorn Ironside that lived in the 9th century. He is mentioned in the contemporary Annales Bertiniani and Chronicon Fontanellense.

If this is the same Bjorn Ironside of the 13th century sagas about Ragnar Lodbrok and his sons, then Bjorn was one of the many sons of Ragnar. Ragnar was the son of the King of Denmark Sigurd Ring, and had many wives! According to the sagas, bjorn ironside wife was Thora, the daughter of the Jarl of Gotland, and he won her hand after ridding the area of a dragon. With her he had two sons, Eirik and Agnar, but shortly after Thora died.

While raiding the Norwegian coast Ragnar then encountered Aslaug. She is said to have been the daughter of Sigurd and Brynhild, the legendary dragon slayer and Valkyrie of Wagner’s opera. Aslaug lost her parents at a young age and lived with a poor family that called her Kraka and hid her parentage. Despite her apparent humble origins, Ragnar fell for her looks and wit. Together they had several sons: Ivar the Boneless, Bjorn Ironside, Hvitserk, Rognvald and Sigurd Snake-in-the-Eye.

According to another source, the Gesta Danorum, Bjorn also had a half-brother Fridleif by the shieldmaiden Lagertha, and another half brother named Ubbe by an unknown woman. He is significant as according to one story, Ubbe wanted to usurp his father’s throne and enlisted Bjorn for help, but Ironside refused to be involved in such treachery.

Bjorn Ironside probably had some sisters as well, but their names have not come down to us through history.

Bjorn Ironside spent most of his life as a Viking raider. It seems that when his father became King of Denmark, he followed the custom of expelling second sons in order to have them out of the way.

It seems that while Ragnar kept his two sons by Thora with him, the rest were sent away. Though they were far from rejected, each left at the head of a number of Viking ships.

It seems that the brothers first set their sites on Scandinavian territories, setting themselves up on Zealand with the oldest of them, Ivar the Boneless, as their leader. From there they raided Jutland, Gotland, Oland and other minor islands.

While Ivar seems to have been the strategist of the group, Bjorn was known as the muscle and was considered a particularly ferocious warrior whose presence could turn the tide of battle. He earned his nickname Ironside for his iron hard muscles.

The pressure that their presence put on the Swedish king led their older brothers, Eirik and Agnar, to go to the king and request his surrender. Instead they were killed, and the brothers released their vengeful wrath on Sweden, conducting brutal raids on the territory, burning, pillaging and killing everyone they encountered. Eventually Sweden came under the aegis of Ragnar.

After this, it seems that the brothers parted ways for a time, conducting their own raids around Europe. We hear of Bjorn in France in 855, where he teams up with another Viking leader, Sigtrygg, to sail up the Seine and assault the forces of Charles the Bald. While the Viking army did not defeat the French forces, and the other Viking leader left, Bjorn created a fortress for himself on the island of Oissel near Rouen, where he conducted raids, including on Paris. Unable to dislodge him, Charles the Bald soon came to an agreement with Bjorn, letting him keep the territory that he had won in exchange for respecting the rest of his kingdom.

In 861 Bjorn joined another Viking leader called Hastein, and together they sailed around the Spanish Atlantic Coast and into the Mediterranean, bound for Rome and her riches. On the way they sacked Pisa, and ended up at Luni, which they mistakenly thought was Rome. Seeing the defences of the city, they decided that a siege would take too long, and so resorted to trickery.

The Vikings sent a message to the Bishop of Luni saying that their leader was either dying or dead, and at the last minute he had converted to Christianity and wanted to be buried on sacred ground. The bishop was taken in and let a small group of Vikings into the city. Upon passing the city gates, Bjorn jumped up, either from his sick bed or his coffin, and held the gates to let the Vikings enter the city.

Despite their success, the Vikings did not continue on to Rome, deciding that it was just too far.

Bjorn Ironside and the Saga of Ragnar Lodbrok

The brothers found themselves reunited in 866 by the death of their father Ragnar. It seems that the Viking warrior was getting too arrogant and claimed that he could take England with only two ships. Instead he was captured and killed by King Aella of Northumbria, who apparently threw him into a snake pit.

Seeking vengeance, the brother descended on England with 400 ships and set themselves up in York, where Ivar the Boneless had created a stronghold and found allies. Together they lead a “Great Heathen Army” that devastated England and destroyed the forces of king Aella. The king himself they tortured to death. According to the stories, they carved an eagle into his back and then salted the wound. After this, they extracted his ribs with a sword in such a way that it also pulled out his lungs, eventually killing him.

Bjorn Ironside became the king of Sweden (or at least the part of it around Uppsala and the centre) either upon the death of his father, or he may have been gifted the territory before his father’s death.

How did Bjorn ironside die ?

Nothing is recorded about the death of Bjorn, but it may have been peaceful, as he was succeeded to power in Sweden by his son Eirik, who was in turn succeeded by the son of Bjorn’s other son, Refil. Bjorn may have had more sons and daughters, but no other information survives about his wife and children.

Bjorn is credited with founding a dynasty that ruled in Sweden from the 860s until 1060, called the House of Munso. The dynasty is named after a barrow found on the island of Munso in the 18th century which antiquarians claimed belonged to Bjorn.

Thus, Bjorn’s legend lived on and became part of the fabric of Swedish culture. But what do you think? How much of Bjorn Ironside’s story is history, and how much is legend?