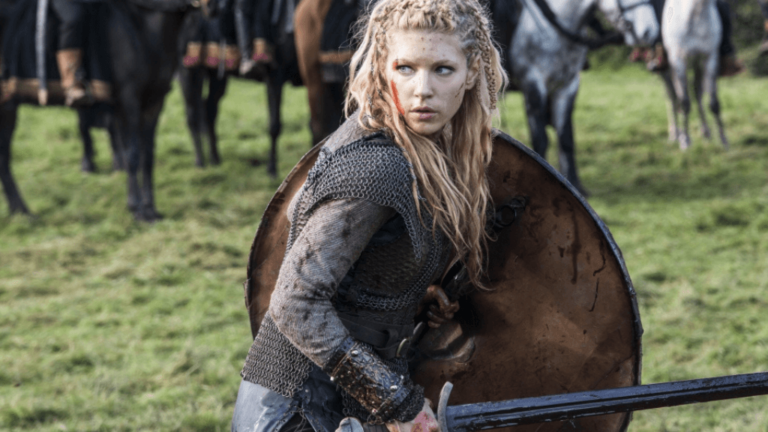 Indisputably one of the most popular characters in the Vikings TV Series is Lagertha, the legendary Danish shield maiden warrior who was the first wife of Ragnar Lothbrok, mother of Bjorn Ironside, and, at one point, queen in her own right.

But how much of this character is based on historical facts and how much is a fantasy created for our entertainment? Let’s take a look at what we know.

While several surviving sources tell the story of the famous Ragnar Lothbrok, only one mentions Lagertha (Hlathgerth in Old Norse), the Gesta Danorum of Saxo Grammaticus.

This was a Latin work about Danish history written in the 13th century. While the latter books seem to be based on genuine history, the early books set in the 9th century, which tell the stories of Ragnar and Lagertha, seem to be based entirely on legend.

So, while we can talk about how closely the Lagertha of Vikings matches what Saxo says about her, it is difficult to say how much of what Saxo says can be considered fact, and how much fantasy.

Saxo does describe Lagertha as the first wife of Ragnar Lothbrok. But rather than being young sweethearts that rose to power together, Ragnar was already a king when he set his sights on Lagertha.

According to Saxo, Ragnar had recently followed his father Siward Ring to the throne of Jutland, in Denmark. He decided to seek revenge on King Fro of Sweden, who had killed Ragnar’s grandfather, King Siward of Norway, and put many of the females of his household into a brothel.

Seeking revenge, he traveled to Norway, where he was joined by a number of women who dressed as men to take to the battlefield, indignant at the actions of King Fro.

Lagertha was presumably among these women.

In the ensuing battle, Lagertha is described as distinguishing herself. She is eulogized by Saxo as a skilled Amazon warrior. While she looks like a maiden, she has the courage of a man, and only her long hair flowing down her back mark her out as a woman, as she outmatches the men around her in her brave deeds.

It is worth noting here that while we see many shieldmaidens on Vikings, the evidence suggests that very few Viking women went into battle with their men. You can read more about this here.

Ragnar was so impressed by Lagertha’s ferociousness that he credits her with winning the battle, and naturally falls in love with her. Luckily, she was also of noble birth, so it was appropriate for him to pursue him.

Lagertha lived in the Gaulardal Valley in Norway, so Ragnar starts courting her from a distance, sending her messages.

Lagertha pretends to be interested in Ragnar, but at the same time she sets up defences around her home to prepare for his arrival.

When Ragnar arrives to take Lagertha as his wife, he finds a bear and a ferocious dog on her porch. He manages to slay both and claim Lagertha.

Together Lagertha and Ragnar have three children, two unnamed daughters and a son called Friedlief, who does not appear in the TV series.

Bjorn Ironside, her famous son on Vikings, was in fact another son of Aslaug, and he was a full brother of Ivar the Boneless, Hvitserk, and Sigurd Snake-in-the-Eye. He never battled with Ivar, and Ivar was in fact the oldest, rather than the youngest. Ubbe was a son of Ragnar with his second wife Thora (but more on her shortly).

According to Saxo, after a few years staying in Norway with Lagertha, Ragnar must return to Jutland to deal with unrest. On the way, he finds himself called on to battle a group of wild snakes let loose by Thora, the daughter of the King of Gotland, in Sweden.

As a reward for dealing with the problem, Ragnar is given Thora’s hand in marriage. This presumably precipitated his divorce from Lagertha, though the details are not covered by Saxo.

Just like on the show, when Lagertha’s marriage to Ragnar ends, she marries another Jarl, but continues to support Ragnar.

He asks her for her aid dealing with problems in his homeland, and she not only sends 120 ships, but goes herself. Again, her ferociousness as a warrior proves a deciding factor in Ragnar’s success in the battle.

Also, not dissimilar from the series, Saxo says that when she returns home, Lagertha kills her husband with a spear she had hidden in her dress, and usurped his name and began to rule in her own right.

As we have already said, how much of Saxo’s story is fact and how much is fiction is unknowable. However, there are some who argue that Saxo’s story of Lagertha is based on the stories of the goddess Thorgerd. She was a local goddess worshipped in the Gudbrandsdal area of Norway in the 10th century.

This goddess seems to have been involved with Hakon Sigurdsson, a Jarl of Halogaland. She is described as flying to the assistance of Hakon and helping him with ferociousness in a very similar way to how Lagertha is described as helping Ragnar.

It is plausible that Saxo may have been inspired by stories of this goddess when crafting his description of Lagertha.

It is fair to say that the strong portrayal of Lagertha on Vikings has created a modern day vision of “our Lagertha”, but how does this match up to the sources?

The TV show gives the warrior woman a much greater role in the story of Ragnar Lothbrok, and also recasts her as the mother of Bjorn Ironside in order to create drama between the sons of Ragnar.

But, while these facts are incorrect, the show seems to capture the spirit of the person that Saxo was trying to portray.

She was mighty in battle (though the historical existence of shieldmaidens is questionable), and loyal to Ragnar and helped him even after they separated. She sought power in her own right, and rose to the station of Jarl, something that would have been unimaginable for most women, even if she never made it to queen.

Either way, both Saxo’s Lagertha and our Lagertha are very impressive women.

What do you think of the differences between Lagertha on Vikings and the Lagertha recorded in the sources?