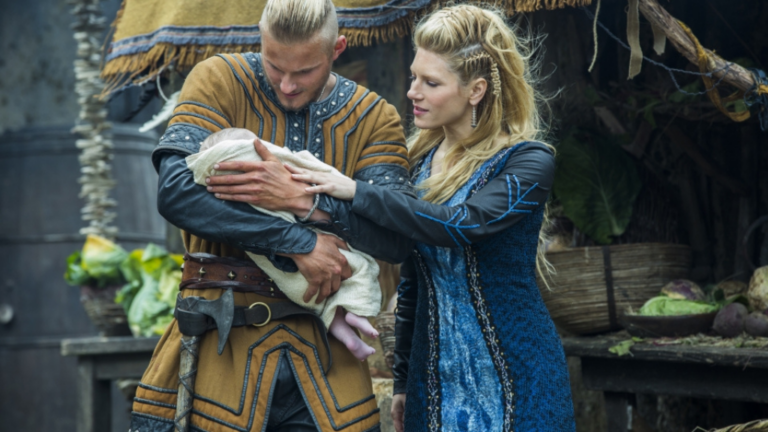 Looking for Viking names for your loved ones? Here is our list of 40 of the best Norse names that have come down to us through the sagas and inscriptions.

What’s in a name? The Vikings believed that their runes were more than just an alphabet. Words had power, and a word written down had the power to change the world. So, does a name have the power to shape a person?

Let’s talk about last names first. Children were called “son or daughter” of their father. So, the sons of Ragnar would have had the last name Ragnarsson or Ragnarsdottir.

However, it was also common that when a person rose to fame, they were given a nickname in place of their last name that reflected their individual character or achievement. So we get Ragnar Lothbrok (hairy breeches), Bjorn Jarnsida (Ironside), and Ivar hinn Beinlausi (the boneless).

But how did the Vikings choose names for their children?

As is common across many cultures, children would often be named for their parents, grandparents, or other people who were important in their lives. We can see examples of this in Vikings, with Sigurd Snake in the Eye named for his grandfather, the hero Sigurd, and Bjorn naming his daughter Siggy, after the women who sacrificed herself to save his younger brothers.

Names were also often selected to honor the gods or heroes. Again, on Vikings, Bjorn’s first wife was called Thorrun, which honors the god Thor. Nanna was also a popular girl’s name, which was the name of the goddess that was the wife of Balder.

The Vikings also believed that words that power, and that is why the runes were not just an alphabet, but also a magical tool kit that could influence destiny. Therefore, giving a child a potent name could bring that power into their lives. Therefore, there is no surprise that many kings named their sons Harald, which means ruler, and their daughters Hilda, which means fighter.

1.   Bard – Means “battle against peace”, and is also linked to the name Harbard, a mysterious old wander that was thought to be Odin.

2.   Bjorn – Means “bear” and is therefore also linked with the fearless berserker warriors, and, of course, the famous Bjorn Ironside.

3.   Einar – Means “one who fights alone”, it is linked to the word einherjar, which is the term for the slain warriors that live in Valhalla.

4.   Eirik – Means “king forever”, and of course is also the name of the infamously hot-tempered Eirik the Red.

6.   Gunnar – Means “army” and was the name of a 10th-century Icelandic chieftain.

7.   Gustav – Means “staff of the gods” and is the name of the actor that played Floki in Vikings.

8.   Hagen or Hakon – Means “the highest son”, and Hakon the Powerful was a king of Norway at the end of the 10th century.

9.   Hastein – Means “stony rock” and is the name of a Viking that raided around Spain and the Mediterranean in the 9th century.

11.   Ivar – Means “archer” and is of course associated with Ivar the Boneless, a man who certainly overcame the odds.

12.   Leif – Means “descendant” or “beloved” and is also the name of the great explorer Leif Erikson.

13.   Ragnar – Means “army rule” and is of course the name of one of the most famous Vikings of all time Ragnar Lothbrok.

15.   Sigurd – Means “guiding the victory” and is also the name of the legendary hero from the sagas, also sometimes called Sigfried.

16.   Stein – Means “stone or small rock”, which is still a common given name in both Norway and Iceland.

17.   Thorsen – Means “god of thunder” and has become a popular Scandinavian last name.

19.   Ulrik – Means “noble ruler” and is an alternative to the name Horik.

20.   Vidar – Means “the wide-ruling one” and is one of the sons of Odin that may survive the Ragnarok apocalypse.

1.   Aslaug – Means “married to the gods” and is of course the famous daughter of Sigurd, wife of Ragnar, and mother of Bjorn.

2.   Astrid – Means “beautiful goddess” or “divine strength” and this was also the name of the wife of the Norwegian king Tryggve Olafson.

3.   Borghild – Means “defense in battle”, in the Volsunga she was the wife of Sigmund and the personification of mist.

4.   Brenda – Means “sword” and is known to have been the name of the daughter of a Viking overlord in Ireland in the 12th century.

5.   Embla – Means “elm tree” and was the name of the first woman to be created by Odin to become the mother of the human race.

6.   Eydis – Means “good luck” and was first documented in the 9th century and is still popular in Iceland today.

7.   Freya – The name of the goddess of love, fertility, witchcraft, and reportedly the most beautiful women to ever exist.

8.   Gisla – Means “ray of light”, and while this was also the name of the French Duchess that defended Paris against the Vikings, it was also a popular Nordic name.

9.   Gunnhild – Means “battle in war” and is the name of a woman who appeared in the Icelandic sagas and may have lived as an exile in Scotland in the 10th century.

10.   Gyda – Means “god is gorgeous” and was the name of a Swedish princess that married the king of Denmark.

11.   Helga – Means “divine woman” and was the name of a princess of the Kievan Rus in the 10th century who was later sainted.

13.   Ingrid – Means “hero’s daughter” or “beautiful goddess” and is the name of a 12th-century queen that was married four times, to four different kings.

14.   Iona – Means “born on an island” and was also the name of one of the first British abbeys, on the Isle of Mull, to be attached by the Vikings in the 8th century.

15.   Liv – Means “life” and was the name of the woman foretold to survive Ragnarok and repopulate the human world with Livthrasir.

16.   Nanna – Means “courageous” and was also the name of the goddess that was the wife of Balder, and threw herself on his funeral pyre when he died.

17.   Revna – Means “raven” and brings to mind the two ravens of Odin, Huginn (thought) and Muninn (memory) that were his eyes and ears in the world.

18.   Runa – Means “secret love” and also points to the runes which were fundamental to the Viking language and magical system.

19.   Sigrid or Siri – Means “beautiful victorious woman” and was the name of Sigrid Storrada (the haughty), a formidable queen in the Norse sagas.

20.   Thora – Means “like thunder” and this was the name of a mythical character in the sagas, as well as one of the wives of Ragnar.

What’s in a Name?

What do you think, can a name shape a person? What’s your favorite Viking name?

5 thoughts on “The Best Viking Names”