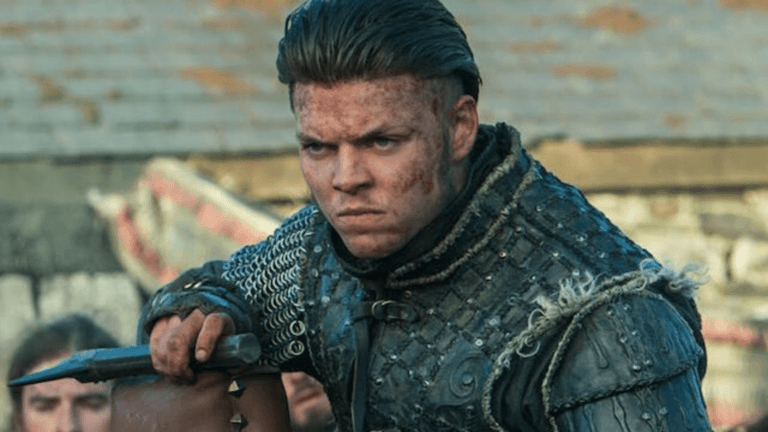 Anyone who has seen the History Channel’s epic show Vikings will be familiar with Ivar the Boneless, Ivar hinn Beinlausi, the brutal but crippled son of Ragnar Lodbrok. A cunning and ruthless tactician, he leads his brothers on an invasion of England in order to avenge the death of his father.

But how likely is this story about a crippled Viking war chief ? Read on as we try and separate fact from fiction.

Who was the real Ivar the Boneless ?

So, who exactly was Ivar the Boneless? He probably was one of the sons of a Danish king Ragnar, though whether this Ragnar was the larger than life figure presented in the sagas is also questionable.

Far from being crippled, Ivar seems to have been both a ferocious warrior and a master tactician. He was one of many Viking warriors that made his way to England, but had more success than others, as he strategized and built up alliances and resources.

But this doesn’t mean that he lost his Viking lust for the raid, and he probably continued to terrorize his neighbors until his death.

To ask how accurate the History Channel’s portrayal of Ivar is begs the question: how accurate is any of the information we have about Ivar? The stories of Ragnar Lodbrok and his sons mainly survive from sagas written in the 13th century, more than 200 years after their deaths These sagas are filled with so many fantastic stories of courage and brutality that it is difficult to believe that they can all belong to just one family.

While contemporary sources, such as the Irish Annals, suggest that a Viking chief named Ivar was active in Britain and Ireland between 853 and 873, whether any of the other stories about him are true, is impossible to know.

According to the sagas, Ivar was one of the sons of Ragnar Lodbrok, a king of Denmark and famous Viking raider, who seems to have had a very potent seed indeed! He had at least nine sons that we know about. There were probably some daughters that didn’t make it into the sagas.

With his first wife Thora, the daughter of the Jarl of Gotland, Ragnar had two sons, Eirik and Agnar.

After Thora died, Ragnar encountered Aslaug while he was raiding the Norwegian coast. According to her legend, she was the daughter of Sigurd, the famous dragon slayer, and Brynhild, the Valkyrie.

However, her parents died shortly after her death and she was adopted by a poor Norwegian family that kept her parentage secret and renamed her Kraka. Despite her ostensibly humble origins, Ragnar fell deeply in love with her and they had several sons together: Ivar, Bjorn Ironside, Halfdan Hvitserk, Rognvald, and Sigurd Snake-in-the-Eye. It is not hard to imagine the family telling this unprovable story about Kraka’s legendary parentage in order to boost the prestige and legitimacy of her sons.

Ragnar also had another son, Fridleif, by the shieldmaiden Lagertha, and a son Ubbe by an unknown woman.

According to the sagas, Aslaug had a vision that if she and Ragnar did not wait three days to consummate their marriage, any child conceived during these three days would be born boneless. But it seems that Ragnar was unable to control his lust, and this Ivar the Boneless was born. But what exactly does it mean to be boneless?

In the television series, Ivar is depicted as crippled from the waist down. This appears to accord with the legends, as Ivar is described as being carried on a shield, and as having incredibly upper body strength, something that someone who needs to use their arms to move might develop.

But the reality is that if Ivar was born crippled, he is highly unlikely to have survived into adulthood. In many cultures, it was common practice to expose babies that were born crippled or deformed, leaving them in the wild to die. In some cultures, it was even common to expose female babies, as families simply didn’t have the resources to care for them. In the case of disabled children, it was generally considered a mercy, as it was unlikely that they could survive the challenging life of a Viking.

So, the fact is, if Ivar was born with a crippling disability, he probably would not have made it into adulthood, one way or another, so the nickname he carries probably refers to something else.

Some scholars have suggested that he was impotent, as he is also described as having no love or lust, and as dying childless. He may also have had very little interest in women, as he never seems to have married. His wife Freydis in the series Vikings is entirely fictional.

Others have suggested that he was born with hyper-flexibility, like a contortionist, which may have made it seem like he didn’t have bones.

Yet others have suggested that his name is a reference to his cruelty and that he was actually called Ivar the Cruel, Ivar Exosus, in Latin. A medieval scribe could easily have misinterpreted this as Ivar without (ex) bone (os).

The fact that he is sometimes described as being carried on a shield should not be given too much weight. Successful Viking warrior leaders were often carried on the shields of their defeated enemies, and it seems that Ivar was a successful leader, due to both his ferocity in battle and his skill as a tactician.

The sources are consistent in their description of Ivar as clever and cunning. They suggest that he was the leader of his brothers by Aslaug, who spent time together as a band of warriors. He led not only because he was the oldest, but also because he was the cleverest.

One passage describes Ivar as large and handsome, but also suggests that he was so wise that it was uncertain whether there had ever been a wiser man than him.

It seems that his father also trusted him thanks to his intelligence, and at some point, Ragnar made Ivar the governor of Jutland in Denmark. While he was serving in this capacity, his half-brother Ubbe hatched a plot to usurp his father.

Wanting to avoid the conflict – and probably not wanting to take sides and wait to see who came out on top – Ivar went into voluntary exile to avoid the situation. This actually earned his father’s respect, who then put him in charge of his entire kingdom as he embarked on an invasion of England.

Further evidence against the likelihood that Ivar was a cripple is the fact that he is often described as a ferocious warrior, particularly adept with the bow and arrow. This quality is well captured in the story of the conflict between the brothers and King Eystein of Sweden.

According to some stories, the sons of Ragnar and Aslaug decided to leave their father’s realm without his permission in order to seek their own glory as warriors. According to others, Ragnar expelled his younger sons from his kingdom, as was the practice, so that they would not conflict with the interests of his older son, in this case, his two sons by Thora. They set themselves up on Zealand, with Ivar as their leader, and made raids on the surrounding Viking territories, including Jutland, Gotland, Oland, and other minor islands.

The pressure that their presence put on the Swedish king led their older brothers, Eirik and Agnar, to go to the king and request his surrender. Instead, they were killed. The gang of brothers swiftly attacked the Swedish king to seek vengeance.

According to the story of the battle, King Eystein was accompanied by a magical cow named Sibilja that he used to wreak havoc on the battlefield. Ivar killed the cow, first striking it in the eye with an enormous bow. This sent the cow berserk, so Ivar had himself thrown at the cow, which he then crushed with his immense strength.

There is also some suggestion that Ivar was a berserker warrior himself, invoking the spirit of the bear before going into battle, making him ferocious and practically unkillable.

Viking Chieftain and invasion of England

Ragnar may have left his son Ivar in charge in Denmark as he went off to conquer England. By this time Ragnar was a renowned warrior, and he also seems to have become arrogant, claiming that he could take England with just two ships. Instead he was captured and killed by King Aella of Northumbria, who apparently threw him into a snake pit.

In order to avenge their father, Ivar and his brothers, including the infamous Ubbe, put together a Great Heathen Army, which included more than 400 ships, and sailed for England.

According to some stories, the sons of Ragnar were still hugely outnumbered when they arrived, so the master tactician Ivar refused to fight. Many of his brothers went into battle anyway, and they suffered a humiliating defeat and withdrew back to their home territory.

Ivar, on the other hand, stayed in England and approached king Aella, presenting himself as a friend, pointing out that he alone among the brothers did not attack the king. Instead, he asked for financial compensation for the death of his father.

King Aella agreed and said that he would give Ivar as much land as he could cover with the biggest hide that he could find. What may have seemed like an insulting offer, Ivar turned into an opportunity. He cut the hide into ribbons and stretched it to an enormous size, carving out a kingdom from himself in England with York as his capital. There, he found allies and gathered resources, eventually inviting his brothers to return and seek vengeance again, this time with a plan.

With Ivar as their leader, the sons of Ragnor defeated Aella’s army and captured the king, whom they tortured to death using a technique known as the blood eagle. This involved carving an eagle into his back and then salting the wound. After this, they extracted his ribs with a sword in such a way that it also pulled out his lungs, eventually killing him.

Most of Ivar’s brothers left England following the death of Aella, returning to their own kingdoms and raiding.

According to some sources, Ivar stayed in England for the rest of his life as a local king, and eventually died there of old age. According to other sources, he left one of his brothers in England in his place and returned to Denmark, where he again died of old age. He seems to have passed at least some time in England, as there are stories of him ruling over his kingdom with a brutal fist.

Christian sources that recount Ivar’s actions make particular note of his killing of King Edmund of East Anglia. Edmund is said to have led an unsuccessful uprising against Ivar. The Viking forces that invaded England were known as the Great Heathen Army for a reason, and apparently Ivar had a particular hatred for followers of the Christian faith. He demanded that the captured Edmund denounce his faith, and when he refused, tortured him to death and left his body exposed. He then sacked a monastery, slaughtered all the monks and took their wealth.

There is also a record of a Viking Ivar as active in Ireland from 853 to 873. This would suggest that Ivar not only left England, but that he was also in Ireland at the time of his father’s death, rather than looking after things in Denmark. One of the reasons it is thought that this Ivar was the son of Ragnar is that he disappears from the sources between 864 to 870, exactly the time that he would have been in England.

According to these stories, Ivar set himself up with a kingdom in Dublin from where he raided coastal settlements, including in Scotland. This Ivar died of a sudden and horrible disease in 873.