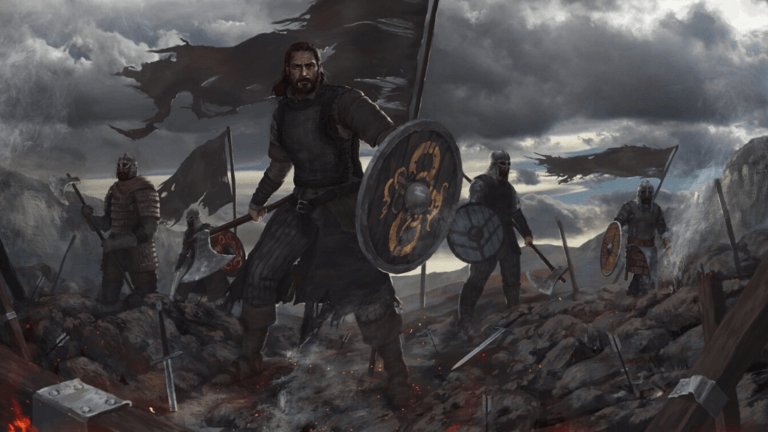 Ragnarok, which means “Fate of the Gods” in Old Norse, is a prophecy about how the world will come to an end and the gods of Norse mythology will meet their doom.

In the story, many of the gods die and the nine worlds of the Norse cosmos held in the branches of Yggdrasil are consumed by fire. But, according to surviving accounts of the prophecy, not everyone will die in this Viking apocalypse.

But who exactly survives Ragnarok? Spoiler alert! Unlike in the Marvel film, it’s not Thor.

The Ragnarok prophecy survives in a number of sources, primarily the Voluspa, which was probably originally written in the 10th century but only survives in later copies, and the Gylfaginning from the Prose Edda, written by Snorri Sturluson in the 13th century.

It is worth noting that the original story in the Voluspa probably ends with the earth sinking into the sea. Later passages about survivors are probably additions, and may draw on Christian ideas.

Sturluson’s account, which also describes a new dawn after the destruction, also probably reflects considerable Christian influence. It is very likely that the earliest versions of the prophecy suggest that utter destruction of everything. The “Disney treatment”, which sees a new dawn for gods and men, is probably a later development to the story.

But before looking at survivors, let’s have a quick look at who actually dies during Ragnarok. The death toll is predicted to be high, not just in terms of numbers, but also the importance of who we lose. This prophecy could have been written by George R.R. Martin, none of your favorite characters are safe from doom.

Ragnarok will be portended by a series of omens, such as a bitterly cold winter that never ends, and mankind’s descent into war. The apocalypse will start in earnest when Skoll and Hati, children of the mighty wolf Fenrir, catch and devour the sun and moon, plunging the world into darkness.

With this, the great tree Yggdrasil, which holds the nine worlds of Norse mythology together, will shudder, causing massive earthquakes that split open the domes that keep the different worlds shut. This is what allows the fire giants to emerge from Muspelheim, the world of fire, and the dead to leave Helheim.

Loki, who was chained up by the gods for his role in the death of Balder, will break his shackles and gain his freedom. He will travel to Helheim, where he will join forces with his daughter Hel and lead an army of the dead against Asgard.

His son the Wolf Fenrir will also break is Aesir chains and runs through the world, devouring everything before him. Loki’s other son Jormungandr, the Midgard Serpent, will emerge from the sea and begin to spew his venom into the air, poisoning everything.

So, who gets a death scene in the prophecy?

Odin, the king of the Aesir gods and the god of war will lead his own army of honorable dead warriors into battle. But he will be devoured by the mighty wolf Fenrir, seeking vengeance for his incarceration. Fenrir will, in turn, be killed in vengeance by Odin’s son Vidar.

Thor, the god of thunder and great protector of both Asgard and the realm of men, also dies. He faces off against Jormungandr, and although he will slay the serpent with his hammer, this is not before it has spewed so much of its venom into the world and over Thor that the god dies within seconds of the beast.

Freyr, one of the Vanir gods that live in Asgard as part of the peace treaty between the Aesir and the Vanir, will die at the hands of Surtr, a giant wielding a burning sword that emerges from Muspelheim and sets the cosmos aflame. According to some readings of the text, Freyr will also slay the giant.

Heimdall and Loki, Tyr and Garm, will blow his horn Gjallarhorn to warn the gods that Loki is approaching with his army of the dead. After this, he and Loki will fight to the death, each slaying the other. Garm, the guard dog of Helheim, will also fight to the death with the god Tyr. You should take a look on our full story of Tyr.

All other life in the Norse cosmos will also pretty much be destroyed. According to the Voluspa, the sun turns black, the earth sinks into the sea, from which steam rises as the flames touch the heavens. This suggests a bad end for all the inhabitants of the cosmos, man, dwarf, and elf.

But then… according to probable later additions to the Voluspa, the earth rises from the sea and the surviving Aesir gods meet at the field of Idavollr and begin to rebuild the world.

Who are among the survivors?

Magni and Modi, sons of Thor

Magni and Modi, the sons of Thor, survive and inherit Thor’s hammer Mjolnir. It is important to remember that as well as being a weapon, that hammer was used to sanctify important events such as births, marriages, and coronations, so it would have been a vital tool for rebuilding the world.

They were also joined by Vidar, the son of Odin that killed Fenrir. The presence of the sons of the most important gods is probably significant. The Vikings believed that parts of the soul stayed within the family and lived on within descendants, and therefore it would be fitting that it was the sons of Odin and Thor that would pick up their mantle.

Before Ragnarok, Loki tricked Hod into killing his brother Balder, both of whom were sons of Odin. Hod was then executed for his role in his brother’s death. While the gods tried everything to have Balder returned to them from Helheim, the rules of the cosmos could not be broken, and he remained there.

Only with the destruction of the cosmos could the brothers emerge from Helheim, and join the other gods in rebuilding the world. Balder seems to have been more forgiving than the other gods of Hod’s unwitting role in his death.

Hoenir is a little known Aesir god who is elsewhere described as helping Odin to create mankind. He must survive Ragnarok because he is described as casting the divination shards in the aftermath of the destruction. It is likely that his experience of creation would be considered vital in rebuilding the world.

Njord, the father of Freyr and Freya and another Vanir god that lived among the Aesir after the truce between the two tribes, also seems to survive. He is described as returning to Vanaheim, the home of the Vanir. Whether he encountered any other survivors there is unstated.

While Sol, the goddess of the sun, is devoured by a wolf, her daughter appears to survive in order to take up her mantle.

While Hoenir may be able to make mankind anew with the help of the other Aesir, we won’t have to as two humans, Lif and Lifthrasir, survive the apocalypse by hiding in a wood called Hoddmimis Holt. They are destined to become a new “Adam and Eve” and repopulate the world.

But what happens to everyone else? When looking at who dies and who survives Ragnarok, one of the most interesting things is what is not said. With the exception of the goddess Sol, whose disappearance is vital to the story, we are not told what happens to any of the female goddesses.

What happens to beloved Freya, and fearsome Hel, who we know traveled to Asgard with Loki? We even know what happened to her (male) dog, but not the woman herself. What of Odin’s wife Frigg and Thor’s wife Sif? What of Sigyn, the Aesir wife of Loki who had to watch the Aesir imprison her husband and kill their two sons? Did she survive, and which side did she fight on during the great battle?

This is a reminder that histories and legends are written by someone, who cannot help but insert their own opinions, values, and preoccupations into their texts. It is a sad truth that the vast majority of historic authors were male, and that they were not overly concerned with women, even the divine ones. As a result, their stories remain largely a mystery.

What do you think of the records of Ragnarok? Is the new dawn for gods and men a Viking tradition or a Christianising addition? And what about the fates of the women of the world?