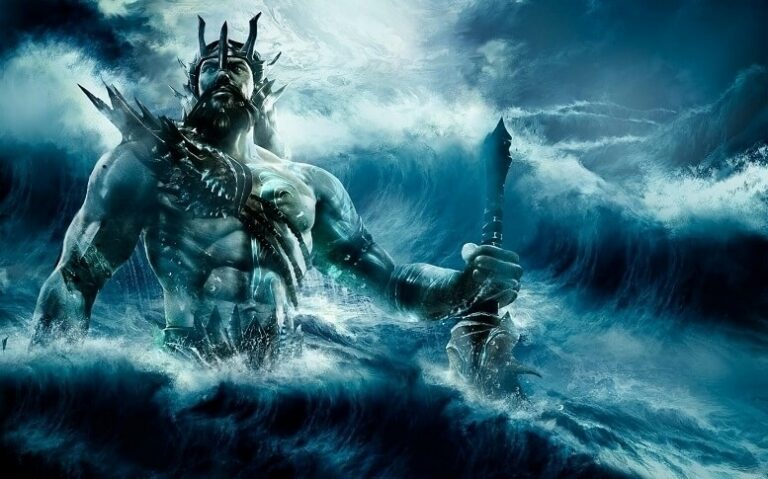 As a seafaring people, we would expect the Vikings to venerate gods of the sea and the wind. Indeed, Thor himself was, among other things, a god of storms and weather.

But the primary god of the sea and winds in Norse mythology was the lesser known deity Njord. A complex and multifaceted god like all the Norse deities, as well as being a god of seafaring, Njord was also a god of wealth.

Perhaps it is not surprising that the Vikings associated wealth with the sea, since much of their wealth was gained from sea raids.

Njord, njörðr (pronounced nyord) is not in fact an Aesir god, but one of the Vanir gods. The Vanir are a second race of gods that warred with the Aesir in the distant past.

The war was largely caused by the Aesir’s disapproval of elements of Vanir culture, such as the practice of incest.

When the war between the two races ended, Njord was one of the three Vanir gods, alongside Freyr and Freya, sent to live among the Aesir as hostages. All three quickly became trusted members of the Asgard community.

Odin even made Njord and Freya the priests of sacrifices in Asgard.

Njord was the god of wind, seafarers, coasts and inland waters. He was also associated with crop fertility, fishing and wealth.

He was invoked by the Vikings before setting out on sea voyages, but also hunting and fishing expeditions.

He was believed to have the ability to calm waters and quell fires. Njord is described as being extremely wealthy and prosperous, and able to grant wealth in the form of land and valuables to those who invoke his aid.

Njord was the twin brother of Nerthus, who was also his wife before he was sent to Asgard. With Nerthus he had two children, the twins Freyr and Freya.

These twins were also married, but when they were sent to Asgard along with their father, Odin annulled their marriage as unnatural.

Njord’s marriage to his twin sister was also annulled, and he went on to marry the giantess Skadi.

Skadi was the daughter of the giant Thjazi, who famously kidnapped Idun from Asgard.

Idun was the goddess responsible for caring for the fruits eaten by the gods that enabled them to retain their youth and vigour.

Loki, who also assisted Thjazi in kidnaping Idun, also eventually rescued her, with Thjazi giving chase. When Thjazi did not return, Skadi assumed that he must be dead and swore vengeance.

To seek her revenge Skadi travelled to Asgard, where the gods offered her gold to compensate her for her father’s death.

Skadi said that she would only settle for the husband of her choice from among the gods.

The gods agreed, on the condition that she chose her husband only by looking at his feet.

She chose the feet that she considered to be most beautiful, assuming them to belong to Balder, son of Odin and the most beautiful of the Norse gods.

But the feet were in fact those of Njord. Skadi was horrified by the realisation as Njord’s face was worn by the sea and he smelled of salt.

Their union did not last long as they could not agree on where to live. Njord considered Skadi’s home in the land of the giants too cold and desolate.

Skadi did not like the noise and activity of Njord’s home, a house on the seashore of Asgard called Noatun, which means ship haven.

Each could only tolerate the home of the other for nine nights, and so went their separate ways.

Later Skadi had a relationship with Odin, with whom she had many children.

Njord is one of the few Norse gods that is said to survive Ragnarok, the Norse apocalypse, according to the Poetic Edda. It suggests that he will return to the Vanir during the final battle where he will survive.

While Njord is not often mentioned in the surviving literary sources for Norse mythology, it is clear that he was one of the most venerated of the Norse gods.

According to the Poetic Edda Njord was rich in temples in Viking times. This is probably why his name is preserved in so many Scandinavian place names in Sweden, Norway and Iceland. These may have originally been the locations of his temples.

Later, Njord was one of three deities involved in the 14th century Icelandic legal oath, sworn on a temple ring, along with Freyr and Ass (probably a name for Odin or Thor).

He was still venerated in the 18th and 19th centuries as part of Norwegian folk practices in which Njord was thanked for a bountiful catch of fish.

The prevalence of the cult of Njord in Scandinavia is also attested by accounts of its denunciation by an eleventh century Christian convert who describes himself as forsaking the folly of Njord in favour of Christ.

God of Sea and Wind

In his role as a sea god, Njord appears to be a helper and supporter of men.

This is in stark contrast to Aegir, a Norse giant also associated with the sea. He was considered a more dangerous being, and if the Vikings saw great waves approaching their ships, they would fear that Aegir was nearby, and perhaps invoke Njord to counter Aegir’s more destructive force.

Unlike Njord, who was a giver of wealth, Aegir was a taker. He was thought to cruelly smash ships in order to take their gold and treasure for himself.

Like Njord, Aegir was married to his sister Ran, with whom he had nine daughters, which were the spirits of the waves. Ran was also seen as a hostile force in the sea, dragging people down into the ocean with her huge fishing nets.

Thus, it seems that while Aegir and Ran represented the dangerous and destructive side of the sea, it was Njord who embodied the power of the sea to give and provide.