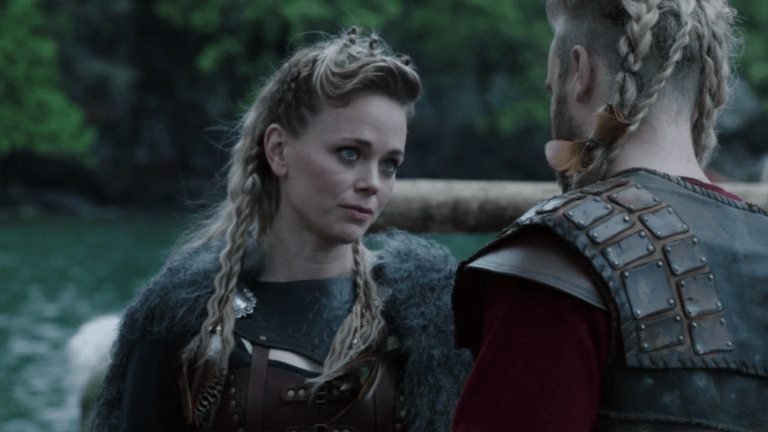 It was not just Viking men, but also Viking women, that were known and feared as ferocious warriors. Of all the Viking shield maidens whose stories have been preserved, Freydis is probably the most ferocious.

The daughter of Erik the Red, she travelled to Vinland in the Americas where she terrified the natives. She was also ruthless in her dealings with her own people, which earned her a reputation as a betrayer.

But, who exactly was Freydis?

Freydis was one of the children of Erik the Red, the man who led the colonization of Greenland. Erik the Red is known to have been very hot tempered.

He was exiled from Iceland for killing a fellow Viking without sufficient provocation. But this seems only to have been the ‘last straw’ when it came to his behaviour.

His fellow Vikings considered him too volatile and unpredictable to keep around.

He was also unable to live in Norway as the result of a similar murder, either committed by himself or one of his sons. This exile is what led him to head for the then uninhabited Greenland, and start his own settlement. No one else would have him.

Born in around AD 970, the name of Freydis’ mother is unknown, and she was probably illegitimate. Nevertheless, she still seems to have grown up with her father and brothers, Thorvald, Thorstein, and the famous explorer Leif Erikson.

She was also married to a man named Torvald, but he is not painted in a very flattering light in the sources. He is presented as a bit of a weakling, especially in comparison to his ferocious wife.

Freydis’ exploits are mentioned in the Greenland Saga and the Saga or Erik the Red. It is clear from these stories that Freydis inherited her father’s volatile temperament. In both she is described as brave but hot tempered, but in one story she is also ruthless and not to be trusted.

Terrifying the Natives of Vinland

Freydis is most well-known for following in the footsteps of her explorer brother Leif Erikson and making her way to the new world. In AD 1001, Leif landed in modern day Newfoundland in Canada, which he called Vinland due to his discovery of grapes.

After exploring the area, he returned to Greenland to tell others what he found. A few other Vikings then followed in Leif’s footsteps and visited the new world, but only very few. Freydis, however, was among them, first joining the expedition of Thorfinn Karlsefni in AD 1004.

Unlike her brother, who seems to have landed in the Americas as a peaceful explorer, Freydis found herself engaged in conflict with the Native Americans. It is said that it arose as a result of failed trading attempts with the locals, that the Vikings called Skraelings. However, considering Freydis’ temperament, it is not hard to believe that her actions may have precipitated the conflict.

According to the saga, following their failed attempt at trade, the Native Americans attacked the Viking camp at night. They probably used some kind of catapult, as they are described as attacking with rods that made unusual sounds.

These were weapons that the Viking had never seen before and caused most of them to flee in panic. According to the legend, only Freydis, who was eight months pregnant at the time, had the courage to stay behind and fight. Facing the enemy alone, the odds were against her.

She grabbed a sword and started beating her bare chest with it and screaming bloody murder, all why eight months pregnant. It is said that the locals were so startled and terrified by the sight that they fled.

Thorfinn Karlsefni’s expedition returned to Greenland not long after the raid on their camp. But Freydis was disappointed with their failure, and determined to replicate the successes of not only her brother Leif, but of the successful voyages that her other brothers had also made to Vinland. She was not done with the new world.

Determined to strike on her own, but needing support, Freydis convinced two Icelandic brothers, Helgi and Finnbogi, to partners in a private expedition with her.

They were to share the expense, both the brothers and Freydis bring the same number of men, and share the spoils 50-50. Freydis also organized with her brother Leif to use the houses and other infrastructure that he had established in Vinland, giving them a foothold in the territory.

Right from the start. Freydis broke her word. She set out after the brothers in order to be able to bring more men with her than she had agreed, giving her the upper hand when they arrived.

Upon arrival, the brothers had already set up camp in the houses of Leif. Freydis immediately expelled them with her superior manpower, and claiming that she had first claim on the homes as the sister of Leif.

Despite this, Freydis and the brothers managed to cooperate in their trading and pillaging operations. No doubt being alone in a strange land far from home gave both sides the motivation to work together. But Freydis was not done with her betrayal.

Shortly before the expedition was set to return to Europe, Freydis beat herself to make it appear that the brothers had mistreated her. She then went to her husband, who had accompanied her on the expedition, and demand that he and their men slaughtered the Icelandic brothers.

It seems that Torvald was reluctant, and so Freydis threatened to divorce him if he did not avenge her.

Torvald did lead the men to kill the Icelandic party, but left five women who were also in the camp alive. Furious, and not wanting any witnesses left alive to tell other what had happened, in a blind rage Freydis killed the five women herself. She also threatened all of her own men not to tell anyone what had happened, or that they would suffer the same fate.

When they returned to Greenland, knowing his sister, Leif Erikson, then chieftain of Greenland, was suspicious of the story told. He tortured three of Freydis’ men until they revealed the truth of her betrayal.

Although Leif was angry with his sister, he did not punish her due to their bond of family loyalty. However, he did predict that nothing good would come for Freydis or her descendants.

The Fate of Freydis

We cannot be sure if Leif Erikson was right in his prediction that fate would not be kind of Freydis and her descendants, as they are not mentioned elsewhere in the sources. Perhaps this in itself as evidence of his prophecy coming true, as what worse fate is there than to be forgotten.

Of course, it must be remembered that the sagas were written by men, who have often demonstrated suspicion of strong women who broke archetypes and took on masculine roles. If the same acts had been committed by her Viking brothers, how would they have been recorded?

What do you think of Freydis? Was she a vicious, malicious woman whose deeds can be described as evil, or is she a misunderstood soul who was just trying to make a life for herself in the challenging world of the Vikings?