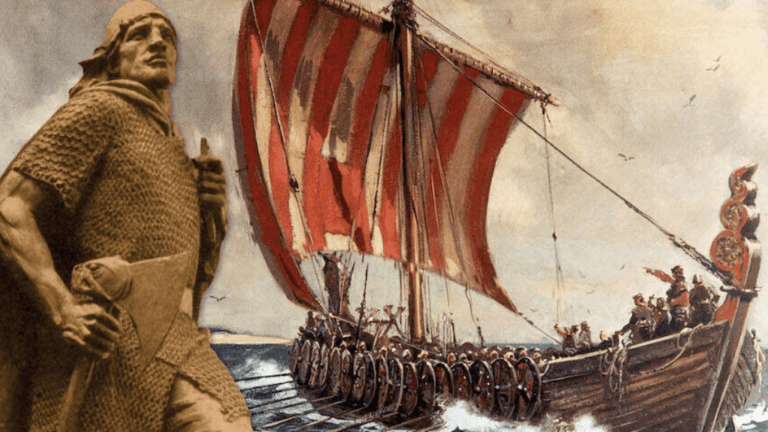 If you know much about Viking history, you have probably come across the name Leif Ericson, the icelandic explorer.

A son of Erik the Red, he was more than you typical Viking warrior.

Leif Ericson was the 1st Viking explorer that visited North America, and also the man that brought Christianity to Greenland. With such an important legacy, it is worth spending some time getting to know Leif Erikson a little better.

Who is Leif Erikson?

The story of Leif Ericson is recorded in a number of the surviving sagas, but each tells different and often conflicting stories. This makes his life a bit of a puzzle to put together.

He was certainly the son of Erik the Red, hence the name Erikson, and was born sometime between AD 970 and 980. He was the second of the chief’s three sons, the other two being named Thorvaldr and Thorsteinn, he also has a sister Freydis.

Thorvaldr must have been quite a bit older than Leif, because it was a result of Thorvaldr killing a fellow Viking that he was exiled from Norway, and his father Erik accompanied his son to Iceland, where it is presumed that Leif was born.

There the raising of Leif was largely handed over to Thyrker, a German thrall – a kind of household slave – of Erik. Thyrker is credited as being responsible for Leif’s education, teaching him to read and write, to speak Celtic and Russian, to use weapons and so forth. The two would remain close throughout Leif’s life, and it seems that Thyrker accompanied Leif on most of his journeys.

While Leif was still a young man, probably around the age of 12, his own father got into a fight with another Viking on Iceland, killing him. For this reason, he was banished from Iceland. Still unable to return to Norway, he decided to look for rumoured lands in the west. He sailed off with his family and found Greenland. He established himself there and was soon joined by other Viking settlers to create a thriving community.

The Voyage to Vinland

Leif is most well-known for being the first European to discover the Americas. However, this description is a little misleading. According to one story, Leif heard about the Americas from a sailor called Bjarni Hergelfson, who came across the land by accident when he was trying to make it to Greenland.

He said that he knew that he had sailed off course when he arrived at a land that was lush and green, rather than ice covered. As they were keen to make it to Greenland they did not go to shore.

Leif probably heard his story as a young man, maybe around 16 years old, but does not seem to have decided to set off in search of the land for several years, only eventually making landfall in the Americas in AD 1001.

According to the account, Leif first came across several pretty inhospitable lands before finding the lush, green land that Bjarni described. He is thought to have stumbled across Baffin Island and coastal regions of Canada before finally landing at a rich lane with green pastures, dense forests and huge Salmon. This is where Leif and his followers set up camp and began to explore.

Leif named the area Vinland after his friend Thyrker went missing for a few days only to return ranting that he had found grapes. Vinland, of course, means Wineland. Vinland is thought to be modern day Newfoundland. Not only does the area match Leif’s description, but in the 1960s, archaeologists found the ruins of a Viking-style settlement at L’Anse aux Meadows in the area.

After spending a season in Vinland, Leif and his crew headed back to Iceland. It seems that few people decided to make the journey and follow in Leif’s footsteps, with the exception of his sister Freydis, but the majority of her followers were killed by natives.

As well as discovering the new world, Leif has a significant impact on the old, as he is credited with converting the Vikings of Greenland to Christianity.

It started when his father sent Leif to take some gifts to King Olaf of Norway. As a side, on the way to Norway, Leif got blown off course and found himself in the Hebrides.

Bad weather forced him to stay there for a month in the house of the local chief. There he also struck up a relationship with the daughter of the chief, Thorgunna, who was also thought to be a witch. Although the two never married, she did bear him a son, Thorgils, who was later sent to live with his father in Greenland.

When Leif did eventually make his way to Norway, he quickly struck up a friendship with King Olaf, who invited him to stay with him in Norway for a while. King Olaf has already converted to Christianity, and while Leif was there, King Olaf managed to convert him as well and have him baptised into the faith.

When Leif returned to Greenland, he brought a priest from Norway with him to spread word of the faith. While he was unable to convert his father Erik the Red, who was staunch in his commitment to the Norse gods, he did convert his mother Thjodhild. The first church constructed in Greenland is named after her.

Presumably, after his father’s death when Leif himself became the chief of Greenland he had no problems spreading the world of his new religion. Leif himself was not followed to power by his son Thorgils, but rather another, presumably legitimate son, by an unknown woman called Thorkel Leifsson.

Leif’s characterisation as the first European to discover the Americas has made him a bit of a symbol among modern day Nordic Americans.

Netflix has recently announced that it will create a sequel to the popular show Vikings, called Vikings: Valhalla, which will be set 100 years after the end of the original series, so the time of Leif Erikson. We can’t wait to see how he is portrayed and how his story will be told.