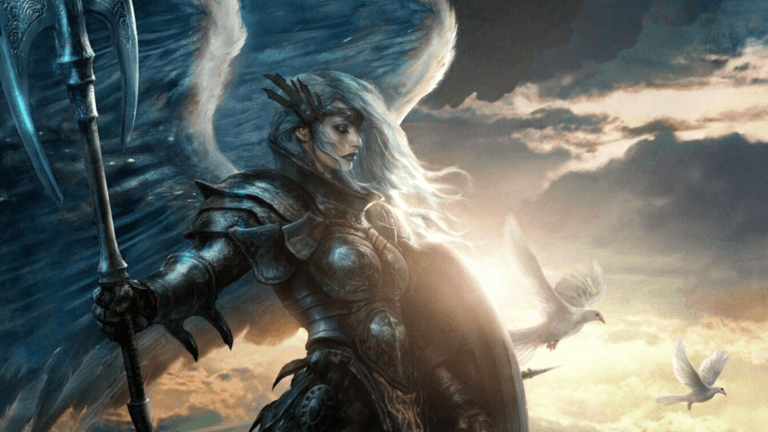 The Valkyries are some of the most well-known and ferocious women from our Viking past.

Sometimes called Walachuria, they were servants of Odin whose principal role was to select brave fallen warriors and take them to dwell in Valhalla.

But what do we really know about the Valkyries as a group of divine shield maidens, and who are the most famous Valkyries from the Norse sagas?

Who were the Valkyries?

In Old Norse, the world Valkyrie means “chooser of the slain”, which describes their role in the universe of Norse mythology. They were servants of Odin that would swoop over the battlefield and choose half of the fallen warriors to take the Valhalla.

This was the hall of Odin in Asgard, where Viking warriors that died bravely in battle, known as Einherjar, were taken. There they trained and feasted, preparing to fight alongside Odin in the final battle of the apocalypse at Ragnarok.

The Valkyries are described as warrior women. They descend from the sky on horses and garbed in the feathers of swans that allow them to fly. They also wear sturdy iron chain mail that fell to their knees and helmets, just like any male warrior.

They carried brightly shining spears, also the preferred weapon of Odin, and may have appeared drenched in blood. They would also make guttural battle cries as they flew over the battlefield, which struck both awe and terror into the hearts of mortal warriors.

As a result of their role in picking over the dead on the battlefield, they were also sometimes represented by carrion-eating ravens.

But as women, they were not exempt from traditional female roles. They are also described as serving mead and ale to Odin and the Einherjar from drinking horns in Valhalla.

Names of the Valkyries

It is unclear how many Valkyries there were, but they seem to have been a limited and elite force. They were all named in relation to war and weapons, highlighting their intimate connection with war.

In the Voluspa, the prophetess volva names six Valkyries:

In the Grimnismal Odin names more Valkyries as he wishes that two would bring him a drinking horn, and lists a further eleven Valkyries that serve drinks to the fallen warriors in Valhalla.

Several other individual Valkyries are named in different stories. For example, in the Helgakvida Hjorvardssonar the son of the king of Norway is described as seeing nine Valkyries passing by as he sits on a burial mound. One is called Svava, which means “woman from Swabia”, who was also apparently the daughter of King Eylimi.

This is just one of many examples in which Valkyries, mythological servants of Odin, are conflated with shield maidens, mortal female warriors, usually of aristocratic descent, as only wealthy and powerful women would have had the liberty to play a significant role in battle. This is probably the result of Christianising influences, which saw important figures from myth interpreted as historical ancestors. For example, in such Christianising sources, Thor was associated with King Olaf II of Norway, making him an important figure from history, rather than a god.

Brynhild, The Most Famous Valkyrie

The most famous individual Valkyrie known from Norse mythology is Brynhild, whose story is primarily recorded in the Volsunga. Her story reveals a lot of specific beliefs that may have been associated with the Valkyries.

One of the servants of Odin, she angered the god when she struck down the wrong king in a battle. This suggests that the Vikings believed that as well as collecting the dead, the Valkyries, at the behest of Odin, the god of war, could intervene and dictate the course of battles.

Brynhild accepts her punishment, but says that she will only marry the bravest of men that knows no fear. She therefore imprisoners herself on a mountain within a ring of fire sleeping, and waits for a man brave enough to come and claim her.

The famous and brave warrior Sigurd, having killed the dragon Fafnir, passes through the ring of fire and awakens the sleeping Brynhild. But this is no Disney fairy tale. The pair do not live happily ever at this point. Sigurd decides that he still has too much to do and leaves Brynhild there with the promise to return. She says that she will wait for him, and will only marry the man brave enough to pass through the fire.

But while Sigurd is away, he is magically given amnesia and forgets all about Brynhild and finds himself engaged to another woman, Gudrun, who may also have been a Valkyrie. Nevertheless, Sigurd unwittingly returns to the ring of fire for a second time. Unable to claim Brynhild for himself, he magically takes the face of his friend Gunnar, who is too scared to pass through the fire, to win the Valkyrie. Brynhild, still in love with Sigurd, is unwilling to marry Gunnar, but must keep her word. So, she travels to the castle of Gunnar where she marries him, Sigurd and Gunnard having magically swapped faces again.

When Brynhild learns of the deception, she seeks her vengeance and tricks her husband Gunnar into orchestrating the death of Sigurd. But her love for Sigurd means that this breaks her heart, and she decides to kill herself by joining Sigurd on his funeral pyre. She also manages to have the three-year-old son of Sigurd with his wife Gudrun, Sigmund, killed and placed on the pyre.

The story of Brynhild’s vengeance highlights both the jealous nature that is seen in man stories of the Valkyrie, and their capacity to love. She is not the only Valkyrie that is described as dying of a broken heart.

According to some legends, the first time Brynhild and Sigurd met, before he lost his memory, they already made love and Brynhild became pregnant with Aslaug. Unable to keep the girl and marry Gunnar, she gave her away. Aslaug then went on to marry Ragnar Lothbrok and was the mother of Bjorn Ironside and Ivar the Boneless.

Ladies of the War Lord