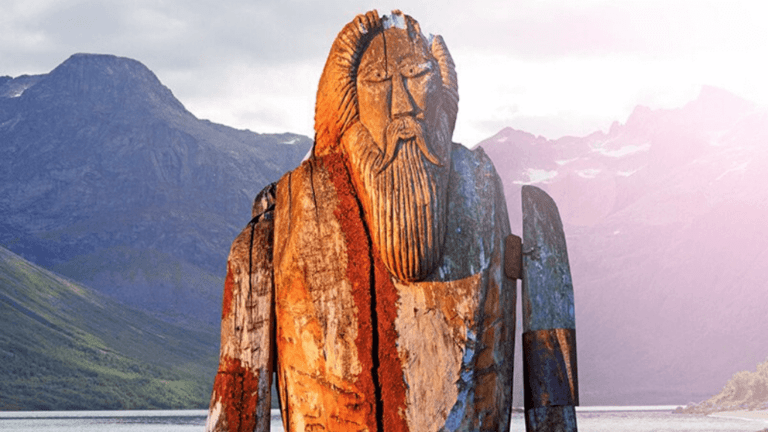 We are all familiar with the stories of Thor, and have heard rumors of human sacrifices, but what was the Viking religion really like?

The pagan beliefs of the Old Norse religion are difficult to decipher, as they are not recorded anywhere. Old Nordic religion was a folk religion that was passed down via word of mouth.

We must put it together like a puzzle from the few hints that survive in written sources and the archaeological record. But read on to find out what we do know about the enigmatic religion that made sense within the warrior world of the Vikings.

We often talk about Old Norse religion like it was something uniform that all the Vikings shared, but this is far from the case. It was nothing like, for example, Catholicism, where there is a central body that largely dictates and unifies beliefs and practices.

Before encountering Christianity, the Vikings didn’t even have a word for this type of organized religion.

Old Nordic religion is better described as a folk religion. It was something that was practiced as part of everyday life, with children learning practices from their parents and neighbors, and also borrowing from other people that they encountered.

Cities and armies also had their practices, but what they did was not written down in any rule book. It varied from place to place and group to group and was developed from custom.

The closest word in Old Norse for religion is Seidr, which means custom. When they encountered Christianity as a religion, they called it nyr seidr, new custom, and then adopted the term forn seidr, ancient custom, for their own beliefs.

What unified Old Norse religion was the mythology on which it was based.

These stories describe a world that looks very different from our own. The cosmos is composed of nine worlds, each of which is tucked into the roots and branches of Yggdrasil, the tree of life.

The Vikings venerated the gods of Asgard, who were led by Odin, who also created the universe, including mankind. He was the progenitor of most of the gods, and so was called the All-father. Odin was the god of war, wisdom, and kingship, reflecting the things that were important to the Vikings.

They were a warrior people that lived by conquest, but they also valued intelligence. It was their superior weapons and tactics that allowed them to dominate Europe for hundreds of years.

They also venerated kingship, which at its core was a strong leader that could unite warriors to protect their homes and gain riches through raids. Unlike modern-day states, there was no question of there being a single Viking king. A man was the king of what he could control.

While Odin was the central figure in Viking religion, Thor was the most popular. The son of Odin, he was the god of thunder and the protector of mankind. He used his mighty hammer Mjolnir to hold back the forces of chaos and destruction, embodied by the giants. Lightning and thunder were caused when he smashed giants with his hammer.

This also made Thor a weather god, which made him vitally important to sailors, and also a fertility deity, connected to the harvest. His importance is highlighted by the fact that he was also tied to the things that made society work.

The Vikings believed that Thor’s hammer was also used to hallow important events such as marriages, births and deaths. These usually brought with them new alliances and new social structures, which needed to be accepted by all. This was the purpose of hallowing.

While there were many other deities that the Vikings knew about and venerated, the next most popular was Freya, a goddess of love and beauty, but mostly venerated because she was a fertility goddess, for both women and the land.

Importantly, Freya was not one of the race of Aesir gods that descended from Odin. She was in fact from another race of gods, the Vanir. She was sent to love in Asgard with the Aesir after the Aesir-Vanir war, as a hostage. But this was not a problem for the Vikings. They did not worship a particular line of gods for dogmatic reasons. They venerated the beings that they thought could help them and make a difference in their lives.

We know a lot less about Old Norse rituals related to their religion than we do about their mythology.

The Vikings themselves never recorded the details of their ritual activity, as this was everyday practice taught by parents to their children, alongside activities such as cooking and caring for animals.

Some Christian sources provide information on rituals, but these records were often written with the explicit purpose of casting Norse paganism in a negative light.

What we do know from the sagas is that blood sacrifices of animals to the gods and feasting were common practice, as they were in other pagan religions, for example, the religion of ancient Rome.

The Vikings do not appear to have needed a special priest to conduct these rituals. They were usually led by the highest status person at the gathering. There are words for priest in Old Norse, gothi for men and gydja for women. But these seem to have been titles that they adopted while they were completing that task. Individuals were not priests all of the time.

Viking religion also had magic practitioners. The Vikings believed that human beings could learn to practice magic, which was also practiced by the gods. Freya was considered to be a master sorceress, and she taught the skill to Odin. The Vikings believed that the runes, their alphabet, were a potent tool for that magic. In the sagas, we often hear of heroes using the runes to cure illness or debilitate an enemy.

The female practitioners of this magic were known as Volva, and the men Seidmadr, though the art was considered a feminine one and female practitioners were more accepted than their male counterparts. Their practice primarily focussed on divination and the interpretation of omens.

Something else that marks out Old Norse religion was a shared belief in the afterlife, and that individual life continued in some form after death.

The most well-known afterlife belief among the Vikings is Valhalla. This was a hall of Odin in Asgard. The Vikings believed that warriors who died bravely in battles would be taken by the Valkyries to live in Valhalla.

There they would feast and live in warrior paradise until they were called onto fight again in the final battle of Ragnarok, the Viking apocalypse.

Those who did not die in battle would find themselves in a variety of different afterlives, some of which resembled life in Midgard, and some of which were quite different.

The most well-known of these was Helheim, a place which seems to resemble the Christian version of Hell, though it was not only the wicked that would find themselves there. However, it is worth noting that we only know of Helheim from Christian sources, and that their descriptions of it are likely highly influenced by Christian ideas.

The idea of Ragnarok reflects the Viking belief in fate. The Vikings believed that the fate of all men was already written. They had their own version of the fates, the Norns, which wrote the fate of men into the bark of Yggdrasil using the runes.

But the Ragnarok prophecy shows that the gods also had an inescapable fate. Odin hears the prophecy from a Volva, who described to him the end of the world and the deaths of the gods.

The widespread practice of the Old Norse religion came to an end in the same way as many religions across Europe, with the spread of Christianity.

The Vikings began to have contact with Christians from the early 8th century. Then, Christians were not supposed to trade with pagans, and believed that Vikings had to undergo some kind of conversion in order to be trading partners.

This led to many conversions in name, but true conversions followed with time. The first Viking king known to have been seriously baptized was Harald Bluetooth of Denmark in around 950.

But there is no firm date for when the Vikings adopted Christianity. In the archaeological record, we see Christian crosses and Thor hammer amulets being produced and worn at the same time. In churches that were built as late as the 12th century, we see Old Norse and Christian imagery mixed together. But with time, Christianity emerged as the successor, and Old Norse practices were abandoned, absorbed into Christianity, or practiced only in private.

In the 1970s, popular interest in the religion grew significantly, and Asatru was established in Iceland as the term for referring to people who believe in the Old Norse gods and base their spiritual practices on Norse mythology, just like the Vikings did.

It is an official term used on the census in Iceland, but it is also used less formally around the world.

What do you think of modern-day Asatru? How does it compare to the Old Norse religion of the Vikings?