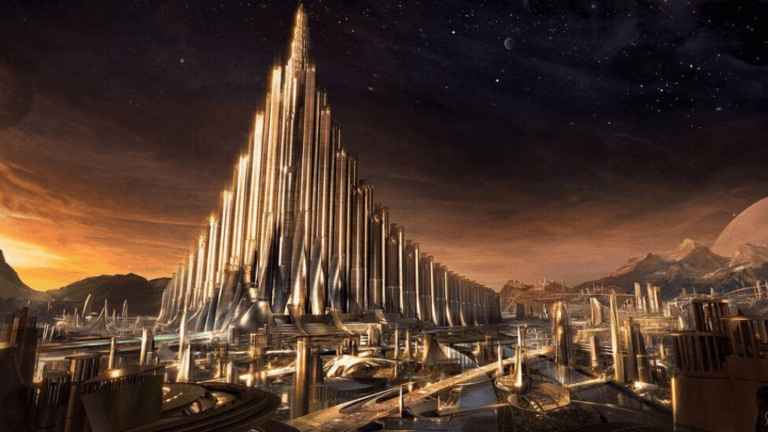 According to Norse mythology, the cosmos is composed of nine discreet worlds, all of which are held together and connected by Yggdrasil, the Tree of Life. Chief among these worlds, and situated high above the others in the heavens, is Asgard.

This is the realm of the Aesir gods, the principal gods in Norse mythology. Here, each of the important Asgardians has their hall, and it is also the location of Valhalla, the warrior afterlife.

Asgard sounds like an idyll, but what do we really know about this heavenly world?

At the center of the Norse cosmos was Yggdrasil, the Tree of Life, an enormous, ever-green ash tree that cradles the nine realms of Norse mythology in its roots and branches.

The realms are divided across three levels. On the top level, in the highest branches of the tree, is Asgard, the realm of the Aesir gods. However, despite being located in the heights of the tree, Asgard is also said to contain one of the three wells that feed the roots of the Yggdrasil, Urdarbrunnr, also known as the Well of Destiny.

The Norns, the Norse fates, dwell by the lake as the write the destiny of men into the bark of the Tree of Life with the sacred runes.

In the middle level, we find three realms. The first is Midgard, the world of men. It is surrounded by a giant ocean that makes it inaccessible from the other realms, except for Asgard, to which it is linked via the Bifrost bridge.

Here is also Alfheim, the home of the light elves, beautiful creatures that shine more brightly than the sun and may have been considered similar to angels. Finally, on this level is Muspelheim, the primordial world of fire, and home of the fire giants.

On the lower level, among the roots of Yggdrasil, we find a further five realms. First is Vanaheim, the home of the Vanir gods, the lesser-known gods of Norse mythology that are masters of sorcery and magic. Second is Svartalfheim, which means the dark fields, and is home to the dwarves, the great artisans and smiths of the Norse cosmos that prefer to live underground.

Next is Niflheim, a land of ice and mist inhabited by the ice giants. Among the roots of the Norse universe is also Jotunheim, the home of the giants, known as Jotuns, the mortal enemies, and also frequent lovers, of the Aesir gods. Finally, there is Helheim, the realm of the dead that do not find themselves among the fallen warriors in Valhalla. It is ruled over by the giantess Hel, the daughter of Loki.

The Enclosure of the Aesir

In old Norse, Asgard means “enclosure of the Aesir”, a name that perfectly summarises the realm. It was the dwelling place of the Aesir gods, and it was surrounded by a great, but incomplete, wall.

The wall was constructed near the beginning of time, but after the conclusion of the Aesir-Vanir war. These two races of gods fought because the Aesir did not approve of the Vanir way of life, which they considered immoral, as it included practices such as incest.

Nevertheless, these cousins managed to end their war, and Vanir hostages were sent to live in Asgard among the Aesir. These included Njord, the god of sailing, and his two children, Freyr and Freya. Freya, a goddess of love, is a particular beauty, and in many stories, giants seek her hand in marriage.

Having concluded their war, the Aesir were looking to fortify their home against the threat of the giants. Hearing of their need, a builder came to Asgard and offered to build their wall, in return for the hand of Freya in marriage, as well as the sun and the moon. Understandably, the Aesir were unwilling to pay such a high price.

By this time, Loki had already taken up residence in Asgard. He made some kind of blood brother agreement with Odin which allowed him to stay in Asgard, despite all of the trouble he caused.

On this occasion, he convinced the Aesir that they should take the builder up on his offer, and get him to build the wall for them for free by making the task impossible. As such, the Aesir agreed to the terms of the builder on the condition that he complete the work in a single season, and that he had the help of no man. The builder also agreed, as long as he could use his horse, Svadilfari, to help him.

It soon became apparent that this was no ordinary horse, and that its strength and endurance would make it possible for the builder to indeed complete his work on time. Worried by this possibility, and angry at Loki for convincing them to agree to the deal, they demand that Loki fix the problem. So, when the wall was almost complete and there was only one day of building left, Loki sabotaged the work by turning himself into a beautiful mare and distracting the horse.

The builder failed to fully complete the work, and the Aesir not only did not pay him, but also killed him when they discovered that he was, in fact, a giant. Some months later, Loki also gave birth to a child, Sleipnir, an eight-legged horse that became the steed of Odin.

The Aesir left the wall incomplete, but it nevertheless seems to have been sufficient to do the job. The realm could only be entered by one gate, or via the Bifrost bridge.

The Bifrost bridge connects Asgard with Midgard, the world of men. According to one story, the bridge appears like a rainbow to men, but is in fact three colors that were fashioned by the Aesir into a bridge with all their skill.

The red color is burning fire, and designed specifically to ensure that the ice giants and the Jotnar cannot use the bridge to ascend into Asgard.

According to another story, the gods ride across the bridge on their horses daily, with the exception of Thor, who instead wades through the boiling waters beneath, through the rivers Kormt and Ormt. They do not use the bridge to reach Midgard, but rather Urdarbrunnr, the Well of Destiny, where they hold court.

The 12 Realms of Asgard

According to descriptions, Asgard is divided into twelve realms, each under the rule of a different deity. Within their realms, the gods dwelled in magnificent halls, resembling those of Viking lords, but on a much grander scale. The names and descriptions of some of these realms and halls are still known today.

By far the most famous Asgardian realm must be Valhalla. This was the realm of Odin, and it is here that Odin had his hall of Valhalla, where warriors that died bravely in battle were taken to dwell until Ragnarok, when they would be called upon again to fight in the final battle. The hall itself is described as enormous and majestic, and thatched with golden shields.

Odin’s wife Frigg also had her own hall in Asgard called Fensalir. This is where Loki went disguised as an old woman to gain the information that he needed to kill Balder. Fensalir may be synonymous with another Asgardian hall called Sokkvabekkr, where a mighty seeress goddess is said to dwell. Frigg is also known for her ability as a seeress, though she never tells anyone what she sees. Odin is described as often sharing a drink with the goddess of that hall.

In his realm, Odin also had his own hall, Valaskjalf, which means “shelf of the slain” in old Norse. This is where Hlidskjalf, Odin’s high throne, was located. Seated here, Odin could look out over all the nine worlds of the Norse cosmos and see all things.

The realm of Thor in Asgard is called Thrudheim, which basically means stronghold, and his hall is called Bilskirnir, which means “lightning crack”. Thor dwells here with his wife Sif and their children when he is not out on his adventures. It is said to have 540 rooms.

Odin’s other son Balder also has a realm in Asgard. His hall there is called Breidbadlik and is said to be the grandest and most handsome of all the majestic halls in Asgard. It is also a place into which nothing unclean can pass.

Balder’s son, Forseti, the god of justice, also has a hall in Asgard called Glitnir, which features pillars of gold and a roof of silver. As the mediator and peacekeeper of the gods, it is here that Forseti hears cases and passes judgments.

Heimdall has a hall named Himingjork, which is located where the Bifrost bridge enters Asgard to facilitate his role as the watchman of the gods. The hunting god Ullr, a son of Sif and stepson of Thor, also has a dwelling, Ydalir.

One of the other better-known realms in Asgard is Folkvangr, the domain of the goddess Freya, one of the Vanir gods that live in Asgard. Like Valhalla, this is a realm where brave warriors are taken to dwell after death. Actually, according to some interpretations, Freya gets the first pick of the fallen. The name of her hall is Sessrumnir, which is again described as large and beautiful.

Idovall is a central plain in Asgard which the gods often used as a meeting place. There is located Gladsheimr, a meeting hall containing thirteen high seats for the gods, and Vingolf, another hall for the goddesses. According to the Ragnarok prophecy, this is also where the surviving gods will meet in order to start building a new world.

While Asgard is described by some sources as being surrounded by divine protection, even the gods cannot escape fate, and their downfall is predicted in the Ragnarok prophecy. When this apocalypse comes, all of the nine worlds of the Norse cosmos will burn in chaos, and most of the important Norse gods will die, including Odin himself, Thor, Heimdall, Freyr, and others.

Asgard certainly will not survive unscathed. Its destruction will start when the fire giants escape from Muspelheim and make their way across the Bifrost bridge, which will crumble under them. But this will not stop the giant legion from entering Asgard, and they will be joined by a legion of the dead led by Loki. These armies, together with Loki’s sons Fenrir, the great wolf, and Jormungandr, the Midgard Serpent, will see the utter destruction of Asgard before dying themselves.

The only part of the heavenly realm to survive will be Idovall, the fields at the center of the realm. Here the few surviving gods will meet to begin to rebuild the world. They will recreate the splendor of Asgard, staring with a new hall called Gimli, which will have a gold roof, just like many of the halls that it is replacing.

What do you think of Asgard? While it is a realm located in the heavens, does it sound like a description of the modern concept of “heaven”? Or does it seem more like it mirrors the realm of men, with individual kingdoms, princely halls, and fortifications?