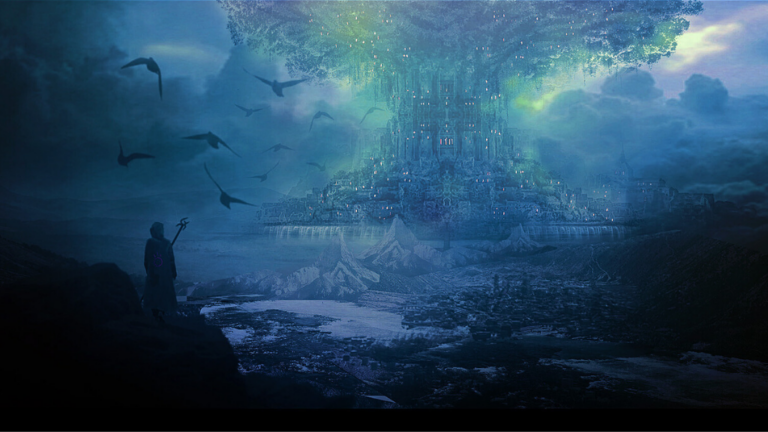 It is also sometimes considered a world of evil, and the dead, synonymous with Helheim.

But our knowledge of Niflheim is actually unclear, as it all comes from the stories recorded by Snorri Sturluson, who was an Icelandic Christian writing during the medieval period. He often confuses traditional Viking ideas as he conflates them with his own Christian belief system.

Moreover, while we are told that there are nine worlds, we are never given a definitive list of what they are, and the worlds often have more than one name, and are described differently in different sources.

As a result, we do not always have a strong basis for conflating or distinguishing between the Norse worlds.

But let’s take a look at what exactly we do know about Niflheim.

According to his account, Niflheim and Muslpelheim emerged from Ginnungagap, the yawning void. The two worlds separated with Muspelheim moving southwards, which to the Vikings also meant upwards, and Niflheim northwards, which meant downwards.

These directions of travel make sense in terms of Yggdrasil, the world tree which the Vikings believed contained all the nine worlds of the Norse cosmos, holding them among its roots and branches.

So Niflheim was among the roots of the tree. This is also where the well Hvergelmir could be found. It was from this well that all rivers in all the worlds flow.

The heat of Mulspelheim and the frost of Niflheim met in the middle in the location of the void. These mixed together to create a primordial goop, from which further life emerged.

The first life to emerge was Ymir, a primordial giant. From him, all other giants stemmed, springing from his armpits.

The Aesir god Odin and his two brothers were so concerned about the number of giants that were emerging from Ymir that they killed the giant, and used his body to create worlds to occupy the space of the void, probably around the middle of Yggdrasil.

They certainly created Midgard, the middle world, and later created mankind to occupy it. They may also have created Jotunheim to contain the giants. They protected Midgard from Jotunheim with fortifications made from the eyebrows of Ymir. Midgard was also contained by a body of water, the Midgard Sea. This is the sea into which Jormungandr would later be thrown and become known as the Midgard Serpent.

When Sturluson describes the cold and mists emerging from Niflheim during creation, he also states that all terrible things come from Niflheim. This suggests that Niflheim was not just a world of cold, but also a world of evil.

Muspelheim was also considered a world of evil, as it was occupied by the Fire Giants, enemies of the Aesir gods that would emerge from their world at Ragnarok to destroy the Aesir gods. But we are not told of any such inhabitants of Nifelheim.

Helheim was a realm of the dead. It was a place where many Vikings that did not die bravely and find themselves in Valhalla or Folkvangr would find themselves. But it was not just for the wicked.

But to add further confusion, within Helheim, there was a place called Niflhel, which was the lowest level of Helheim where the wicked would be sent.

The similarity in names and descriptions has led the worlds to be conflated, but Sturluson alone uses the names interchangeably in a passage where he states that the giantess Hel, a daughter of Loki, was sent to Niflheim to rule over the dead there.

But some scholars have also suggested that an error exists in the copying of the text and that Sturluson actually wrote Niflhel, and so may not be equating the two worlds at all.

Other references are equally unclear. In another story, Odin asks the giant Vafthrundir can tell him all the secrets of the gods and the giants. The giant responses that he can, and that he has traveled to all the worlds, including Niflhel. The giant may be referring to Niflheim or the lowest level of Helheim.

In another story, Odin travels on his eight-legged steed Sleipnir to Niflhel in order to discover the causes of the bad dreams of his son. This was clearly within Helheim, as there he met the hound of Hel, which is presumably Hel’s guard dog Garm.

But none of this really provides us with clear insight into the potential relationship between Niflheim, Helheim, and Niflhel.

So, what we are left with is a bit of a mystery. Niflheim is a frigidly cold world of ice that was one of the first primordial worlds to exist, and it sits among the roots of Yggdrasil. But it may or may not be simultaneous with, or contain, Helheim, the realm of the dead that also sits at the roots of the world tree.

Perhaps it is one of those secrets that can only be discovered with the voyage of death.

What do you think? Are Niflheim and Helheim one and the same?