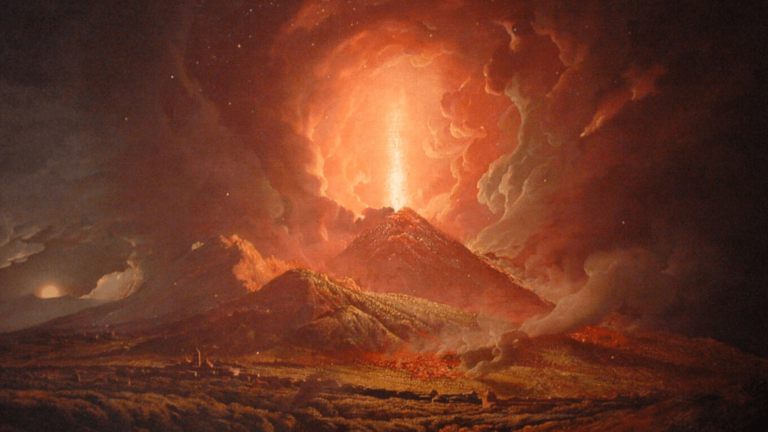 One of the nine worlds that formed the cosmos in Norse mythology, Muspelheim, the realm of fire, plays an important role in both the creation of the Norse universe and its final destruction at Ragnarok.

Muspelheim was the home of the Fire Giants, an old enemy of the Aesir gods led by Odin. They were led by the mighty giant Surtr, whom the Vikings held in awe and fear.

Muspell, or Muspelheim, means “realm of fire” in Old Norse, and the Vikings believed that it was a realm of fire and brimstone.

They describe it as hot and bright, and the conditions rendered the realm so harsh that it is impassable to those who are not of the realm itself.

The Vikings also believed that it was in the south, which makes sense as the Vikings often described cold worlds as being in the north, and warm ones in the south.

But north also meant downwards, and south upwards. The Vikings believed that the nine worlds that formed their cosmos were all nestled somewhere in Yggdrasil, the tree of life.

Clearly, the Vikings were early advocates of the south-up map movement. There are arguments that the map orientation has had a huge impact on how we view the world and international politics.

These two primordial worlds existed alone in Ginnungagap, the “gaping abyss”. In the middle of the abyss where the ice of Niflheim and the heat of Muspelheim met, it formed a primordial goop from which the rest of creation began.

At around the same time, sparks from Muspelheim also jumped into the sky, creating the sun, moon, and stars.

The god Odin and his two brothers so feared the number of giants that were emerging from Ymir that they slew the giant and used his body to create some of the other worlds of the Norse cosmos, including Midgard, the realm of men.

The children of Ymir, the Jotun, were superhuman beings that lived to create chaos. As such, they were considered the antithesis of the Aesir gods.

As a result, they are often portrayed as the enemies of the Aesir in the stories of Norse mythology. Though, this didn’t stop the Aesir and the Jotun from mating on a regular basis. Thor himself was the son of Odin with the giantess Jord.

The Jotun lived in a number of different realms across the Norse cosmos. There was Jotunheim, a realm of the giants that seems to have resembled that of Asgard and Midgard in terms of environment, but other giants lived in Muspelheim and Niflheim. Those that lived in the fiery land were called Fire Giants, and those that lived in the land of ice, Frost Giants.

In most of the stories of Norse mythology, the gods seem to interact with the giants of Jotunheim, and the Aesir are known to have visited their realm. For example, Odin traveled to the region of the giants in order to steal the Mead of Poetry, while Thor traveled there in order to reclaim his hammer Mjolnir, which one of the giants stole, presumably from Asgard.

But Muspelheim seems to be different. The Fire giants appear to be trapped there, unable to enter other realms. The leader of the Fire Giants, Surtr, is often described as “guarding” Muspelheim, sitting at its gates. But considering what is prophesized to happen at Ragnarok, it seems more likely that he is sitting there, waiting for the gates to open.

According to Ragnarok, the prophecy of the end of the world, the destruction of the gods, the universe, and everything within it, will begin when the cosmos is rocked by earthquakes.

Presumably, these earthquakes will be caused by Loki eventually breaking his shackled. The trickster giant was bound to two boulders by the Aesir gods for his role in the death of Balder, a son of Odin and the most beloved of the gods.

A serpent has been placed above his head and drips painful venom onto his body, causing him to writhe in pain, which in turn causes earthquakes. His wife Sigyn tries to protect him from the pain, by catching the venom in a bowl, but she must occasionally leave to empty the bowl.

Eventually, Loki will break his chains, but it will so shake the cosmos that it will also break some of the barriers that keep the worlds contained.

A crack will open in the border of Muspelheim, allowing for the Fire Giants to leave their realm. Surtr, the Fire Giant leader and guardian, will lead the giants of Muspelheim out of their land and across the Bifrost bridge into Asgard, destroying it as they cross.

Brandishing a burning sword, Surtr and his army will leave a trail of destruction in their wake, burning everything to the ground.

Eventually, Surtr and the god Freyr will fight to the death, but the damage will have been done.

At the end of the battle of Ragnarok, the burning worlds will sink into the waters of chaos, and the cosmos will become a void again.

What do you think of Muspelheim, and how much does it resemble the Christian idea of Hell?

Not the Hell for souls of the wicked, but the Hell occupied by demons. In Christianity, demons are akin to angels, beings of the same ilk but of different spirits.

This too does not seem too dissimilar from the way that the Vikings saw their gods and giants. Both were superhuman beings that could interbreed, but while the Aesir existed to maintain peace and order, the giants were forces of chaos.

Is it all just coincidence?