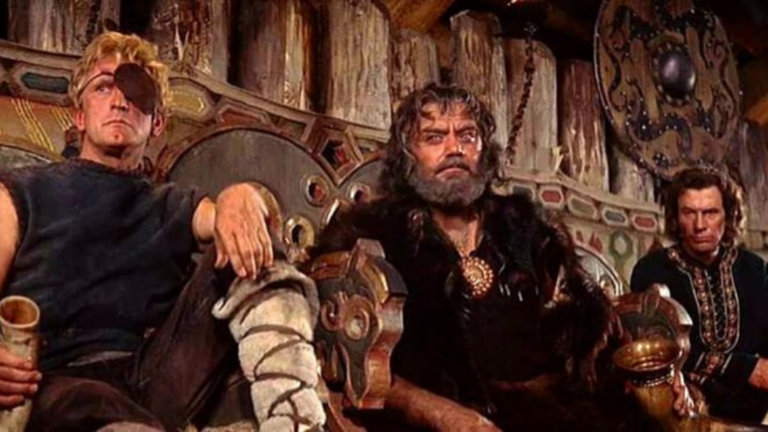 The History Channel’s TV show Vikings has really set the bar in terms of good representations of the Vikings in film and television, but they are far from the first to have tried to bring our favorite warriors to life.

Scores of films have been made about the Viking Age, some good, some bad, and some outright terrible. The team here at VKNG have put our heads together and come up with a list of our 14 favorite representations of Norse Warriors in Cinema.

Let us know what you think and whether your list matches up with ours!

Any list of fantastic Vikings films must of course start with the Kirk Douglas classic, loosely based on the sagas of Ragnar Lodbrok and his sons. It was filmed on location in Norway and Brittany, and provides some great shots of the historic sites.

It tells the story of a legitimate and illegitimate son of Ragnar, fighting for power.

This movie gives us the memorable scene of the Viking ship burial near the end of the film.

Shot in Iceland with a mostly Icelandic cast, this American film tells the story of Kjartan, a young Icelandic man that must protect his father’s land from a hoard of raiding Vikings.

He seeks the help of an older Viking (think Viking Obi-Wan or Mr Miyagi) who trains him to be a fierce fighter.

Antonio Banderas stars as Ahmad ibn Fadlan, a real Muslim ambassador who left records about the Vikings, though that is where the historic accuracy of this film ends.

A series of unfortunate events finds him fighting alongside a band of Viking warriors and becoming involved in Viking political intrigue.

The movie takes an interesting look at the idea of the Berserker warriors.

This German film is based on the Volsungasaga, in particular the story of Siegfried and Brunhild, and chronicles the life of Siegfried from birth to death.

The story starts with the hero’s slaying of the dragon Fafnir, which brings into his possession a cursed ring destined to bring trouble to whoever owns it.

This film sticks quite closely to the story, but is also set against the background of the Christianisation of the Vikings.

Another film loosely based on the epic poem, this Canadian-Icelandic fantasy stars Gerard Butler as Beowulf in 6th century Denmark, though the film was largely shot in Iceland.

A story about what is really good and evil, the movie also tries to express the mysticism of the era, with dubious success.

The film tries to present the savagery of the Viking world, but in modern terms, which can be both compelling and jarring.

This action epic tells the story of the Norse arrival in North America, and their battles against nature, natives, and encroaching Christianisation (again – a common theme).

The film starts in almost documentary style, and then slows down into an almost silent film, delivered to a striking heavy metal soundtrack.

Rather than following the famous Leif Ericson, it is based on the subsequent adventures of Thorfinn Karlsefni, who attempted to establish a permanent colony.

Loosely based on the 9th century Old English epic Beowulf, Jim Caviezel stars as an alien warrior from a race that seeded life on Earth.

His ship lands in Viking Norway and he is chasing a monster that destroyed his world, and he teams up with the Vikings to protect theirs. The costumes in this film are particularly delightful and authentic.

The alien element allows us to see the Vikings through an outsider’s eyes, and gives the filmmakers an excuse to do some gory alien sequences.

Danish actor Mads Mikkelsen stars in this English-language Danish film. He plays a Viking warrior named One-Eye who, with a boy companion travels with a group of Christian crusaders to the Holy Land.

They accidentally find themselves in North America, where they encounter dark and mysterious forces.

A little esoteric, this is more of a survival film than a historical epic, but still good fun.

This kid’s comedy follows young Viking boy Vicky, who is not as strong as his peers, but always manages to outsmart them.

When his friend is kidnapped, be must team up with his father, who has never really understood him, to save them.

The first film was so successful that a sequel was released in 2011. While the story might be aimed at children, the Viking setting is still highly enjoyable.

DreamWorks make such good pictures, that it is no surprise that it is also one of the best Viking movies of all time, especially since they are based on the popular children’s books by Cressida Cowell.

The movie and its sequels follow a young Viking named Hiccup, who is considered a misfit, until he successfully trains a dragon.

The films explore surprising deep themes about fear, xenophobia, and doing what is right even when it is difficult.

In this British action film, a dying Viking king in Britain, whose lands are under threat, sends out his younger son to find his estranged older son, and gain his help in defeating their enemies.

This puts him on an epic quest, but he learns more about his family secrets than anything else.

The plot is thin, but the action skirmish scenes will appeal to any fans of grizzly Viking fare.

A Swiss, English-language film, it follows a group of Vikings stranded on the Scottish coast after a storm. Under attack from all sides, they take a princess hostage in order to try and make their way to a friendly Viking settlement.

Little do they know that they have landed in the middle of intrigue, and local powers want to use them to their own ends.

This movie is particularly well-loved for its soundtrack, including two songs by Swedish melodic death metal band Amon Amarth.

This awesome Russian epic was inspired by the Icelandic Kings’ Sagas and tells the story of Vladimir, a 10th-century prince from the Kievan Rus area (modern-day Ukraine).

Treachery forces him to fell to Sweden where he assembles a force of Viking mercenaries in order to regain his power in the east, and of course, for revenge.

Not the most historically accurate, and a bit too much Christain propaganda, but a nice portrayal of Viking warriors.

While this film and its sequels might stray far from the original source material (though not the comics on which they are based), they are still some of the most influential Vikings movies of our time.

We love Chris Hemsworth as Thor, Anthony Hopkins as Odin, and especially Tom Hiddleston as Loki. He has certainly captured the spirit of the giant, as neither good nor bad, just damaged and selfish.

But, yes, please do remind your friends that Loki was not the brother of Thor, adopted or otherwise. But Loki did often accompany Thor on his adventures.

3 thoughts on “14 Best Viking Movies Of all Time”