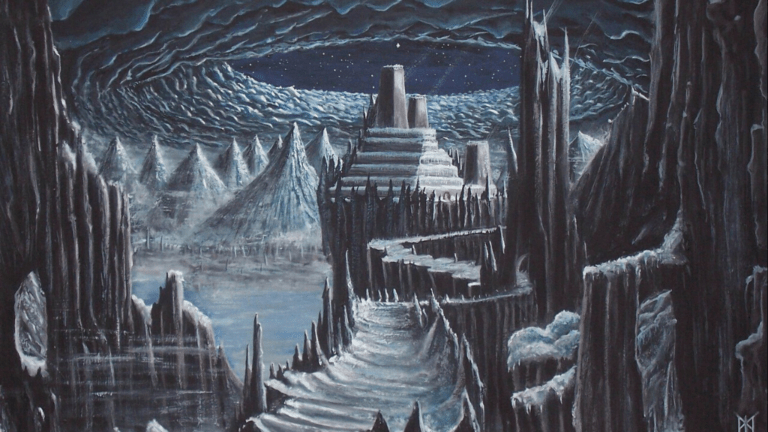 According to Norse mythology, the cosmos is comprised of nine distinct worlds, each of which sits among the branches of the Tree of Life, Yggdrasil.

These beings were forces of chaos that actively menaced both men and the gods. But what was their world really like?

Jotunheim, pronounced “yo-tun-hame”, literally means home of the giants, explicitly referring to the beings that occupy the realm, like the names of most of the Norse worlds.

Though Jotunheim is occupied only by certain species of giants, specifically rock giants and frost giants. The fire giants live in the world of Muspelheim.

According to descriptions of Jotunheim found in the Eddas, it is a grim environment of deep dark forests and stark mountain peaks that is fairly inhospitable. There is no fertile land there, so the Jotuns live through hunting and fishing. Jotunheim is separated from Midgard and Asgard by the river Iving, which never freezes offer, therefore preventing the giants from crossing over into these two worlds.

Jotunheim was also known as Utgard, which means “world beyond the fence”. This is a name taken from Germanic methods of referring to land beyond the boundaries of a property or a community. As such, it referred to lands beyond law and order, and the social norms that govern society. It is the name for lands where chaos presides.

That Jotunheim was seen as a world of chaos is clearly demonstrated in the story of Thor and Loki’s visit to the stronghold of Utgard in Jotunheim, where the giant Utgard-Loki lives. While there, they find that nothing is as it appears, and that it is almost impossible to distinguish between dream and reality.

World of the Giants

But while Jotunheim seems to have been imagined by the Vikings as a world of chaos, they also seem to have imagined it as a world that resembled their own.

It is spotted with strongholds ruled over by Jotun chieftains, much like their own world, but on a much grander scale.

Several giant strongholds are described in the surviving texts. As well as the castle of Utgard-Loki, which was made from blocks of snow and icicles and was so big that you could not see the top of it, there are also the castles of Gastropnir, which was the home of the giantess Menglad, and Thrymheim, home of the giant Thiazi.

The most well-known giant lord was Thrym, known for having stolen Thor’s hammer Mjolnir. Thor famously dressed up in drag to try and fool the giant into thinking that he was the beautiful goddess Freya there to marry him in order to trick the giant into bringing out the hammer to bless the wedding. When Thrym brought the hammer out, Thor stole it back and killed all of the giants in the hall.

But this story too points to the fact that the Vikings still saw Jotunheim as a world recognizably like their own. In a land of true chaos, weddings would not need to be blessed in the same way as those of men.

The giants were the enemies of the Aesir gods, and were constantly causing trouble for both the gods and men. It was the role of Thor to protect both Asgard and Midgard from the troublemaking giants.

But as the proposed wedding between Thrym and Freya suggests, they weren’t just fighters, the giants and the gods were also lovers. In fact, many of the Aesir gods had giant lovers and mothers.

Thor himself was the son of Odin with the giantess Jord, an embodiment of the earth itself. Thor then had a giant lover Jarnsaxa, with whom he had his two sons Magni and Modi. The god Freyr became infatuated with, and later married, the giantess Gerd, and Njord briefly married the giantess Skadi, who may later have been a lover of the god Odin.

The most famous frost giant from Norse mythology is certainly Loki, who dwelled in Asgard among the Aesir and was responsible for causing the trouble that started the majority of their adventures. He was not an adopted brother of Thor, but rather he made some kind of blood brotherhood pack with Odin, which was why the Aesir had to accept him in Asgard, despite all the trouble that he made.

Loki too married one of the Aesir, the goddess Sigyn, with whom he had two sons, Nari and Vili. He also had a giantess lover Angerboda, with whom he had three children: the Midgard serpent Jormungandr, the terrifying wolf Fenrir, and the giantess Hel, who went on to be the ruler of Helheim, the realm of the dead. The nature of the children of these two giants reflects the way in which the Vikings saw the giants. Not as a specific race of people, but as a group of unpredictable and dangerous beings.

But what do you think of Jotunheim, with its strongholds and social hierarchies? Was it truly a world of chaos, or did it simply represent how the Vikings imagined life could be at the very boundaries of what they considered normal? Would you venture into Jotunheim?