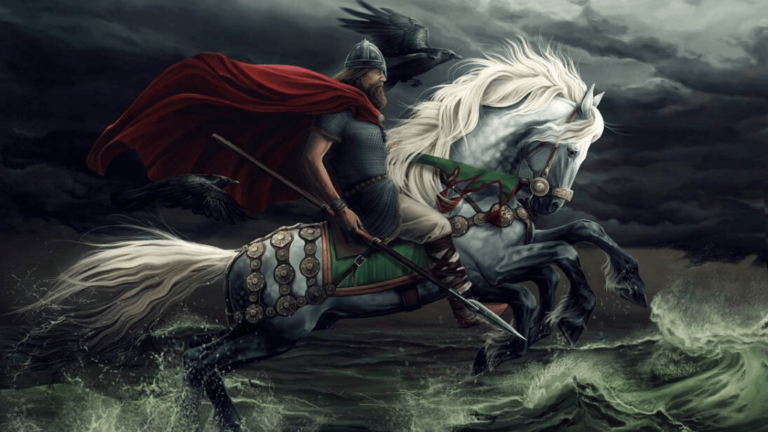 While Thor might be the best-known of the Norse gods, Odin was the most important of the Viking deities. Called the “Allfather” in recognition of his role as the ruler of the Aesir gods, he was a complex being.

He was the god of war, wisdom, magic, death and the runes. He was intelligent and strong, but far from omnipotent, and also extremely flawed.

Let’s learn more about the most fascinating of the Norse gods.

While Thor may have been the most popular of the Norse gods, as indicated by the multitude of Mjolnir (Thor’s hammer) amulets found in the archaeological record, Odin was the most important. He was the principal god of Scandinavia throughout the height of the Viking period.

While Odin had a potent seed, and was the father of many of the Aesir gods, he was certainly not the father of all. He only receives the title “Allfather” in later Christianized sources, suggesting that the idea as a Christian projection.

Odin was the ruler or chieftain of the Aesir gods, much like a human Viking chieftain. The Vikings often described the gods, and the giants, as having social hierarchies very similar to their own.

According to Norse mythology, before the creation of the world Buri, the forefather of all the gods, appeared out of the ice. His son Borr mated with the giantess Bestla, giving birth to Odin and his brother Vili and Ve.

At the same time, the primordial giant Ymir was reproducing, with giants springing from his armpits. Worried about the chaos that these beings would wreak on the universe, the three brothers killed Ymir and used his body to create the earth.

The brothers later created human beings to populate their new world. But they quickly saw that humans would be unable to defend themselves in the Norse universe, so they fenced Midgard, the world of men, off from the rest of the cosmos and became their deities and defenders.

While Odin was the creator of men, it was his son Thor who was their principal defender. He was responsible for defending Midgard and Asgard the world of the Aesir gods, from the giants.

But Thor was only one of Odin’s many children.

Odin was married to Frigg. While she is described as the foremost of the goddesses, little else about her is known. In fact, very little is known about any of the Norse goddesses as the surviving sources are very male-oriented. But It is thought that she had the power to see the future, though she never told anyone what she saw.

With Frigg, Odin had a son Baldr, whose death at the hands of Loki set in motion the course of events that would lead to the end of the world. Odin and Frigg tried to deal with Hel, the giantess in charge of Helheim, to have Baldr returned to them, but to no avail. They did take their vengeance on Loki, sentencing him to be chained to a stone for all eternity with a venomous snake dripping agonizing poison onto his body.

Odin fathered Thor not with Frigg, but with a giantess Jord, also thought to be a personification of the Earth. Inter-breeding between the Aesir gods and giants was very common, even Odin’s mother was said to be a giantess. The gods and giants should probably be thought of as different clans, rather than different classes of being.

Odin had another son Vidarr, with another giantess Gridr, who is destined to avenge his father’s death following Ragnarok.

Odin probably had several other children that are not recorded in the surviving sources. Nowhere are we provided with a complete family tree of the Aesir gods. He is also sometimes credited with being the father of Heimdall, the god Bragi, Try, and Hodr.

But one thing that is clear is that he was not the father, adopted or otherwise, of Loki. A giant, Loki and Odin took an oath of blood brotherhood, though the details of the circumstances do not survive. This is why Loki was able to stay in Asgard for a period of time after he was discovered as responsible for the death of Baldr.

All of the Norse gods are complex in their powers. None is responsible for just one thing, and there is significant overlap between the different gods. Odin’s sphere of activity is particularly broad. He was the god of war, wisdom, poetry, death, the runes and magic.

While Thor may have embodied the ideal warrior, it was Odin’s favor that the Vikings invoked before battle. They believed that it was Odin who decided who would win and who would lose, and could offer individual protection and strength to warriors.

One of the many rituals that the Vikings would engage in was to throw their spears over the heads of their enemies, dedicating them to Odin ahead of the battle. This was in imitation of Odin himself, he threw his spear over the heads of the Vanir gods to officially initiate the Aesir-Vanir war.

This spear was probably Gungnir, made by the dwarves, and enchanted so that it would never miss its mark. Figures in Viking art are often identified as Odin due to the presence of a spear.

Odin is described as a wise old man, a grey beard, and he was represented as being so thirsty for wisdom, that he would do anything to attain it.

For example, Odin is also depicted as having just one eye, as he plucked out his own eye as an offering to be able to drink from the Well of Mimir, also known as the Well of Wisdom.

The wisdom greedy Odin is also said to have drunk the entire horn of the Mead of Poetry to gain mastery of the spoken word. He had to turn himself into a snake and rely on all his trickery to sneak his way into the stronghold of the giants that were guarding the mead, and seduce a giantess in order to be left alone with the magical drink.

When the giants discovered what he was up to, Odin turned himself into an eagle in order to escape, and the giants gave chase. According to the story, Odin either spilled some of the mead, or let some of it escape his body in the form of bodily waste. This was how the mead made its way into the world of men, and how the bards gained their skills.

The Vikings believed that Odin, assisted by the Valkyries, selected warriors who had died bravely in battle to pass their afterlife in Valhalla, a hall of Odin in Asgard. There they would feast and fight until the arrival of the end of days, when they would fight for Odin during the battle of Ragnarok.

Despite his association with death, Odin was not all-powerful in this area. When Loki’s scheme saw Odin’s son Baldr killed, he was not taken to Valhalla, but to Helheim. While Odin treated with Hel, the guardian of Helheim, to try and secure Baldr’s return, this was to no avail. Thus, it is clear that Odin’s power over death was limited.

This suggests that the Vikings considered death to be a fundamental part of existence, and a fate that even the gods could not hide from.

Again, showing his insatiable thirst for knowledge, Odin hung himself from Yggdrasil, the tree of life, for nine days and nine nights while pieced by his own spear in order to gain knowledge of the runes.

The runes were revealed to him as part of his ordeal, suggesting an association between the tree and the runes. This may link up with the Norse belief that the Norns, the Norse Fates, lived at the base of Yggdrasil and carved the fate of men into its bark using the runes.

It was Odin who then shared knowledge of the runes with mankind. The Vikings believed that the runes were more than just an alphabet, but also a toolkit for working magic if you knew how to use it. Which Odin certainly did.

Odin was also a god of magic, of the runes and also of Seidr, a type of magic concerned with both seeing and shaping the future.

Odin was considered a master of this kind of magic, which may have been considered a backhanded compliment as Seidr was considered a distinctively female art. Human men that practiced Seidr were often treated with suspicion and ridicule. In one story, Loki taunts Odin on this very point.

Odin is described as a mature wise man wearing a hat and cloak and with a long beard. He has one eye, having sacrificed it for wisdom at Mimir’s well, and carrying his spear Gungnir. The presence of a spear is often what allows us to identify a figure as Odin.

While not as popular as hammer amulets, small spear amulets also survive from the archaeological record. But unlike hammers, which were relatively rare as weapons, the most common weapon among Viking warriors were spears.

Odin had many other attributes, reflecting his complexity as a deity.

Odin had a horse, Sleipnir, an eight-legged steed that allowed him to move between the worlds of the Norse cosmos Odin. Again, Odin is often depicted on an eight-legged horse, its long legs fashioned into elaborate patterns.

He had a ring, Draupnir, a fine gold ring that would create eight rings of equal quality every ninth day. This was an appropriate treasure for a chieftain, as chieftains have to secure the wealth of his warriors and followers by sharing wealth. Therefore, it makes sense that the Vikings would have imagined Odin as a very wealthy being.

Odin was accompanied by two ravens, Huginn (thought) and Muninn (wisdom). They could travel the cosmos and report what they saw back to Odin. He also had a throne in Asgard, called Hildskjalf, from where Odin could see all things happening across the cosmos.

How Does Odin Die?

While the Vikings considered their gods to be very powerful, they were not omnipotent, and they were not beyond death, as we have already seen with Odin’s son Baldr.

Odin himself is destined to die at Ragnarok, the prophecy of the end of the world preserved in Norse mythology.

The prophecy describes a far reaching apocalypse that will affect the entire Norse cosmos, and will see Loki lead an army of giants and the dead into Asgard. Odin will call on his own fallen warriors to fight alongside him in the great battle.

Odin is fated to die in this battle, devoured by the great wolf Fenrir, another child of Loki. Odin is often depicted standing before the open mouth of the wolf with his spear in hand. While his son Vidarr will avenge Odin, killing the wolf, with the death of Odin, all things will come to an end.

The oldest surviving records of the prophecy describe Ragnarok as a total apocalypse, with the world sinking into the sea and nothing remaining. Later, versions suggest that some of the gods will survive to rebuild the world, but this is probably a Christianizing influence.

What do you think? How do you think the original Ragnarok prophecy ends? And do you agree that Odin is the most fascinating of all the Norse gods?