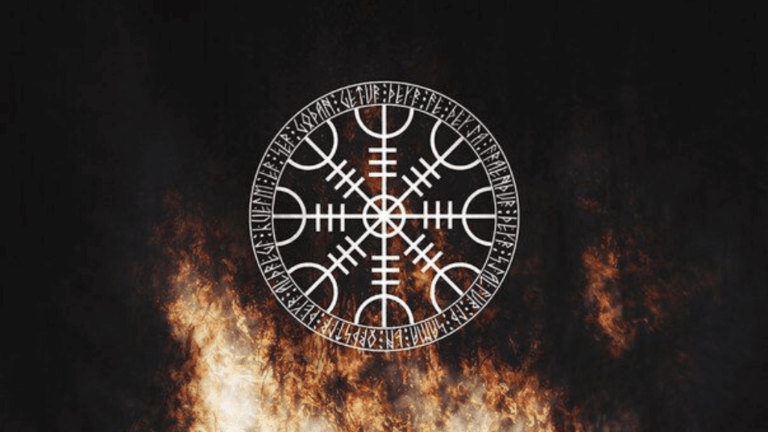 Symbols were important to the Vikings. For the Vikings, the runes were more than just an alphabet. They believed that runes could not only describe the world as a written script, but, when used correctly, could also shape the world. This is why the Norns, the Norse Fates, wrote the destiny of men by inscribing runes onto Yggdrasil, the Tree of Life.

For the Vikings, the runes were an important part of Seidr magic, which often involved the use of runic symbols.

What does the helm of awe mean ?

The helm of awa mean a lot for vikings. One of the most potent magical runic symbols used by the Vikings was Aegishjalmr, also known as the Helm of Awe, which gave Viking warriors protection, and also courage and strength.

Norse Magic and the Runes

Thanks to his knowledge of the runes, Odin himself was an expert in Seidr magic, which involved both discerning and changing the courts of fate by pulling in the strings of what has already been written.

Viking men and women could also use the runes to affect the course of fate. For example, in the Saga of Egil, the eponymous hero stays with a farmer whose daughter is very ill. In order to help the farmer, he investigates, and he finds a crudely carved rune in the girl’s bed.

It seems that a local boy, trying to help the girl, has placed the rune there. But he formed the rune badly and it is doing more harm than good. Egil, as a master of the runes, erases the dangerous rune and replaces it with a new rune that will undo the ill effects.

Aegishjalmr, or the Helm of Awe, is one of several runic symbols that we know about from 17th century Icelandic grimoires that preserve some of the earlier Viking magical practices.

The symbol was designed to protect warriors in battle, and also give them courage and strength, assuring their victory against their enemies. The symbol could also be used to give a person the fortitude to overcome their own fears.

According to the manuscript, Viking warriors would draw the symbol on their forehead, between their eyes, before going into battle. Sometimes in blood. There it would interact with the pineal gland as the centre point of the Viking soul.

According to Icelandic folktales collected by Jón Ármason in the 19th century, the symbol could also be made from lead and pressed into the space between the eyebrows. The user would then recite the formula:

I bear the helm of awe between my brows!

The name of the runic symbol derives from Aegis, the giant that ruled over the sea. He was not a benevolent being. He was often covetous and would smash ships in order to take their treasure for himself. He was also skilled in the art of magic. The connection between Aegis and this symbol are unclear. Perhaps it was the idea that the sea is an unstoppable force.

The Aegishjalmr runic symbol is not depicted identically in all the surviving sources. For example, in Galdrabok, a 17th century Icelandic grimoire, it is depicted with only four arms, while in the 19th century folktales, it appears with eight arms.

Either way, the arms project out from a central point, and terminate with Algiz, the Z-rune. In some cases, each runic stave also bears three lines running perpendicular to the runes themselves, but these are not always present.

The Algiz rune was associated with protection and prevailing against one’s challenges, which made it the perfect rune to form the core of Aegishjalmr. It reoccurs regularly in several runic symbols known from the Icelandic grimoires including:

Fafnir and the Helm of Awe

The most famous user of the Helm of Awe was Fafnir. He was a dwarf, son of King Hreidmar. He, and all his family members, were sorcerers that also had the power to shapeshift. Fafnir’s father was incredibly wealthy, and Fafnir, as the strongest of the kings three sons, was responsible for guarding the treasure.

It was said that among the treasure was an object called the Helm of Awe, which Fafnir would wear to enhance his already great strength in his role as guard. Scholars believe that this object was a physical helm that the dwarf donned.

The helm was probably magically enhanced, likely using the Aegishjalmr symbol, to give the wearer additional strength. Considering the dwarves were a family of sorcerers, perhaps it is no great surprise that they would possess such an enchanted item.

The helm eventually falls into the possession of the hero Siegfried (also known as Sigurd). A series of unfortunate events leads Loki to give the dwarf king a cursed ring that leaves people with an uncontrollable desire to possess the ring, but also curses the possessor of the ring to a tragic ending.

Regin eventually convinces Siegfried to kill Fafnir in order to gain the ring. But Siegfried learns that Regin, in turn, intends to kill him, and so kills both of the dwarf brothers. The ring, and the other treasures of Fafnir, including the Helm of Awe, then become the property of Siegfried. Nothing more is heard of the enchanted helmet after that.

The Helm of Awe is a popular symbol among followers of Asatru, modern followers of the old Norse faith. It invokes the protection of the Norse gods, and therefore symbolizes alignment to the old Viking religion

. It also imbues the wearer with courage and the fortitude to face their fears, which are considered important qualities of followers of Arastu. Therefore, Aegishjalmr is considered the perfect symbol for the religion.

What does Aehishjalmr mean to you?