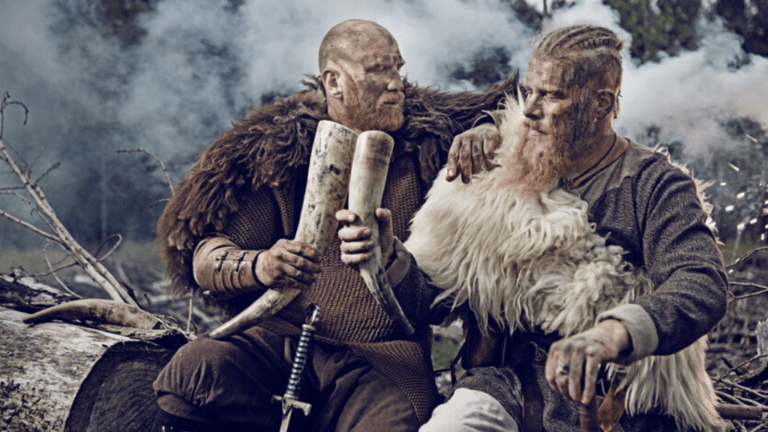 We often imagine the Vikings as having a work-hard, play-hard culture. They gave their all on the battlefield, and afterward celebrated with nights of heavy drinking of mead and beer, out of large drinking horns ideal for drinking games!

That is actually not too far from the truth. The Vikings did mark their victories with drink, and the sharing of alcohol played an important role in the customs that cemented social hierarchies and political alliances.

But more than that, drinking was just part of life, the Vikings would even drink beer for breakfast. But that didn’t make them alcoholics, it was a necessary practice at the time.

Read on to discover more.

They were served alcohol not by the Valkyries, but the noble women of the household. The women would serve the men in order of rank, reinforcing the social hierarchy of the group.

This ritual was callMany surviving stories about the Vikings reference the fact that warriors who die bravely in battle are taken to Valhalla, the hall of the god Odin. There they will drink their fill, served by the beautiful Valkyries, until Ragnarok, when they are called on again to fight alongside the gods.

This image is not too different from what living Vikings would have done after successes. The lord of the group would have invited his warriors to his longhouse, also often called mead halls, where theyed a Sumbel, which was a communal drinking ceremony. It did not generally include food, which was probably served earlier.

The leader of the group would praise his warriors and give out gifts and favours. In response, his warriors would reclaim their oaths of loyalty. The oaths sworn over the drinking horn were considered sacred, and consecrated by the gods. Perhaps the Vikings also recognised that it is hard to lie while under the influence of alcohol.

During these rituals, the drink was always served out of large drinking horns. These were not easy to put down, so drinkers would have to drain the horn quickly.

The Vikings respected men with this ability. This is apparent in the story of Thor visiting the home of the giant Utgarda-Loki. There he is challenged to drink from an enormous drinking horn in a single gulp. Thor is confident in his ability to complete the task, but it is a ruse. The horn is magic and filled with all the water in the Midgard sea. Fortunately, Thor was unable to drink it all.

As well as marking success at war, drinking would have formed an important part of other celebrations, such as marriages. Two families would share cups of mead to mark the new union marked by the wedding. The Viking archaeological record is teaming with drinking vessels, brewing equipment, and images of people happily sharing a drink.

But more than just a way of celebrating an occasion, much like we do today, alcohol was an essential part of life. Access to clean water was prized among the Vikings, but it was not always available. The process of making alcohol also purified water, making it safe to drink.

The resulting drink also had a long shelf-life, so it could be taken on sea voyages as a source of safe hydration. Ales and beers also contain essential calories, which would have supplemented the Viking diet and given them the energy they needed to attack the challenges of the day.

The Vikings normally only ate two meals a day, in the morning and in the evening. When clean water was not available, the Vikings, including children, would have drank beer or ale with both meals, though it would have been a low potency.

The low potency ales and beers that people drink on a daily basis would have been made at home by the women of the household, introducing yeast from one batch to the next. It was brewed from grains, mainly barley but whatever was seasonally available, boiled in water in a kiln, that would have given the liquid a smoky smell and flavour. Other ingredients could also be added to the mix to produce a unique taste, such as juniper or horehound.

On special occasions in the house of the lord, the Vikings would have drunk a stronger mead, which was probably between 10 and 20 percent. It was made by blending two or three pounds of honey with a gallon of water, and then adding other flavourful plants to make different varieties. The resulting drink could have been a light, wine-like concoction, or something heavier, like a liquor. This would only have been drunk on special occasions due to the among of honey needed to produce the mead.

While it is not expressly mentioned in any sources, the Vikings probably also drank cider. Apples were plentiful in Scandinavia, and they ferment naturally, and don’t require the addition of any fermenting agents. This may well have been a drink so common that the sources did not consider it worth mentioning.

The Vikings, great travellers and traders, also drank imported alcohol, though again this would mainly have been at the tables of lords on special occasions. Wine was a common drink across the Mediterranean for more than a millennium before the Viking age. While grapes do not grow in the north, the Vikings certainly traded for the drink. And would often include wine, or even vineyards, in the tributes that they demanded after raids. It is telling that Leif Erikson was so delighted when he discovered grapes in the Americas that he named the new land Vinland.

Unsurprisingly, the Norse gods were also portrayed as drinkers. Thor had a prestigious reputation as a drinker, as the story above showed. There are also several stories that portray the gods as sitting down to share a drink.

In another story, Thor is described as visiting the giant Hymir in order to get a cauldron big enough for the gods to brew beer for a big party. In another story, it is after Loki has had too much to drink that he starts to criticise all the gods, revealing some of the secrets. Odin was the god of drink, among his many attributes, and some descriptions of him say that he did not eat at all, and only drank. But the most famous story about the gods and drink is the story of the Mead of Poetry.

According to the legend, at the end of the war between the Aesir and Vanir gods, to make their truce both races of gods spat into a bowl. From the steam that arose from the mixing of this divine saliva emerged Kvasir, the wisest of all beings. Kvasir spent some time travelling the Norse worlds and sharing his wisdom.

Kvasir was killed by two dwarves, that wanted his blood. The dwarves, master craftsmen, were often seeking exotic ingredients to imbue their creations with magical properties. For example, the feather light chains that they created to contain the wolf Fenrir were made from several impossible ingredients. From Kvasir’s blood, the dwarves made the Mead of Poetry. It was said that just one sip would give someone complete mastery of the spoken word. They did not hold onto their ill-gotten gains for long. The mead was taken from them by the giant Suttungr, who placed it at the centre of a mountain under the protection of his daughter Gunnlod.

Odin, always covetous of knowledge, decided that he wanted the mead for himself. He travelled to the mountain, tricked his way in, and then seduced Gunnlod in order to gain the opportunity to drink all the mead. He then fled the mountain, chased by Suttungr in the form of a bird. During his flight, Odin let some of the mead fall onto the ground in the world of men. This then became the source of inspiration for mortal poets.

Thus, it seems that the common perception of the Vikings as indulging in a work hard, play hard lifestyle isn’t far from the truth. It was Viking custom to celebrate success and reinforce social hierarchies through rituals that involved a fair amount of drinking.

But this was hardly a daily occurrence. The Vikings did drink daily, but this was not because they enjoyed being drunk. When clean drinking water was not available, beer and ale offered a viable source of hydration. The alcohol that they drank regularly would not have been strong and would have been drunk in moderation.

So, what do you think of Viking drinking customs, and how do you think that modern day Vikings should approach the fine art of drinking?