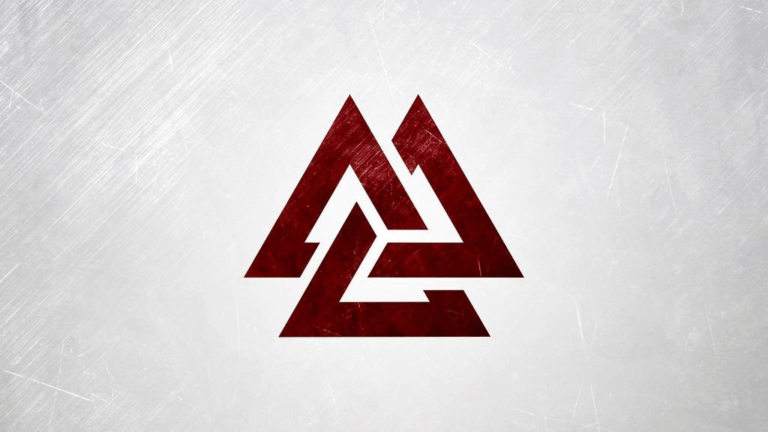 The Viking world was full of symbols. Not only were they a powerful way to express ideas, but the Vikings also thought that symbols had power. As well as expressing the world, the Vikings believed that symbols, when made by the right hands, had the power to shape the world.

One of the most common but enigmatic symbols that the Vikings used was the Valknut. It appears in association with death and burials throughout the Viking world, but none of the surviving literary sources makes mention of it. This means that we have to infer its meaning from what we know about the Vikings in general.

So, what is the likely meaning of the Valknut symbol?

The Valknut symbol involves three interlocking triangles. It is known from the Viking world in two forms. The Borromean form is three interlocking but separate triangles, while the unicursal form is drawn using a single line. It is generally though that these are variations of the same symbol, as archaeologically, they appear in the same contexts.

The name Valknut is not a traditional Viking name, but a modern Norwegian title given to the symbol. It combines the words for slain warrior, “valr”, and knot “knut”, to mean “knot of slain warriors”. This name was chosen as the Valknut appears to be associated with the dead, and with Odin, the god of war and the dead.

The Valknut and the Dead

Examples of the Valknut mainly survive on a number of Viking runestones, and in association with burials. It appears on a pictorial memorial stone found on the Swedish island of Gotland, and on grave goods included in the Oseberg ship burial in Norway, where it is inscribed on a bedpost, and appears on a tapestry, though the surviving image is extremely fragmentary.

Similar symbols also appear on contemporary Anglo-Saxon funeral urns and on the grave goods of some Germanic people closely related to the Vikings, confirming the association between the Valknut symbol and death.

But more than being associated with just death, it appears to have been associated with a warrior’s death, as the Valknut almost always appears alongside images of Odin, or symbols of Odin. Odin was the god of war and was thought to be responsible for granting victory or causing defeat.

The Vikings also believed that warriors who died bravely in battle were taken by Odin’s servants, the Valkyrie, to live in Valhalla, Odin’s hall in Asgard. There they were said to drink, fight and make merry until the arrival of Ragnarok, when they would be called on to fight again, this time alongside the gods in the final battle.

The Gotland memorial stone is the best example of an association between Odin and the Valknut. The stone shows the image of the Valknut above what seems to be a burial mound, and below a raven. Standing nearby is a man with a spear, accompanied by another raven. The man with the spear is almost certainly Odin, carrying his enchanted spear Gungnir. The two ravens are his companion ravens Huginn and Muninn (thought and memory).

Behind the burial mound there is also shown a warrior hanging from a tree. This is another reference to Odin, as the Vikings often sacrificed their enemies to their god of war in this way. This was a reference to the story of Odin hanging himself from Yggdrasil, the Tree of Life, for nine days and nine nights pierced by his own spear in order to gain the knowledge of the runes.

The Valknut and Hrungnir’s Heart

It has also been suggested that the Valknut is Hrungnir’s Heart, a symbol that Snurri Sturluson mentioned in the Prose Edda. He describes the heart as made from stone and having three sharp corners.

This also makes sense within the context of death, and Hrungnir was a spirit of night, winter, darkness and the grave. Nevertheless, most scholars have dismissed this interpretation in favour of an association with Odin.

Several theories have been suggested for the meaning of the Valknut. Some scholars have suggested that it was a symbol for reincarnation, others that it protected the dead soul against evil. The nine points of the triangle have been associated with the nine worlds of Norse mythology, and the three interconnected triangles have been said to reflect the connection between Earth, Heaven and Hell. The symbol has also been associated with ecstatic Seidr magic, of which Odin was a master.

It is my view that the Valknut should be associated with Valhalla, the warrior afterlife where all Vikings hoped to find themselves. The association with not just death, but Odin, points in this direction. I also think that this may have been a symbol that marked the dead as living in Valhalla. But for this purpose, it may also have been a magical symbol used as part of Seidr magic.

The Vikings believed that no matter how noble a life you lived, or how courageous a warrior you were, you had to die in battle to be taken to Valhalla, otherwise, you found yourself in another of the Norse afterlives. To that end, it was not unusual for the Vikings to stab those dying of illness, or place a sword in their hand after death, in order to trick Odin and his Valkyries into thinking that the warrior had died in battle.

With this in mind, the Valknut may have been a symbol that was used as part of Seidr magic rituals to send those that had not died in battle to Valhalla. This may also explain the connection with Hrungnir’s Heart. There is not much known about the other Norse afterlives, and even what we know of Hel is marred by significant Christian influence. But it is conceivable that Hrungnir, as a giant associated with darkness and the grave, had a role to play in taking the spirits of the dead to one of the alternative afterlives. Perhaps the Valknut also acted as a symbol of protection against a visit from Hrungnir.

Today the Valknut has become associated with modern Germanic paganism, but also modern German industry, having been used as a logo by a number of companies, and even used as a symbol of the German National Football Team. The symbol has also been appropriated by some white supremacist groups, but it is not generally considered an offensive symbol like the Swastika.

One of the reasons that the Valknut is so fascinating is that we don’t know exactly what it means, and we are forced to interpret it based on what we know of the Vikings. This means that for modern Vikings, the symbol can carry different, personal meanings. What do you think? What does the Valknut mean to you?