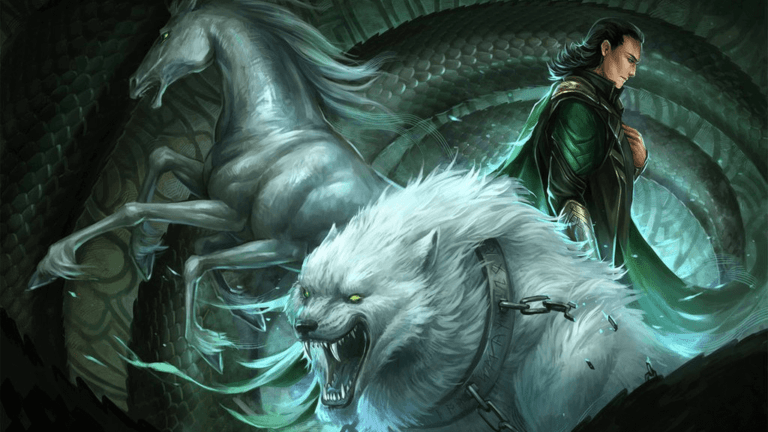 While we might think of Loki as the major villain of Norse mythology, it is actually Loki’s children that are some of the most terrifying and interesting creatures in the Viking stories.

With his Aesir wife Sigyn, Narfi and Vali were also Loki’s children, but their destiny is to pay for the sins of the father. Of course, we also can’t forget that Sleipnir was one of the children of Loki with the might stallion Svathlifari.

Children of Loki and Angrboda

The fearsome giantess Angrboda gave birth to three of Loki’s children, all of which were feared by the Aesir gods on account of their monstrous parentage.

Consequently, the Aesir decided to place each of these children of Loki where they could do the least harm.

The first of Loki’s children with the giantess was the mighty wolf Fenrir, who was so large and strong that no chains could hold him.

Fearing the havoc that Fenrir, and the other children of Loki, might wreak on the nine worlds, the Aesir gods decided to imprison the wolf.

Fenrir was too strong for any of them to overwhelm, so they decided to trick him. They played on his pride and convinced him to put the chains on himself in order to break free as a show of his strength.

Twice the gods forged chains for Fenrir, and twice the wolf broke free with ease. Realising that something more was needed, they approached the dwarves, the master craftsmen of the Norse cosmos, and asked them to create an unbreakable chain.

They made Gleipnir, which resembled a ribbon more than a chain, but was made from impossible things, so it could do the impossible.

One of the children of Loki, Fenrir was intelligent, and suspicious when the gods asked him to allow himself to be tethered by the ribbon.

Fenrir only agreed to do so on the condition that one of the Aesir place their hand in his mouth as a guarantee that they would release him. Only the god Tyr was brave enough to consent, and he lost his hand.

It is prophesied that when Ragnarok arrives, Fenrir will finally break his bonds. He will then rampage across the nine Norse worlds, devouring everything before him, including Odin, the king of the Aesir gods.

Fenrir will eventually be slain by one of Odin’s sons in vengeance, but not before the damage is done.

The second of Loki’s children with Angrboda was Jormungandr, a serpent whose ability to grow seemed to know no limit. Fearing this beast, Odin cast him into the sea surrounding Midgard, the world of men.

There he grew to such a great size that he could encircle the entire world and hold his own tail in his mouth. This earned him the name the Midgard Serpent.

According to the Ragnarok prophecy, Jormungandr dropping his tail is one of the signs of the end of the world. Jormungandr and Thor and destined to slay one another in the final battle.

Thor will kill the serpent, but not before Jormungandr spews so much of his poison onto the god of thunder that he too dies within seconds of his victory. Jormungandr will also spew his poison into the air, poisoning the nine worlds.

The third of the children of Loki and Angboda was Hel, who may seem less monstrous, but is certainly more sinister.

A giantess, it is said that half of her body was that of a beautiful woman, and the other half was that of a corpse. Odin decided that she was well suited to rule over the land of the dead, the place where Vikings who did not die bravely on the battlefield went.

Thus, she was given jurisdiction over this realm, which became known as Helheim in her name.

There Hel bides her time, jealously guarding the souls of her realm until Ragnarok.

When the apocalypse comes, it is said that she will sail to Asgard alongside Loki and at the head of an army of the dishonourable dead, and join the other children of Loki on the battle against the Aesir gods, perhaps seeking vengeance for their monstrous treatment of her family.

Children of Loki and Sigyn

The story of Loki’s children with his Aesir wife Sigyn is more tragic. Loki was responsible for the death of the god Balder, the beloved son of Odin and Frigg.

When they were unable to retrieve Balder from the clutches of Hel, they decided to punish Loki. They chained him to a rock and placed a poisonous serpent above his head to drip its stinging venom onto his face, causing him to writhe in pain for eternity, only relieved by the ministrations of his wife Sigyn.

Vali was turned into a wolf, losing his senses, and tearing his own brother Narfi apart. Narfi’s entrails were then used to chain Loki to his rock. This seems like eye for an eye justice, with the children of Loki killed as payment for the son of Odin.

Child of Loki and Svathilfari

Odin’s eight-legged steed Sleipnir was also one of the children of Loki. Loki was the mother of the horse by the steed Svathilfari.

According to the story, when the world was young and Asgard was still without fortifications, a builder arrived and offered to build the wall of the gods in exchange for the hand of the beautiful goddess Freya in marriage, the sun and the moon. Initially reluctant because of the high price, Loki convinced the gods that they could get the man to build most of their wall without payment if they made the task impossible, giving him just one season, and the help of no man.

The builder agreed, on the condition that he could have the help of his horse Svathilfari.

Svathilfari was such a strong horse that the work proceeded quickly, and it looked like the builder would succeed. Unwilling to pay, the Aesir demanded that Loki do something.

In order to distract the steed and sabotage the work, the shapeshifter Loki took the form of a stunning mare, and lured the steed away. The Aesir gods then not only refused to pay, but killed the builder.

Months later, Loki returned with an eight-legged horse named Sleipnir. He gave the horse to Odin, who adopted him as his steed.

Sleipnir is said to be the fastest and best of all horses, and able to travel between the nine worlds of the Norse cosmos. Sleipnir was treated very differently to the other children of Loki.