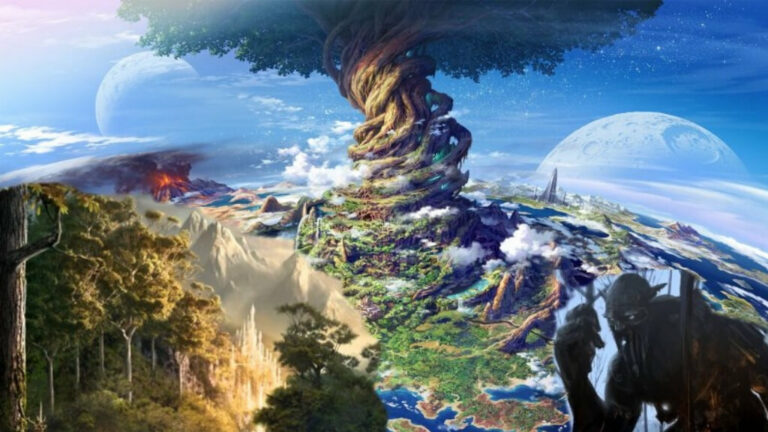 According to Norse mythology, there are nine realms, all of which are nestled in the Tree of Life, Yggdrasil. Unfortunately, all nine realms will also be destroyed during Ragnarok, the end of days.

Read on to discover more about each of the nine realms in Norse cosmology.

Asgard – Real of the Aesir

Asgard is described in the sources as a celestial city with high towers and surrounded by a great, but incomplete, wall. Here in Asgard was Odin’s throne Hildskjalf, from where he could observe everything that happened in the nine worlds. It was also here in Asgard that the apples of youth grow. The Aesir ate these apples to maintain their youth and vigor.

In Norse cosmology, Asgard is where the souls of dead warriors find themselves. The souls of men that die heroically on the battlefield are either taken to Valhalla by Odin and the Valkyries. There they will dwell until they are called to fight again at Ragnarok. They may also be taken to Folkvangr, the realm of the goddess Freya. Freya is one of the Vanir gods, but was sent to live in Asgard as a hostage to preserve peace between the warring tribes.

Asgard is also the location of the Urdarbrunnr, the Well of Destiny. This is one of the three wells that nourished Yggdrasil in Norse cosmology.

Alfheim – Realm of the Light Elves

Alfheim is another heavenly world, ruled over by Freyr, the twin brother of Freya and another of the Vanir gods. It is populated by beings known as light elves. These beings are said to be so beautiful and glorious that they shine more brightly than the sun.

They are also responsible for inspiring art, music and all sorts of creativity, much like muses. Some scholars have suggested that the light elves are similar to our modern conception of angels.

The realm itself is described as being located between the mouths of the Gota and the Glom. It has been suggested that this actually describes a place on the border between modern day Sweden and Norway.

The people who live here are often considered ‘fairer’ than people from other places. While this speculation is probably unfounded, it reinforces the idea that Alfheim is a place of beauty and light.

Helheim – Realm of the Dead

Helheim is a gloomy realm presided over Hel, the daughter of Loki and sister to the Midgard Serpent Jormungandr and the mighty wolf Fenrir. When these three children of Loki were born, Odin knew that they would cause trouble. He placed each of them somewhere he thought that would do the least harm. For Hel, it was this realm beneath the roots of Yggdrasil.

Helheim is the land of the dead. Any Viking that does not die in battle finds themselves here, not just the wicked. Often people placed weapons in the hands of loved ones who died of sickness or old age in order to trick Hel into thinking that they had died in battle.

The dead reach Helheim via a long road called Helveg. It involves crossing a bridge over a raging river flowing with weapons. This leads them to the only gate into Helheim, which is surrounded by strong walls.

Once in Helheim, it is difficult to leave. Even Odin could not pull his divine son Balder out of Helheim. Hel the goddess of death does appear to have the power to release the dead. Odin asked Hel to release Balder, and she agreed to do so, if every being both living and dead would weep for him, proving his universal popularity.

Every creature did indeed weep for Balder, with the exception of a giantess witch, who refused. She is thought to have been Loki in disguise, who orchestrated the death of Balder in the first place.

At Ragnarok, Hel will sail to Asgard with her father in a ship made from the fingernails and toenails of the dead. The ship will be shaken free from its moorings by the earthquakes that herald the end of days. This again suggests that it was not easy to pass out of Helheim. It will only be possible in special circumstances.

Jotunheim – Realm of the Giants

Located beneath Asgard, Jotunheim is the world of the giants. The trickster god Loki is himself one of the Jotun, but lives in Asgard alongside the Aesir. Perhaps he too was sent there as a hostage, as the Jotun are also enemies of the Aesir.

Jotunheim is separated from Asgard by the river Iving, which never freezes over and is incredibly difficult to cross. Nevertheless, the gods are often described as crossing into Jotunheim to complete quests or procure themselves a giantess lover. Odin passes into Jotunheim to consult with Mimir, the wisest of all beings, who lives at Mimisbrunnr, the Well of Wisdom, and the second of the wells that feed Yggdrasil.

Jotunheim is considered a land of chaos beyond all law and order. The normal rules of the universe did not apply there. On one occasion Thor travelled there to the stronghold of the giant Urgada-Loki. He was warned before setting out on his journey that nothing he saw would be as it seemed, and at the end of the story everything mysteriously disappeared.

Midgard – Realm of the Humans

Midgard is the ream of men, created by Odin and his two brothers Veli and Ve. They made the first man, Ask, and the first woman, Emlba, from the ash and an elm tree, and these two went on to give birth to all mankind.

However, seeing how helpless their creations were, Odin and his brothers created Midgard to protect them from the giants. Asgard is directly connected with Midgard by a rainbow Bifrost bridge, allowing the gods easy access to this realm of which they are cartakers.

Located somewhere around the middle of Yggdrasil in Norse cosmology, Midgard is described as circular, and surrounded by a deep sea that is impassable. This is where Odin placed Loki’s son Jormungandr, who is so large that he circles Midgard entirely and grasps his own tail.

Like all the nine worlds, Midgard will be destroyed as part of Ragnarok. Jormangandr will rise from the sea, causing the water from the sea to cover the land, and he will cover land and sea with his deadly venom.

Muspelheim – Realm of Fire and Chaos

Muspelheim, along with Nilfheim, was the oldest of the Norse worlds in Norse cosmology. It was a world of primordial fire filled with lava, flames and soot, and also home to the fire giant Sutr.

The earthquakes the rock the nine worlds ahead of Ragnarok will allow Surt to leave his realm and lead an attack on Asgard, turning the realm of the gods, and all the worlds, to ash with his burning sword.

Svartalfheim – Realm of the Dwarves

Svartalfheim is located below Midgard, far beneath the earth where its inhabitants prefer to dwell. It was a dark world, and the world Svartalfheim means ‘dark fields’ in Old Norse.

The dwarves live underground in amazing halls lit only by the fires of their forges and torches. It is in the forges of Svartalfheim that the dwarves crafted the most important weapons in Norse mythology including Odin’s spear Gungnir and Thor’s hammer Mjolnir.

Niflheim – Realm of Ice and Mist

Along with Muspelheim, Niflheim is the oldest of the nine worlds in Norse cosmology, and is a primordial world of ice, mist and snow, inhabited by ice giants.

It was a mixing of the freezing air of Niflheim and the burning air of Muspelheim that created the primordial goop from which emerged Ymir, from which the race of giants sprang and from whose corpse Odin and his brothers created much of Norse cosmology.

The eldest of the three wells that nourished Yggdrasil is also located here, Hvergelmir, protected by the dragon Nighug. All cold rivers are said to flow from this stream, and it is the source of the eleven rivers of Norse mythology.

Vanaheim – Realm of the Vanir

Vanaheim is the world of the Vanir gods (see our full post on Vanaheim), the lesser deities in Norse mythology. They warred with the Aesir in the past, and exchanged hostages to maintain the peace.

It seems that the two races probably went to war because the Vanir engage in practices the Aesir disdained, including incest and forbidden types of magic.

The Vanir world is not described in any of the surviving sources, but it is assumed to be a fertile land of magical delight, as all the Vanir gods we know about are fertility deities and sorcerers.