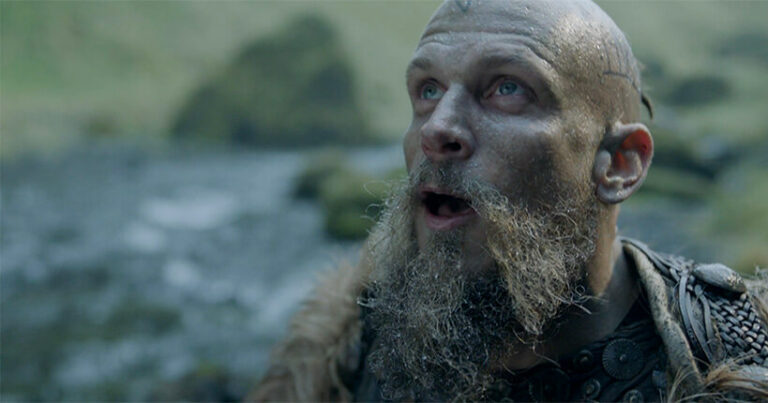 Modern culture has very firm ideas about what the Vikings looked like, well encapsulated by their presentation in the show Vikings. Tall, blonde, burly, with long beards and a bit dishevelled from their hard life as warriors.

On television Viking style includes hair adorned with braids and beads, eyes covered in warrior’s kohl, and faces marked by battle scars. We imagine them as a fearful race! How to be like a real viking ?

Thanks to the survival of a large number of Viking skeletons from across Scandinavia and the Viking territories, we actually know quite a lot about the stature and size of the Vikings.

Most of us imagine the Vikings as towering, like modern Scandinavians, and strong, like they are presented in modern popular culture. However, if you encountered a Viking today, you would probably consider them quite short. The average Viking male was around 172 cm tall (5.6 ft), and the average female 158 cm (5.1 feet).

However, while today we would consider them on the short side, at the time, they still probably towered over many of their contemporaries. Britons living in around AD 1,000 would have been a good 5 cm shorter than the Vikings. This is largely down to their comparatively good diet for the time.

People who came into contact with the Vikings often commented on what they looked like, especially their stature and size. Arab traveller Ibn Fadlan stated that: “I have never seen more perfect physical specimens, tall as date palms and ruddy.”

Their additional statue would have enabled them to carry more muscle than their shorter contemporaries, and the hard life as a warrior or a farmer in the cold Nose climes probably meant that the were quite well built.

Surviving skeletons also allow for the reconstruction of Viking facial features and what the Vikings looked like. Though these reconstructions are less accurate and more open to interpretation than height and size.

There was almost as much variation among Viking faces as there is among modern Norse faces. The Vikings had a lot of contact with other cultures, contact that often resulted in offspring. They would have had less extensive and widespread foreign contact than their modern ancestors, but there was certainly no ‘pure’ Viking bloodline. Nevertheless, modern Scandinavians faces probably resemble what ancient Viking faces looked like more closely than anyone else living today.

The result of this is that it is often difficult to distinguish between the skeletal remains of Viking men and women based on the skull alone, and archaeologists must look at height and pelvis to determine gender. [Women’s pelvises differ from men’s in order to allow for child birth].

We also generally think of long blonde locks and beards as the quintessential Viking style.

Genetic studies confirm that it is not true that all Vikings were blonde. There was a mix of blondes, redheads and dark-haired Vikings. However, it is true that blonde hair was considered particularly attractive, and many darker haired Vikings bleached their hair blonde using Lye soap.

There was also no uniform Viking style for hair or beards. The Vikings certainly had fashions, but these changed depending on the location and the time, and there were always trendsetters, traditionalists, and those that did their own thing.

Viking men did generally wear beards, often long, but sometimes short [link to bead article]. Surviving Viking depictions of men and gods (all the male gods, with the exception of Loki, appear to have had beards) show a variety of beard styles from long and flowing or braided to short goatees or just moustaches.

Regardless of how they wore their beards, it is clear that a beard was an important part of the Viking style. In the Norse sagas many people had a nickname based on the style of their beard, such as Silk Beard, Fork Beard or Gold Beard. It also seems that not having a beard was problematic, as in another saga the hero Brunt Njal is mocked as being a beardless old man.

Men and women both wore their hair long, though it seems that men did sometimes cut or shave their heads at the back to create a kind of reverse mullet. Both men and women were in the custom of adorning their hair with beads and other decorations. Both would also tie their hair back, often at the base of the skull, for work, or fighting.

In modern popular culture the Vikings are often depicted as dirty due to their tough, warrior lifestyle, but they were probably cleaner than many of their contemporaries.

“They has also conquered, or planned to conquer, all the country’s best cities and caused many hardships for the country’s original citizens for they were – according to their country’s customs – in the habit of combing their hair every day, to bath every Saturday, to change their clothes frequently and to draw attention to themselves by means of many frivolous whims. It is in this way that they sieged the married women’s virtue and persuaded the daughters of even noble men to become their mistresses.”

Wallingford’s description of Viking style, grooming and hygiene practices is supported by a variety of other sources.

Archaeological investigations have retrieved a wide range of grooming instruments including tweezers, combs, nail cleaners, ear cleaners and toothpicks. Combs were probably one of the things that men and women carried with them at all times in the pouches that they carried on their belts.

That ‘letting yourself go’ and neglecting to bathe and groom yourself was considered poor behaviour among the Vikings is also reinforced by a story about Odin. He was so distraught after the death of his son Balder that he refused to wash or comb his hair in grief. This is clearly depicted as a break with all expected social norms.

Wallingford’s statement that Vikings bathed once a week also has some support in the Viking name for Saturday, ‘Lordag’, which comes from the Nordic word ‘laugardagur’, which means washing day.

The Arab Ibn Fadlan did describe the Vikings as dirty, but he was a Muslim from a culture accustomed to washing five times a day for prayer. In his account of the Vikings living on the Volga River, he describes how a slave woman brought a bowl of water to her master every morning, which he used to wash his hands hair and face. However, he also says that the final thing that this master would do was blow his nose and spit into the water, and that this water would then be used by other to clean themselves. That does sound pretty disgusting.

He also suggests that the Vikings wore make-up to make themselves look younger and more beautiful, in particular eye kohl. He says that: “there is also an artificial make-up for the eyes, when they use it beauty never fades, on the contrary it increases in men and women as well.”

While eye kohl remains popular today, some Viking beauty practices may seem less familiar and stranger. The Vikings were also in the practice of filing horizontal lines in the enamel of their front teeth, which they would then pain with red resin.

The Vikings gave great care to the bodies, so it is little surprise that they also paid a lot of attention to what they wore. But for Viking style clothing read our previous blog post about the history of Viking clothing.

Despite depictions of Odin as an older man in the modern Marvel movies, it is difficult to picture an older Viking, as we imagine them dying in their prime on the battlefield.

The average life expectancy for Viking men was around 45 years, while for women it was 38 years, significantly lower due to the increased likelihood of dying in childbirth. But low life expectancy does not mean that no one lived until a ripe old age. High infant mortality significantly brings down life expectancy. While 50 would have been considered old among the Vikings, there would have been Vikings that lived to the ripe old age of 60 or 70. One of the women buried in the Osenberg Ship burial is estimated to have been between 60-70 years old, and badly afflicted with arthritis.

The elderly would have lived in the home with their children, who cared for them in their old age. It was normal for Viking homes to house ‘grand families’ that included multiple generations of an extended family.

Sadly for the elderly, even if they passed the prime of their lives as fearless warriors, if they did not die in battle, they would not be taken to Valhalla to live with other warriors until the coming of Ragnarok, but pass their eternity in Helheim.