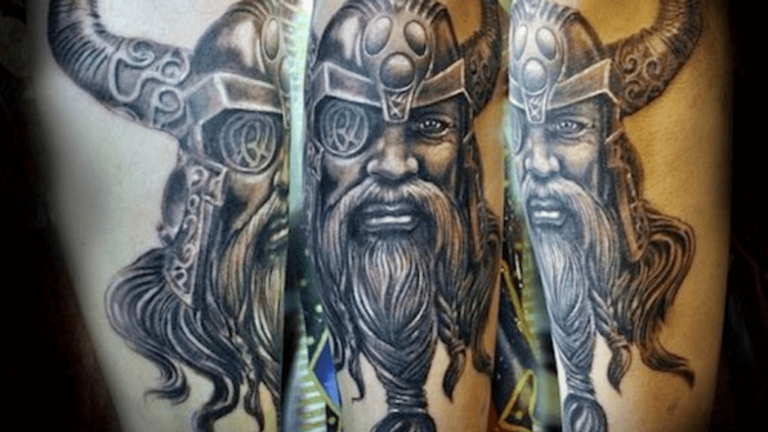 Looking for the perfect new Viking tattoo for you?

The Vikings relied heavily on symbols to communicate their faith and beliefs. They wore them as amulets, carved them into buildings and on stones as marks of protection, and added them to images to create additional layers of meaning. They even believed some of their symbols to be magical.

Let’s take a look at some of the most important and interesting Viking symbols, which might make the perfect tattoo for any modern Viking.

Mjolnir, Thor’s Hammer, is probably the most iconic Viking tattoo.

Mjolnir was a very common amulet used among the Vikings as a symbol of protection and as a mark of allegiance to the Norse religion.

More Mjolnir amulets survive in the archaeological record than all other amulets combined, and it was the only symbol that continued to be used well into the Christian period as a sign of continued belief in the old ways.

Sacred to the god Thor, it represents both the protection of the god, who used his hammer to smash the giants, and also the aspiration of all warriors, as Thor was the ideal warrior.

How many people have you seen with tattoos in Chinese characters? How about the Viking runes ?

The Vikings believed that the runes were much more than just an alphabet. For those who knew how to use them, they also have the power to shape the world.

Many of the heroes in the sagas are described as runemasters that used their knowledge to help others.

Each rune represents both a phonetic sound and an abstract concept, so you can choose a rune that speaks to use.

Or choose one of the words that were commonly used in Viking inscriptions, such as ALU, which probably means protection.

Some of these symbols have come down to us today through a group of 18th century Icelandic grimoires.

The most well-known of these symbols must be Vegvisir, also called the Helm of Awe.

Warriors would draw the symbol of their foreheads before battle to invoke the protection of the gods.

It suggested that the warrior could be sure of victory, either defeating his enemy, or being taken to Valhalla.

The second most well-known Viking magical symbol is Vegvisir, also known as the Norse Compass.

This was a wayfinding symbol, and according to the grimoires, anyone who used the symbol would never lose their way, even if they don’t know where they are going.

Among modern Vikings, it has become a popular symbol for invoking guidance, both physical and spiritual.

The Valknut, a symbol of three interlocking triangles, is found in many artworks surviving from the Viking period, always in association with Odin and the dead.

For this reason, it is believed to be the symbol of Valhalla, the hall of Odin in Asgard where warriors that died bravely in battle were taken, until they were called on to fight again alongside the gods at Ragnarok.

There is some evidence that the Vikings used the symbol both to indicate that a fallen warrior was in Valhalla, and to call the Valkyries to take the fallen to Valhalla, while simultaneously preventing other deities from taking the spirit of the dead to an alternate afterlife.

It has become a symbol that represents the fearlessness of Viking warriors, because death is not the end.

While Thor might be the most well-known of Viking gods today, Odin was the most powerful Viking deity.

The king of the Aesir gods and the all-father, he was the god of war, wisdom, witchcraft, and death.

The Triskelion, a symbol of three interlocking horns, is thought to be a symbol of Odin as the god of wisdom and cunning.

It references the story of Odin tricking his way into a stronghold of the giants in order to drink the Mead of Poetry, which was stored in three giant horns.

This gave him complete mastery of the spoken word, which he then shared with some of mankind.

Huginn and Muninn, two ravens, are also associated with Odin, this time in his guise as the god of wisdom and as all-seeing.

These two ravens, whose names mean “thought” and “memory”, were the servants of Odin, who would send them out across the nine worlds of the Norse cosmos as his eyes and ears.

Seeing ravens generally meant that Odin was in the vicinity.

It was a good sign to see ravens flying over the battlefield, as it meant that Odin was there to take the dead to Valhalla.

Yggdrasil is the mighty tree that sits at the center of Norse mythology.

The Vikings believed that the nine worlds that made up the cosmos were all tucked away in the branches and roots of Yggdrasil, the world tree.

The tree both connects the worlds, and keeps them apart, ensuring that the beings that live in the individual worlds did not spill over into one another.

It is a symbol of the interconnectedness of all things, and that everything has its place within the universe.

The Ouroboros is a common symbol in many cultures, but among the Vikings, it was linked with Jormungandr, the Midgard Serpent.

He is one of the children of Loki, who was so feared by the gods that they cast him into the waters that surround Midgard.

There, he grew to such an enormous size that he could encircle the whole world and hold his own tail in his mouth.

It is foretold that Jormungandr will only drop his tail when Ragnarok, the end of the world, arrives.

He will then emerge from the water and fight to the death with Thor. Thor will kill Jormungandr, but not until he spews so much venom onto Thor that he dies as well.

Jormungandr will also spew his venom into the atmosphere, poisoning the cosmos.

The Ouroboros has become a symbol of the powerful forces of fate, which cannot be avoided, but must be faced with courage.

The troll cross is a symbol known from Swedish folklore that was used to ward off malevolent magic.

While no ancient examples of the symbol survive, smith Kari Erlands popularised metal amulets of the swirling symbol, which she claims to have copied from a protective rune that she found on her parents’ farm in Sweden.

The Web of Wyrd is a web of lines that can be traced to form many of the Viking runes.

It is said that the Norns, the Norse fates, carved webs like this into the bark of Yggdrasil to write the destiny of men.

The symbol represents the connectedness of all things, and the way past actions impact the present and the future.

What do you think? Which of these Viking symbols makes the best Viking-style tattoo?