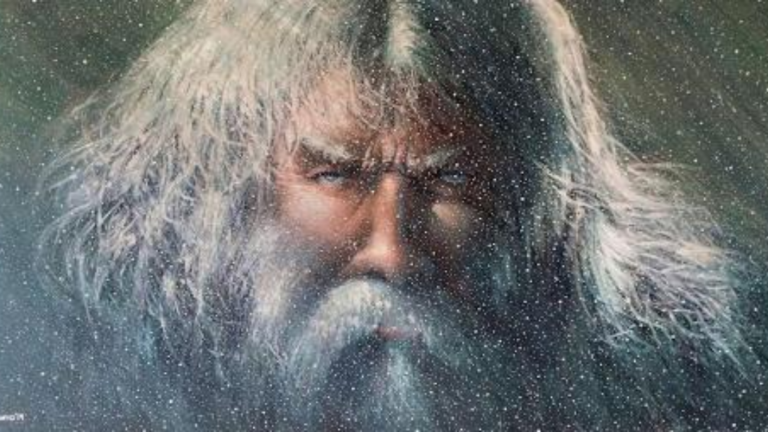 Ullr is one of the Viking gods that didn’t make it into the Marvel cinematic universe. But, while he is among the lesser-known gods, he seems to have been a very important Norse god, in both pre-Viking and Viking times.

The son of Sif and stepson of Thor, he was a god of winter, skis, archery, hunting, combat, and vows. Like most of the Norse gods, he was an extremely complex being, made more complex by the fact that so little information survives about him.

Read on to discover what we do know about Ullr.

Ullr was an all Norse god who predated the Vikings, but also had a place in Viking religion and mythology.

His name, pronounced “Ool”, comes from the Old High German word “wuldor”, which means glory, and means glorious or dazzling. This may be linked to the fact that he was described as having a “fair aspect”, as Balder is also described as being so beautiful that he shines.

Like most of the Norse gods, the domains that were considered to belong to Ullr were various and overlapped with that of many of the other gods.

Ullr was a god associated with the winter wilderness and linked with snowshoes. It was said that no one could catch him on the snow. He is also described in one passage as crossing water on magical bones, which has been taken as a metaphor for crossing over a frozen lake on skates.

He is also linked with skis, which were invented in Scandinavia about 6,000 years ago, and he is still popular among modern Scandinavian skiers.

Ullr was also a god of hunting. He had a hall in Asgard which was called Ydalir, which means Yew Grove, linked to the idea that yew was the best wood for bows, though they were also made from ash or elm. The Vikings primarily associated the bow with hunting, although they were also used in battle.

The majority of Viking bows were of longbow style and measured between 1.6 and 2 metres long. The estimated draw weight of a Viking bow was 90 pounds.

Ullr was also considered by the Vikings to be extremely accomplished as a warrior, and especially single combat. In fact, it was Ullr that the Vikings would invoke for good luck before participating in a duel.

The Vikings called single combat “Holmgang”, and it was considered a legally recognized way to settle disputes. In theory, you could charge anyone regardless of social status. Not to turn up for a duel was to sacrifice one’s honor, though the weak and infirm could have a warrior fight on their behalf.

Perhaps linked with the idea of Ullr as an expert warrior, he was also linked with the Viking shield. In fact, shields were often referred to as Ullr’s ship. There is some speculation that this may have been a reference to him using a shield-shaped object as a sled. Though this may be doubted as the Vikings did have a more sophisticated sled design.

There are also references in the surviving Skaldic verse to being swearing oaths on rings sacred to Ullr.

This is reinforced by a shrine to Ullr found in Lilla Illevi in Sweden. 65 rings were excavated from the shrine. These rings were probably used to swear oath, and then buried in the sacred ground of the god.

The only thing that we know for certain about Ullr is that he was the son of Sif, the fertility goddess who was the wife of Thor. But he is not the biological son of Thor, as he is always described as Thor’s stepson.

There are a few theories about who Ullr’s father could be. Some scholars suggest that he may have been the son of Aurvandil, a mortal who accompanied Thor to Jotunheim. But during the journey Aurvandil lost a toe to frostbite, so Thor cast it into the sky and made it a star. Others suggest that his father may have been among the Vanir gods since he is associated with nature and the hunt.

We also do not know if Ullr had a wife or children. Again, some suggest that he may have been linked with Skadi, the giantess who was associated with winter and the hunt. But the German version of Ullr, Holler, was married to the goddess Holda, a wife and matriarch goddess that more closely resembled Odin’s wife Frigg than any other goddess.

Since Ullr was associated with the wilderness and the idea of living rough in the cold, be may, of course, have been an eternal bachelor.

He is, however, described in one source as a flirt, and also an excellent lover.

We know so little about Ullr that we often do not consider him when talking about the important Viking gods. But there is good evidence that Ullr was considered very important, and probably one of the older gods.

First and foremost, his name appears as part of many Norwegian and Swedish place names, but not place names in Denmark and Iceland. This lends support to the idea that Ullr was an older god that was popular before the Vikings, as Iceland was only colonized during the Viking era.

His importance is also suggested by the fact that Saxo Grammaticus included Ullr in his 12th-century Gesta Danorum, which cast the god in the role of heroes.

In the story, he appears as Ollerus, who was chosen to replace Odin as king for ten years when Odin was exiled for rape. This may be a metaphorical reference to a time when Ullr was among the most important gods, even greater than Odin. The story describes this as an interlude, since Odin was considered an old god, involved in creation, and then came to prominence again after Ullr.

So, what do you think of Ullr? Is it any surprise that Vikings living in the harsh, cold climes of Scandinavia would have venerated such a god? Why do you think so little is known about him today and that he does not feature in the majority of surviving stories about the Norse gods?