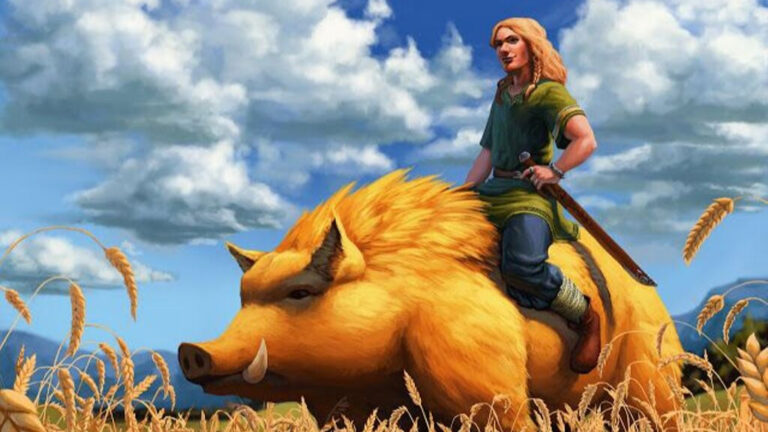 Norse mythology is full of incredible creatures and fantastical treasures.

The golden boar Gullinbursti, which belonged to the god Freyr, was both a beast and a treasure, and the fylgia of the god Freyr.

What did the strange entity Gullinbursti represent to the Vikings?

Freyr: God of Fertility and Virility

Norse mythology features two races of gods: the war-like Aesir, including Odin and Thor, and the more esoteric, nature-loving Vanir, who included both Freyr and his sister Freya among their number.

The twins were sent to live in Asgard as hostages after the Aesir-Vanir war, and were quickly accepted among the Aesir. In fact, it seems that Freyr was one of the most enthusiastically generated gods among the Vikings.

While he lived among the Aesir, he was also given dominion over Aldheimr, the realm of the elves, though what exactly that meant for the god has not survived.

Freyr was a fertility god, responsible for sunshine and rain, virility and prosperity, and able to bestow peace and pleasure on mortals. He was considered to provide abundance, but also protection, and he was often represented by an erect phallus, or his golden boar, Gullinbursti.

Gullinbursti was one of the six treasures procured by Loki from the dwarves in the aftermath of a prank he played that involved cutting off the beautiful golden hair of Sif, the wife of Thor. More than simply cutting her hair, he removed every strand so that it would never grow back.

An enraged Thor demanded that Loki, the trickster god replace the hair with something equally beautiful, or face the consequences.

In order to save his skin, Loki ventured to Svartalfheim, the realm of the dwarves, the master craftsmen of Norse mythology. There he approached the dwarves known as the Ivaldi brothers, who agreed to make a headpiece for Sif out of fine strands of gold, and enchant the wig to grow on her head as if it were her own hair.

They also agreed to make two further treasures to help Loki appease the gods: Gungnir, the spear of Odin, and Skidbladnir, a magical ship that was given to Freyr. The ship was big enough to carry all the gods and their steeds in full armor, but could also be folded down and carried in a pouch when not in use. The ship was also enchanted to always have a fair wind.

While in the realm of the dwarves, Loki could not help but get into a little more mischief. He also approached another pair of dwarven craftsmen, Sindri and Brokkr, and told them of the treasures that the Ivaldi were making for the gods.

He said that everyone knew that the Ivaldi were the finest craftsmen in Svartalfheim, and he challenged Sindri and Brokkr to make three finer treasures. The pair agreed to the deal, but on the condition that if the gods judged their treasures better, they take Loki’s head. Loki agreed, and then went about trying to sabotage the work of the pair.

Sindri and Brokkr made Draupnir, the ring of Odin, Mjolnir, Thor’s hammer, and Gullinbursti. The golden boar Gullinbursti was made from a pig’s skin and thousands of pieces of golden wire, worked in the incredibly hot furnaces of the brothers.

Sindri and Brokkr won the bargain, with the gods agreeing that Mjolnir was the finest treasure ever made, despite having an unusually short handle thanks to the distractions caused by Loki.

When Brokkr went to take Loki’s head, the trickster responded that he had promised his head, but not his neck, and that they could not very well have one without the other. Brokkr had to satisfy himself with sewing Loki’s mouth shut. Both Gullinbursti and Skidbladnir were given to Freyr, while Odin received Gungnir and Draupnir, Thor Mjolnir and Sif her golden hair.

It cannot be known whether Gullinbursti was an existing attribute of Freyr that was added to the story of Loki and the dwarven treasures to explain its origin, or if the origin story of Gullinbursti and the other treasures came first.

The association between the god and the golden boar Gullinbursti does seem to be old, as archaeologists have found a seventh-century helmet decorated with a golden boar, presumably Gullinbursti, at Benty Grange in Derbyshire, England.

It seems that Freyr and his golden boar Gullinbursti were closely linked, and Gullinbursti was the primary attribute of the god. While Gullinbursti was regularly used to represent the god, the same is not true of his other treasures, the ship Skidbladnir, and a magical sword that had the power to fight on it own.

Warriors would often place images of Gullinbursti on their helmets and shields. Gullinbursti was probably more a symbol of luck than protection. Freyr was a god of abundance, and may have been called on to reward warriors with copious booty. Gullinbursti may also have been a symbol of courage, as boars are notoriously fierce.

Gullinbursti, which means Golden Mane or Golden Bristles in Old Norse, was said to shine so brightly that it could illuminate even the darkest night. Gullinbursti could also run through the air and over water, and was better than any horse.

Either way, Gullinbursti was an appropriate symbol for Freyr as one of the Vanir gods, as the Vanir were considered more wild and unpredictable than the Aesir, and boars were famously unpredictable.

His sister Freya was also associated with the animal, and was accompanied by her own boar Hildisvini. The golden color of Gullinbursti was no doubt a reference to Freyr’s role as a god of sunshine, wealth and abundance.