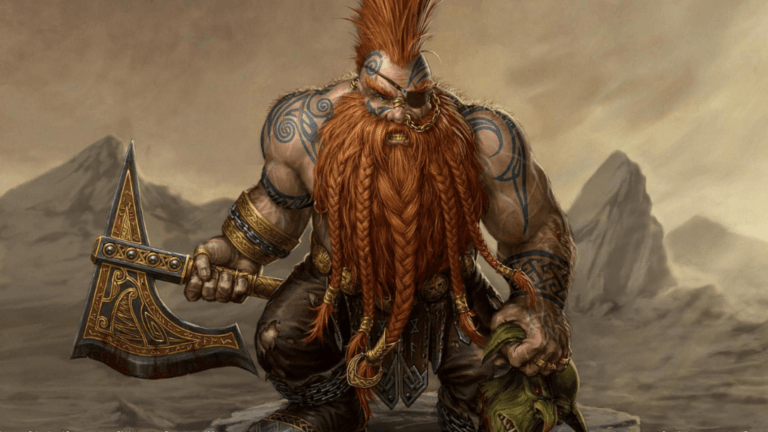 If you imagine the dwarves of Norse Mythology as something out of a Tolkien novel, you would not be far off the mark. Tolkien was inspired by the Norse mythology, which describes dwarves as master blacksmiths that dwelled underground in great cavernous mines that fuelled their work.

Read on to find out more about Norse dwarves and the important role that they played in the stories of Norse mythology.

Find out more about some of the dwarves in Norse mythology stories.

According to Norse cosmology, the dwarves were born from the body of the primordial giant Ymir, killed by Odin and his two brothers, who then used his body to shape the world.

Some stories describe dwarves emerging from Ymir’s dead body like maggots. Other sources suggest that they were made from the blood of Brimir [fire] and the bones of Blainn [death], both sometimes considered alternative names for Ymir.

These early beings were an integral part of Norse cosmology, with four dwarves, Austri, Vestri, Nordri and Sudri (East, West, North and South), holding aloft the four corners of the sky with their colossal strength.

Norse dwarves also have thing in common with Tolkien’s trolls. In one story the dwarf Alviss goes to visit Thor, who has promised him his daughter Thrud’s hand in marriage. Thor does not wish to honour his promise and so asks the dwarf to prove his wisdom to claim his prize. Thor quizzes Alviss for a full night until sunrise. The dwarf, distracted by Thor’s questions, does not notice the coming light and is turned to stone by the sun’s rays.

Treasures Made by the Dwarves

Svartalfheim is described as located beneath Midgard, the realm of men, again associating dwarves with ideas of deaths. It is depicted as a vast underground world of caves, lit only by the mighty forges that the dwarves use as the best blacksmiths in the Norse world.

The dwarves were not only blacksmiths, but also magic wielders, and fashioned all of the enchanted weapons owned by the gods. These weapons were mainly procured by Loki. The first round of weapons were procured when Loki, as a joke, cut off the golden hair of Sif, Thor’s wife.

An enraged Thor demanded that Loki find a way to replace the hair. Loki went to two dwarven brothers known as the sons of Ivaldi and asked them to make Sif a wig from finely spun gold, and to enchant the wig to have the magic ability to grow on her head.

Loki also convinced the brothers to make additional gifts to appease the other gods for his behaviour. The brothers made Sklidbladnir, a ship that was gifted to the god Freyr and was enchanted to always have a fair wind and to sail on air as well as on water. It was large enough to hold all the gods with their mounts at the same time, but could also be folded down and kept in someone’s pocket. Loki also procured Gungnir, a mighty spear for Odin that was enchanted to always hits its mark, regardless of the skill of the wielder.

Loki was so pleased with the items that the brothers made that he declared them the best of all smiths. Two other dwarven brothers, Brokkr and Eitri, overheard this and wagered with Loki that they could make three presents for the gods of equal excellence to those of the Ivaldi. Loki agreed to the wager, staking his own head.

While Loki tried many things to sabotage the dwarves, they did indeed create three amazing treasures. They made Gullinborsti, a boar with golden hear so bright that it turned night into day wherever the bore ran. This too was eventually given to Freyr, and it could run faster on land, water and air than any horse. They also made Draupnir, a ring of immense beauty that also possessed the magic to replicate itself eight times every ninth day. Finally, they made Mjolnir, which had the power to level mountains and became the weapon on the god Thor.

Loki tried to steal these weapons and take them back to Asgard alone, but Brokkr and Eitri followed him there and demanded payment for their work. The gods agreed that the treasures were at least as the original treasures, and that Loki must pay the required price. Loki tries to get out of the agreement by telling the dwarves that he had promised them his head, and not his neck. The dwarves settle for sewing Loki’s mouth shut.

Loki was not the only Norse god to solicit treasures from the dwarves. The gods asked the dwarves to create Skidbladnir, a light but strong chain to bind the great world Fenrir when nothing else would. The goddess Freya also agrees to spend a night each with four dwarves, Alfridd, Berling, Dvalin and Grerr, in exchange for the necklace Brisingamen, the most beautiful known in the Norse world.

Other Dwarven Stories from Norse Mythology

Dwarves feature in a number of other Norse myths, often featuring lessons about the price of greed.

For example, the dwarf Andvari lived under a waterfall, and had the power to turn himself into a pike in order to guard and protect the many treasures that he hid there. This included a beautiful ring known as Andvaranaut. Loki borrowed a net from the goddess Ran in order to catch Andvari as a pike and steal his treasure, including the great ring. Andvari managed to escape, but before fleeing to the mountains, he cursed the ring that it will always bring death and sadness to whoever possesses it.

In another story, Loki gives the ring to the dwarven king Hreidmar in compensation for accidentally killing one of his three sons. Of course, this passes the curse to Hreidmar, who is killed by his remaining to sons Fafnir and Regin in their desire to possess the ring (I think we are seeing some more Tolkien inspiration here).

Fafnir then turns himself into a dragon in order to keep the ring for himself and not share it with Regin. Regin sends his adopted son Sigurd to slay the dragon Fafnir and bring him the ring, with the intention of then killing Sigurd to prevent him also desiring the ring. But Sigurd is warned of his adopted father’s plan, and kills him instead.

In a slightly less grim myth, the dwarven brothers Fjala and Galar killed the giant Kvasir in order to gain his wisdom, turning his blood into the mead of poetry. They are forced to give the mead to the giant Sutting in payment for killing his parents, two other giants. Sutting then hides the mead in a mountain, with his sister Gunnlod guarding it inside the mountain, and his brother Baugi guarding it outside the mountain.

Odin, desirous of this knowledge, works for Baugi for a full summer, and then asks for a taste of the mead. Baugi agrees, drilling a small whole into the mountain so that Odin can taste the mead but can not get near it. But tricky Odin turns himself into a snake, enters the mountain, convinces Gunnlod to let him taste the mead, drinks the whole thing and escapes. One of Odin’s many daring quests for wisdom.

The Dwarves and Ragnarok

While it is clear that dwarves were an essential part of the universe of Norse mythology, one place where they are glaringly absent is the Ragnarok prophecy.

The only mention of the dwarves in relation to Ragnarok is in a stanza of the Voluspa in between the stanza when Heimdall blows his horn to call everyone to the last battle, and the stanza that recounts the death of Odin. They are described as masters of ricks roaring loudly while standing by doors of stone. This may suggest that they joined the gods of Asgard in the final battle, but really, their fate is unknown.