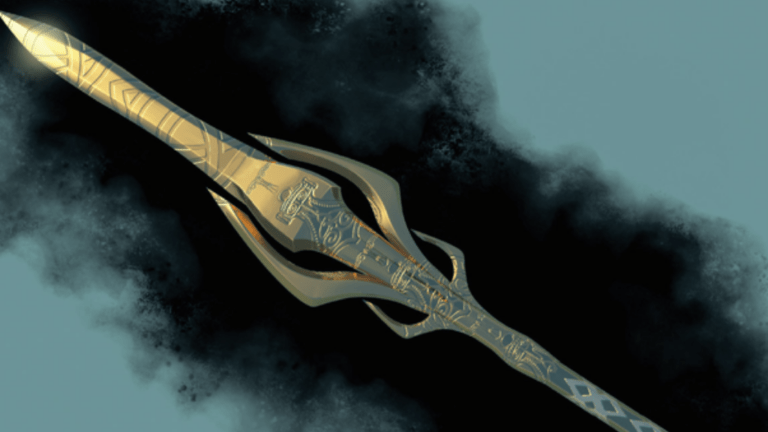 Norse mythology is full of mythical objects and weapons owned by the gods and heroes.

While the most well-known of these objects must be Mjolnir, Thor’s Hammer, arguably the most important was Gungnir, the spear of Odin. Odin was the king of the Norse gods, as well as the god of war and wisdom.

His spear was associated by the Vikings with war, kingship and knowledge. Read on to learn more about the origins, powers and significance of Gungnir.

Gungnir, which means ‘swaying’ in Old Norse, belonged to Odin, and was made by the dwarves, the master craftsmen of Norse mythology. According to one story, the dwarves made the spear for Odin specially, and forged it from sunlight. According to another story, Loki procured the weapon for Odin.

In this second account, Loki cuts of the beautiful golden hair of Thor’s wife Sif, and is forced to go to the realm of the dwarves to find something as beautiful to replace the hair. He approaches a group of dwarves known as the Ivaldi brothers, who agree to make a headpiece of fine gold for Sif, and enchant it to grow on her head.

The story suggests that while Loki is there is either sees the spear and requests it from the dwarves as a gift for Odin, or specifically commissions them to make a treasure for Odin. This second story would tie up with the idea that the spear was specifically forged for Odin from sunlight.

Of course, while in the realm of the dwarves Loki gets up to his usual mischief and he also comes home with Mjolnir for Thor and Gullinbursti for Freyr among other treasures, and ends up with his mouth sewn shut.

When Loki presents the spear to Odin he tells him that it is so well balanced that it will never miss its target, regardless of the skill of the warrior wielding it, and that oaths sworn on the spear can never be broken.

Depictions of the spear suggest that it was also engraved with runes. Although it is not specifically noted anywhere, these were probably designed to enhance its aim and deadly force.

While swords were more prestigious than spears, and today we associate the axe with the Vikings, the spear was the most commonly used weapon among Viking warriors. Therefore, it is no great surprise that the god of war carried a spear. The archaeological record suggests that many Norse warriors carved runes on their own spears, in imitation of the god.

Gungnir in Mythology and Viking Culture

Gungnir is one of the most commonly mentioned objects in Norse mythology, and the use of Gungnir in these stories is then reflected in Viking ritual practices.

According to the Norse stories, in the early days the Aesir gods went to war with the Vanir gods, the second race of gods in the Norse pantheon. This was probably because the warlike and orderly Aesir objected to some of the more esoteric and decadent practices of the Vanir, including brother-sister marriages.

It is said that before the great battle, Odin threw his spear over the heads of the Vanir crying ‘Odin Owns You All’. The two races of gods eventually made peace and hostages were exchanged. Freyr and Freya were among the Vanir gods sent to live in Asgard, and they were quickly accepted as part of the community (though their brother-sister marriage was dissolved).

Referencing this myth, it was the practice of some Viking warriors to throw their spears over the heads of their enemies before battle, and cry the same words. This was done in order to invoke the assistance of Odin in the battle to come.

Seeking Knowledge of the Runes

As well as being the god of war, Odin was the god of wisdom, and he was known to be willing to go to great lengths in order to obtain it, even sacrificing his own eye. On another occasion, he hung himself from Yggdrasil, the tree of life, for nine days and nine nights while pierced by his own sword in order to gain knowledge of the runes. He then shared this knowledge with mankind.

In reference to this legend, whenever the Vikings sacrificed a person to Odin, they used a spear, sometimes in combination with hanging and sometimes alone.

The Vikings believed that many warriors who died bravely in battle were taken by Odin to Valhalla, in order to live until they are called on again to fight alongside the gods in the final battle of Ragnarok.

In the Ragnarok prophecy, Odin is described as leading this troupe of warriors into battle with Gungnir in hand. He then uses the spear to attack Fenrir, who kills Odin as the world ends.

While this moment is not reflected in any Viking practices, it is telling that it is the moment that Gungnir, the spear of Odin, fails that the power of the Viking warriors also fails, and the world as the Vikings knew it came to an end.