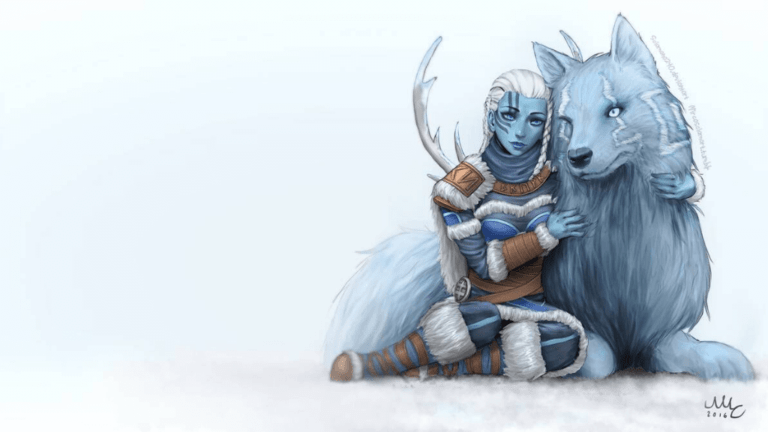 Often when we think of Norse mythology, we think of the Aesir as the gods – similar to deities from other ancient religions, responsible for different areas of life such as war, love, and fertility – and the giants as the opposing malevolent force.

But the truth is far less clear-cut. The Aesir and the giants do not seem to have been that different and are often described with similar superhuman attributes. In fact, they intermarried so often that most Aesir and giants had mixed bloodlines.

Perhaps the giant or jotunn that best represents the alignment between the two is Skadi. She was the daughter of the giant Thiazzi, wife of the god Njord and perhaps also Odin himself, and was considered by the Vikings as the goddess of winter and skiing (you know that you live somewhere cold when you have a goddess of skiing…).

The name of the goddess Skadi is of uncertain etymology, though it seems to derive from old Scandinavian.

It may have been the name of a geographic region with which the goddess was associated, probably somewhere quite far north, as the word scadin is connected with ideas of darkness, probably referring to a place that remained in almost constant darkness during the winter months.

In other sources (Prose of Edda) Skadi is also referred to as Ondurgud, which has the more clear-cut Old Norse translation of “ski god”.

We first encounter Skadi in Norse mythology as the daughter of Thiazzi, a giant that kidnapped the Asgardian goddess Idunn in order to steal the apples of youth which maintained the youth and beauty of the Aesir.

When Loki god of mischiefs retrieved the goddess, Thiazzi flew to Asgard in the form of an eagle to retrieve her. But the Aesir lit the walls of Asgard of fire, catching Thiazzi in the flames and killing him.

In order to gain vengeance for the death of her father, Skadi donned helm, coat of mail, gathered her weapons of war and headed to Asgard. The Aesir preferred to negotiate with Skadi, and the two sides agreed terms. Skadi was to be allowed to choose a husband from among the Aesir gods, and the Aesir had to complete an impossible task and give an impossible gift.

Skadi ended up choosing Njord god of the ocean, a Vanir god who had lived among the Aesir gods since the end of the Aesir-Vanir war. He was the father of Freyr and Freya, and the god of the sea, seafaring, fishing, and wealth.

Skadi had wanted the beautiful Balder, son of Odin and Frigg, for a husband. But the Aesir required that she choose her husband based only on their feet. Skadi examined the feet of all the male Aesir, and when she saw the most beautiful feet, she assumed that they were Balder’s. She received a rude shock when they were revealed to be Njord’s, whose handsome looks had been diminished by life at sea.

The marriage between the two did not last long, as they just seem to have been too different. Njord was reluctant to live in the cold mountainous home of Skadi, and Skadi was not keen on Njord’s realm by the docks. The two agreed to spend nine days and nine nights in each location in order to decide their future. In the end, both hated the home of the other so much that they decided to live apart, and their marriage soon dissolved.

The length of their marriage is unknown, as they are described as together in a number of stories. Skadi is with Njord when he learns that his son Freyr is smitten with the giantess Gerd. She is also described as accompanying Njord to a feast in Asgard after the death of Balder, at which Loki berated all the guests, including Skadi, with insults.

According to the Heimskringla book of the Ynglinga Saga, in which the gods are euhemerized, Skadi is described as unable to love Njord, and later marrying Odin and giving him many sons. One of these sons was called Saemingr, and he was a king of Norway.

Loki was tasked with the challenge of completing the impossible feat of making Skadi laugh. In order to do this Loki tied one end of a cord around the beard of a nanny goat and the other end to his own testicles. The goat and Loki then engaged in a game of tug of war, both squealing loudly. At the end of the game Loki dropped into Skadi’s lap, the giantess laughed.

For the impossible gift, Odin took the eyes of Skadi’s father Thiazzi and placed them in the sky as stars.

Skadi Among the Gods

After her marriage to Njord, Skadi appears to have been accepted among the Aesir gods. She is described in several sources as one of the goddesses that attended a feast in Asgard that occurred sometime after the death of Balder.

At this feast, Loki berates all the gods and goddesses, including Skadi. Loki taunts Skadi by reminding her that he was primarily responsible for the death of her father Thiazzi, and by claiming that Skadi was more friendly when she was in his bed.

Later, when the Aesir catch Loki and bind him to a rock for his role in the death of Balder, Skadi is described as hanging the serpent over Loki’s head that will drip venom painfully onto his face for eternity. Her role here seems to clearly cement her position among the tribe of the Aesir gods.

The role that Skadi will play in Ragnarok is not described anywhere, so it is left to us to speculate whether she will rejoin her father’s kin to destroy Asgard and the rest of the Norse cosmos, or if she will fight with her new family at Asgard’s last stand.