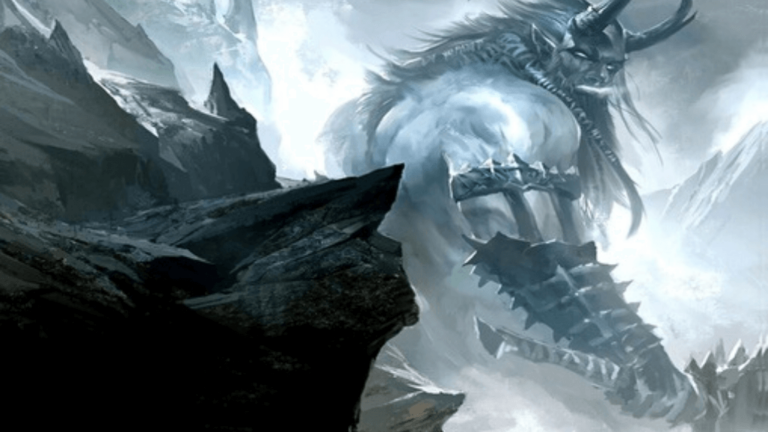 Most cultures have an “in the beginning” story that describes how the world came into being. The Vikings are no different.

At the center of the Norse creation story is Ymir, also known as Aurgelmir, the first of all beings. A primordial giant that was the hermaphroditic ancestor of all giants, the Vikings also believed that the world in which they lived was made from the body of Ymir.

But how exactly did the Vikings believe that the first entity came into being, and how did Ymir transform from the father of all giants into the earth underneath our feet? Also, what does Ymir have to do with the Christian flood myth? Read on to find out.

His name, Ymir, means “screamer” in Old Norse. He is also known variously as Aurgelmir, which means “sand or gravel screamer”, Brimir, which means “blood moisture”, and Blainn, the meaning of which is unknown.

According to the Norse creation myth, in the beginning, there were two worlds. Muspelheim, a world of fire and heat that existed high up in the branches of the world tree Yggdrasil, and Niflheim, a world of ice and mist that was placed among its roots – if the tree already existed at this point.

Between the two words was Ginnungagap, a great void, in which nothing existed. But, as the heat of Muspelheim and the cold of Niflheim met in this void, it created a primordial goop. It was from this good that Ymir emerged.

Ymir was sustained by the milk of a primordial cow Audumla, who also emerged from this goop in the void.

Audumla, in turn. was sustained by licking salt rocks that also emerged from the primordial goop. Through her licking, she wore away these rocks, and another being emerged from them.

This was the first of the Aesir gods, Buri, who then have birth to a son Bor (how or with whom is not stated), who in turn married the giantess Bestla, a descendant of Ymir.

Ymir was the father of all giants. It is said that he had a hermaphroditic body, and that both male and female giants emerged from his body, springing from the sweat of his armpits.

He also seems to have been the progenitor of other beings, as a six-headed creature is described as springing from his legs. The dwarves are also later described as being created from the body of Ymir.

Ymir was also an ancestor of Odin, as Odin and his two brothers Vili and Ve were the sons of Bor with his giantess wife Bestla, who must have sprung from Ymir, or be a descendant of one of the beings that sprung from Ymir.

The Death of Ymir

Considering this, what happens next in the creation myth seems to be a form of patricide. According to the story, Odin and his brothers were so concerned about the hoards of giants emerging from Ymir that they decided to slay the giant.

Most depictions of Ymir show him either suckling on the primordial cow Audumla, or being slain by Odin and his brothers.

The brothers then used the body of Ymir to create “the Earth”, which basically seems to be Midgard, the realm of men, and perhaps other worlds that existed around the center of Yggdrasil.

It is said that his blood became the sea, his body and bones the earth and mountains, and his skull was hung over the new world as the sky. Odin and his brothers also took sparks and flashes from Muspelheim and placed them within Ymir’s skull to create the stars, and used Ymir’s brain to create the clouds.

At this point, Odin and his brothers seem to have made a man and a woman, breathing life into some wood that they found on a beach. They placed their creations with the world that they build.

But the brothers saw that their creations were weak and vulnerable, and they were worried about them being hurt by the giants. So, they used Ymir’s eyelashes to create a protective boundary around this world of men. They then connected their own heavenly world, Asgard, to this world via the Rainbow Bifrost Bridge.

In Snorri Sturluson’s version of this story, he says that Ymir’s body expelled so much blood that it killed all the giants, with the exception of one, who saved himself by building an ark for himself and his family.

This part of the story is problematic and is probably the author trying to square the Norse creation myth with his own Christian stories.

According to the Poetic Edda, Odin asks the wise giant Vafthrudnir if he can name the oldest of Ymir’s kin. He responds that it is Bergelmir, who was Thrudgelmir’s son and Aurgelmir’s grandson.

This would then seem to make Bergelmir the “Noah” figure, the giant that survived the bloody flood. But, while this story suggests that the first generation of Ymir’s offspring were wiped out in some way, it does not suggest that Bergelmir was the only survivor of some cataclysmic event.

Also, the ark is described as for the giant and his family, presumably his wife and children. While Snorri Sturluson may not have considered it worth mentioning women and children among the survivors, we think it is pretty significant.

Ymir and the Flood

We think that the connection between Ymir and the flood myth is pretty spurious, and something that Snorri Sturluson created for his own purposes. But what do you think?

Flood myths are known to be quite universal, surviving from cultures from the Americas, Asia, Africa, and Europe. Do you think that the Vikings have their own version of the flood myth?