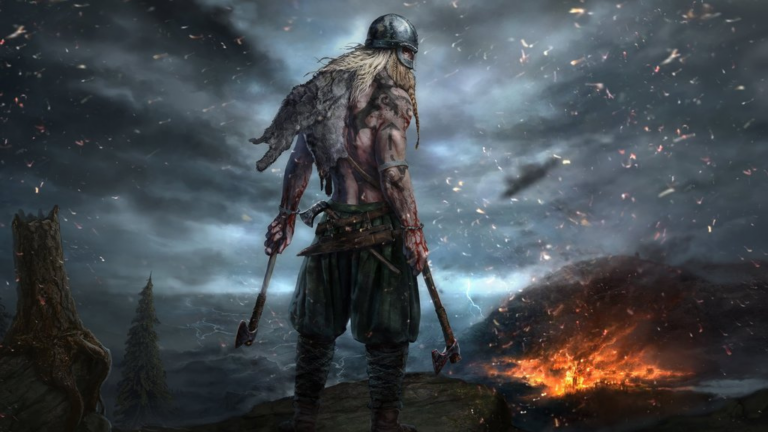 The Vikings were fearless warriors, but empires were not built by individual warriors. The Vikings had to form bands to conduct their raids and live in communities to protect what was theirs. That means that they had leaders.

Viking rulers were more like chieftains than kings, though some of them styled themselves kings within their ever-changing territories. Viking leaders were those that were recognized as the strongest, the richest, or the smartest, and therefore the most capable of leading the group.

But staying in power meant winning victories, retaining loyalty, and gaining enough wealth to share with their warriors so that they didn’t start to think that they could do better.

So, what set Viking chieftains apart from the other brave Viking warriors that fought by their sides? What was special about Rollo, Erik the Red, and Olaf? How did Leif Erikson, Cnut, and Harald Hardrada rise to the top of the flock ? Find out with these 12 mini-profiles of important Viking chiefs.

He maintained control through a mixture of ruthlessness and cunning, often playing his enemies off against each other.

Rollo’s descendants ruled the area for the next 300 years, and the group of Norsemen that followed him seeded the Normans, who later conquered England, Ireland, Sicily, and Antioch.

William the Conqueror was one of the Norman descendants of Rollo, he conquered England after the Battle of Hastings in 1066 and ruled there until his death in 1087.

He became the Duke of Normandy when he was still a youth and dealt with many plots. This gave him a familiarity with intrigue and taught him how to quash rebellion and consolidate his power.

As well as a warrior, William was an administrator. He ordered the compilation of the Domesday Book, a list of all the landholdings in England along with both their pre and post-conquest holders. This has become an important historical resource.

Living in the second half of the 10th century, Erik the Red was the founder and ruler of the Viking settlement in Greenland. He may have been forced to, as he was exiled from most of the rest of Viking Scandinavia.

Born in Norway, his father was banished from there for killing another Viking. The family made its way to Iceland, where Erik himself was later exiled under similar circumstances.

Forced out of his home, he sailed for new territories. When the period of his exile was over, he returned to find new settlers to join in him. Quite the propagandist, he called his new territory Greenland to make it sound more appealing.

Olaf Trygvasson was the King of Norway from 995 to 1000, converting many of the people within his territory to Christianity under threat of violence.

According to the sagas, Olaf was a son of the King of Viken, forced to feel to the east after his father’s death. First, he was sold into slavery, before finding himself as a warrior leader among the Kievan Rus Vikings. He married a queen, made an alliance with an Emperor, and eventually made his way to Ireland, where he married another princess.

This, along with his illustrious birth, gave him the credibility that he needed to put himself forward as a new king when disgruntled rebels wanted to oust the current King of Norway.

The son of Erik the Red, Leif Erikson is credited with being the first Viking to lead a group of warriors to the new world, specifically Newfoundland in Canada, at the start of the 10th century. Though he was not the first Viking to set foot on the land.

But Leif Erikson did not settle the new world, but rather succeeded his father as the chieftain of the Vikings in Greenland. He was highly influential in converting the Greenland Vikings to Christianity, much against the wishes of his father Erik the Red.

Better known as Cnut the Great, in the early 11th century this Danish Viking conquered Denmark, England, Norway, and parts of Sweden, creating a territory often known as the North Sea Empire.

He stabilized trade routes and revised laws to create uniform punishments for crimes across his territory. But, sadly, his successors did not have his cunning or fortitude, and his empire collapsed quickly after his death.

While some of the surviving sources suggest that he thought that he had supernatural powers, the majority of the evidence suggests that Cnut was a no-nonsense ruler that didn’t tolerate fools.

Harald Hadrada was the King of Norway from 1046 to 1066, and tried to claim leadership of both the Danish and English throne during that time. He always had his eye on conquest, and probably wanted to recreate Cnut’s North Sea Empire but never managed.

Forced out of Scandinavia when his family lost their throne, Hardrada is another Viking that learned the ways of war as an exile living with the Kievan Rus Vikings and fighting as a mercenary for the Byzantine Emperor.

In the chaos that followed the death of Cnut, Hardrada returned to Denmark. He eventually ended up negotiating to share rule with the current strong man, Magnus the Good, and then became sole ruler when Magnus died suddenly the following year.

The leader of Vikings fame, he is probably an amalgam of several Viking warriors rather than a real historical figure.

He was both a Danish and a Swedish king, and it is claimed that he slew dragons during the 9th century. He is credited with leading many successful raids in France and England. But, as such a successful warrior, he also seems to have had an ego.

Ragnar’s downfall was when he decided that he could take England with just two ships. Instead, he was captured by King Aella of Northumbria and thrown into a snake pit to die.

One of the many sons of Ragnar Lothbrok, no one really knows why he is called the boneless, but it may have been because he was a cripple. But Ivar had an iron will and this did not hold him back.

Ivar and his brothers were exiled from Ragnar’s territory to make way for his older brothers, as was the custom. A cunning tactician, Ivar led his brothers as they raided around Scandinavia. Following the death of his older brother, he returned to Ragnar’s territory. Owing to his intelligence, Ragnar put Ivar in charge of his kingdom before setting sail on his ill-fated raid of England.

Ivar then went with his brothers and the Great Heathen Army to avenge the death of Ragnar. While his brothers went into battle hugely outnumbered and lost, Ivar made alliances and created a foothold in England. He was eventually responsible for the capture and execution of Aella.

Daughter of Erik the Red and sister of Leif Erikson, Freydis was a Viking warrior in her own right. She followed her brother to the new world with her own band of warriors to claim booty and glory at the start of the 11th century.

According to one story, one night her camp was raided by locals, and while most of the Vikings fled in fear, Freydis singlehandedly fought off the natives while eight months pregnant.

She is also thought to have been ruthless. She is said to have convinced two Icelandic brothers to partner with her on a new world expedition for a 50-50 cut, but she then claimed that the men mistreated her and had her own men kill them in order not to have to share their booty.

Hastein was a Danish Viking who actively raided around France, Spain, and the Mediterranean in the 9th century. He is often associated with Bjorn Ironside.

At the Italian city of Luna, which the Vikings thought was Rome at the time, it was Hastein who came up with the ploy to enter the Christian city. He claimed to be mortally wounded, to have converted to Christianity, and that he wanted to be buried on consecrated ground. The city let the body and 50 men clad in black robes in for the burial.

Needless to say, the Vikings sacked the city before continuing on their way. Though they never made it to Rome.

Sweyn Forkbeard was a Danish king who also managed to gain control of Norway for a brief period of time at the start of the 11th century.

He also cut his way through England and was made king of England in December 1013, only to die in February 1014. But his son Harald held England after him, and then passed the territory to be part of the empire of his brother Cnut the Great.

So, based on the stories of these great Vikings, what does it take to be a Viking chief? Strength, bravery, cunning? What do you think it took to become a leader among the Vikings?