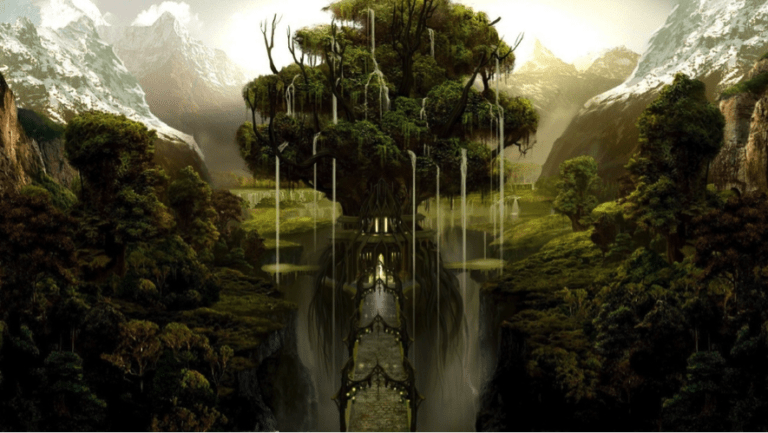 But what exactly was Yggdrasil, where did it sit in the Norse cosmos, what role did it play in the most important stories in Norse mythology, and why was it vital to the Viking’s belief system?

In Norse mythology Yggdrasil is described as an enormous, ever-green ash tree that cradles the nine realms of Viking myth in its roots and branches, connecting and nourishing all things.

Exactly which nine of the Norse realms (more than nine are described in the Norse sagas), is not definitively listed in any place and must be inferred from a variety of sometimes conflicting Norse mythology stories.

The sources also do not agree on how the realms were linked to Yggdrasil. For example, some stories say that Asgard, the realm of the Aesir gods, was located in the tree’s highest branches, while others suggest that one of the roots of the tree extended into the land of the gods.

The nine Norse realms (probably) connected to Yggdrasil are:

The third well, Hvergelmor, the burning hot well, is located in Niflheim. This well feeds eleven rivers that flow through the Norse realms. The dragon Nidhogg lives here and gnaws on the roots of Yggdrasil. The stag Eikthyrnir also lives here. He feeds on Yggdrasil, causing water to spout from his horns and replenish the well.

The branches of Yggdrasil itself are also home to an unnamed eagle that lives at the top of the tree, and a squirrel named Ratatoskr that runs up and down the tree passing messages between the eagle and the dragon, who hate each other. Ratatoskr is a trouble maker and sews the animosity between the two. Yggdrasil is also home to four stags, representing the four winds, who eat the tree buds.

The activity of these animals probably explains why Odin claims that Yggdrasil lives in more pain than anyone can comprehend.

What does Yggdrasil mean?

The name probably means Horse of Odin, king of the Norse gods, in Old Norse, which is the equivalent of gallows of Odin. This would be a direct reference to a story in Norse mythology about Odin hanging himself from the tree to gain knowledge of the runes (see below).

In this case, Yggdrasil is interpreted as a combination of Yggr, which means terror and was one of the many names given to Odin, and drasill, which means horse.

It has also been suggested that Yggdrasil is a combination of Yggia, which means yew tree, and drasill, which means support, to form Yew Pillar. This seems unlikely since in all the stories of Norse mythology Yggdrasil is described as an ash tree.

Mimameidr may also have been an alternative name for Yggdrasil. Mimir was the wisest of all beings who gained his wisdom by drinking every day from the well Mimisbrunnr, the Well of Wisdom. In one story from Norse mythology, Odin convinces Mimir to let him drink from his well in exchange for his eye.

Mimameidr means Mimir’s Tree, and therefore may be a reference to Yggdrasil as it was fed from the well of Mimir. Mimameidr is probably also synonymous with Hoddmimis Holt, which means Mimir’s forest.

Yggdrasil is mentioned in both the Poetic Edda, a 13th century compilation of older Norse sources, and in the Prose Edda, written in the 13th century by the Icelandic Christian Snorri Sturluson.

Most of the references in the two books are to descriptions of the tree and how it holds the worlds of Norse mythology together, described above. However, Yggdrasil also features in two stores, the story of Odin’s quest for knowledge of the runes, which probably gives the tree its name, and the prophecy of Ragnarok.

Odin and the Runes

Odin, the king of the Aesir gods and the god of both war and wisdom, desired to have knowledge of the runes. The runes were considered as more than just symbols of the concepts that they represent, but to spread their intentions across the cosmos. As such, access to the runes could give one knowledge of and power over destiny.

Yggdrasil is home to this knowledge as it is fed by the Well of Urd, where the Norns, the Fates, dwell and control destiny by carving the runes onto Yggdrasil itself. Odin watched the Norns from his seat in Asgard and envied their power, and so determined to have it for himself.

To prove himself worthy of the knowledge, Odin willingly hung himself from the Tree of Life while pierced by his own spear for nine days, refusing aid of any sort. From there he stared downwards toward the Well of Urd and called the runes. On the brink of death, he gained the knowledge that he desired.

Odin later used his knowledge of the runes to heal emotional and bodily runes, bind his enemies and render their weapons useless, free himself from constraints, put out fires, expose and banish practitioners of black magic, protect his friends in battle, wake the dead and win lovers.

However, his knowledge of the runes cannot prevent his fate at Ragnarok.

As the Ragnarok prophecy predicts the destruction of the nine worlds of Norse Mythology, it is no surprise that Yggdrasil has a role to play in this destined apocalypse.

According to the Ragnarok prophecy, a rooster will warn Odin that the end of the world is nigh. Odin will then travel to Mimisbrunnr, one of the wells that feeds Yggdrasil, and consults Mimir, the wisest of all being. Here he will be told that there is nothing he can do to avoid his fate, but he and his allies will choose to fight anyway.

Meanwhile, the coming of Ragnarok is heralded in the world of men by a series of disasters including famine and war. Eventually there will be violent earthquakes in Midgard, caused by shockwaves that travel the length of Yggdrasil. These same shockwaves will crack open the world of Muspelheim, allowing the giants trapped there to move into other realms.

The earthquakes will also shake free the ship Naglfar, which is made from the fingernails and toenails of the dead, which Loki will use to sail to Asgard with his allies to battle the Aesir gods. Among Loki’s allies are his daughter Hel, goddess of the underworld, and the unworthy undead. This suggests that the ship may be moored in Helheim, and that Naglfar may have special properties that allows it to transport the dead out of Helheim.

While the destruction of the nine worlds of Norse mythology is described, the specific fate of Yggdrasil itself is not detailed in the Ragnarok prophecy. It seems likely that the Tree of Life survives to give birth to new life as two humans, Líf and Lífdrásir, are described as surviving the destruction by hiding in Hoddmimis Holt, which was probably another name for Yggdrasil. They will then go forth to repopulate the world of men.

Why was Yggdrasil so important for the Vikings?

Yggdrasil played an essential role in Norse mythology by connecting the tangible world of the Vikings (Midgard) with the intangible worlds of the gods, giants and other creatures of myth. Yggdrasil helped the Vikings understand their place in a mythological universe that was mostly hidden from them.